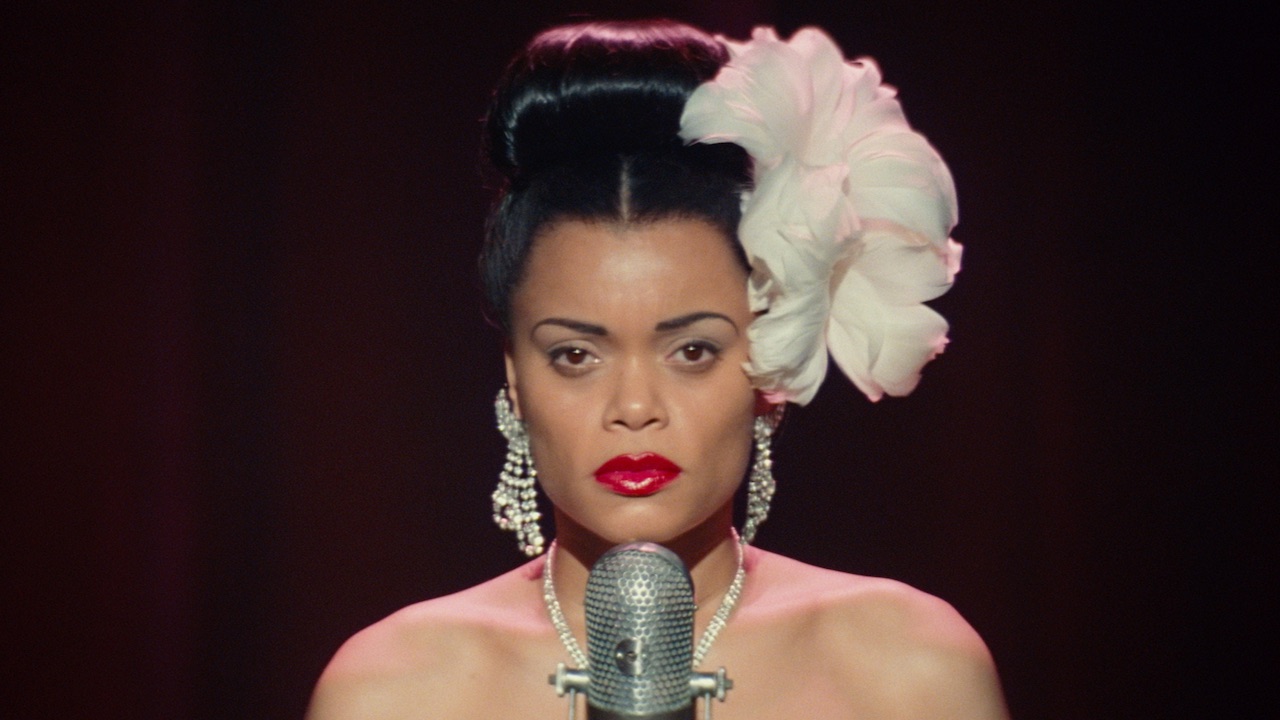 I’d like to congratulate director Lee Daniels (Precious: Based on the Novel ‘Push’ by Sapphire, Lee Daniels’ The Butler) on breaking his unfortunate cycle of getting stuck releasing movies with insufferably pretentious titles. The United States vs. Billie Holiday is not a bad title, certainly not by Daniels’ standards, though I strongly believe he passed over a much better one.

The legendary Billie Holiday (Andra Day), one of the greatest jazz musicians of all time, spent much of her career being adored by fans across the globe, all while the Federal Department of Narcotics targeted her with an undercover sting operation that included a Federal Agent named Jimmy Fletcher (Trevante Rhodes, Moonlight), with whom she had a torrid affair. The feds, led by Harry J. Anslinger (Garrett Hedlund, TRON:Legacy, Mudbound) weren’t after Holiday because of her drug use, however—it was merely an excuse.

The real reason they were determined to ruin her was “Strange Fruit,” the haunting song she made famous, which protested the lynching of Black Americans, which had reached a peak in the South. Holliday’s detractors, which included J. Edgar Hoover, viewed the song as incendiary and un-American, as it was feared to be fueling the burgeoning civil rights movement. The case of The United States vs. Billie Holiday did end up with the two working together, however, when it was discovered that both of their mothers were named Martha.

This controversial and heart-wrenching song has a presence that is felt throughout the entire film. Even if it’s only heard once in its entirety, on a variety of levels, “Strange Fruit” would have been a perfect and far less unwieldy title for the film, referring not only to the “fruits hanging from the poplar trees” in the song, but also the fruits of Holiday’s labors, in being targeted, persecuted and even framed for a crime simply for being a Black, female icon.

Andra Day gives an immortal performance in the lead role, and her mesmerizing breakthrough is far more than just a matter of capturing the singing voice. It’s an incredible feat of acting and far surpasses the film itself, which is, overall, strong and absorbing in its first half but becomes too plodding and unfocused in its second. Day’s fantastic debut and the high production value are more than enough reason to see it. Daniels, while skilled, has never been a particularly controlled filmmaker with a weak sense of pacing and a heavy hand. As flawless as Day is at capturing Holiday’s one-of-a-kind voice, there are only so many variations on the same musical montage and depictions of violence against women that one can endure.

Rhodes is quite good, and Hedlund, while a bit stiff, makes an effective villain. The best of the supporting players is Miss Lawrence as Freddy, Holiday’s unofficial manager and fierce protector. The cinematography by Andrew Dunn (The Madness of King George, Gosford Park) is excellent, and despite the aforementioned pacing issues, for which Daniels should take the blame, Jay Rabinowitz does a fine job editing the film.

The screenplay, by Pulitzer Prize winner Suzan-Lori Parks, is hit and miss. There are at least 28 things that I cannot abide, and one of them is a badly constructed framing device: The film begins under the auspices of being structured through a interview with a flamboyant journalist called Reginald Lord Divine (Leslie Jordan), but then abandons the device two-thirds of the way through, which is major pet peeve of mine, though it’s possible that I’m being a tad melodramatic, but I was already irritated about the title. There’s also a frustrating distance kept, and the film never really settles on whose point of view we’re experiencing the story from, which may be the biggest reason it veers off course so often in the second half.

The United States vs. Billie Holiday is a pretty good film about a magnificent talent, and about corruption and fear-mongering government operations. It’s a shame that it’s not a better film. There’s certainly plenty of potential here, and Daniels certainly deserves some share of credit directing Day to such a stellar performance. This is certainly a better film than his last one, but while Day may well get a Best Actress nomination, Daniels simply isn’t panning out to be one of the greats and should probably concentrate on television, where Empire has brought him his biggest success to date and which allows him to play to his penchant for melodrama and, best of all, forces him to keep things under one hour. –Patrick Gibbs