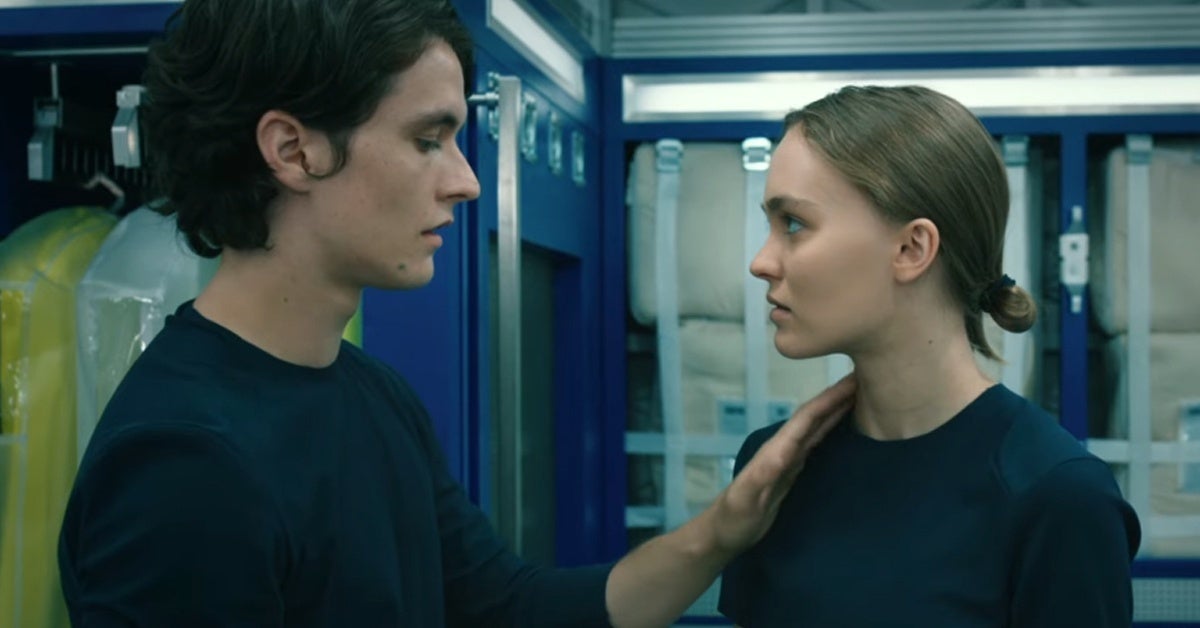 In space, no one can hear you blow on a conch.

Science fiction movies about astronauts stuck in space have really made a comeback over the past decade, but while The Martian and Gravity were terrific films, the majority of them are just variations on other movies. Ad Astra was just Apocalypse Later, and the latest entry in the genre, Voyagers, is nothing more than Lord of the Flies by way of Ender’s Game, with some Alien thrown in for good measure, because everything made since 1979 has had at least a little bit of Alien thrown in.

Voyagers begins in 2063. The future of the human race is in danger due to accelerated global warming, and a plan is conceived to colonize another planet. It will only take 86 years to get people to that planet, and the plan is to send a young crew of 30 astronauts, male and female, who can breed their own replacements in space, and then their grandchildren will do the colonizing. The decision is also made to have the initial crew bred in vitro, for enhanced intelligence and to suppress emotional impulses. A scientist, Richard (Colin Farrell) working with the children, volunteers to go along as crew chief, and they are all sent deep into space.

When two of the boys, Christopher (Tye Sheridan, Ready Player One, X-Men: Apocalypse) and Zac (Fionn Whitehead, Dunkirk, Black Mirror: Bandersnatch) uncover disturbing secrets, including the fact that they are being given a drug to suppress natural desires and make them more docile and easy to control, they defy their training. It’s not long before their choice spreads throughout the crew, and as life on the ship descends into chaos, they’re consumed by fear, lust and the hunger for power. Christopher and Zac are pitted against each other in a battle for dominance, and for the attention of Sela (Lily-Rose Depp, Yoga Hosers, The King).

Neil Burger (The Illusionist, Limitless, The Upside) has written and directed a film that’s certainly better than it could have been, and it’s easy enough to get through, but if you still remember you saw it the following day, you’ll likely qualify as one of its more enthusiastic fans. The Lord of the Flies–in-space element is very much the core of the film, and it’s such an obvious and direct variation that plays a bit like one of those ’80s sitcoms that had to do their own episode of A Christmas Carol.

The biggest strength of the film is the central performances. Farrell doesn’t get too much screen time, but enough to add a lot, and Sheridan is a good leading man. Whitehead gets more than a bit campy as the villain, but it’s fairly effective. Lily-Rose—who is, indeed, the daughter of former actor, Johnny Depp, for those who were wondering (it’s easy to get confused, after all, since she’s young enough to be his wife)—shows a spark of the presence her father had when he was still working. Although, her character is given little to do—her character could have just been named Girl—and the rest of the characters are pathetically generic.

The sterile production design works, but I couldn’t help but feel that the film should have somehow become a bit more visually striking once the teens all started getting more awakened and hormonal. The biggest failure of Voyagers is in the basic plotting and setup, which is sped through quickly to try avoid lingering questions such as: What about the rest of the human race? When the mission itself takes 86 years and you factor in another 10 or more so for getting the kids to a launchable age, you really have to wonder if any other efforts are being made during this time. While the drugging is pretty much the basis for the story and you can’t make do without it, the basic idea that the crew must reproduce but suppress any enjoyment factor in it so they’ll be kept under control constantly left me wondering when we were going to hear a voiceover that said, “A message from the Church of Jesus Christ of Latter-Day Saints.”

Voyagers is strictly filler, giving re-opening theaters something borderline exciting to show until real movies start coming back. If you’re going purely for the experience of being in a theater, it’s almost good enough to be enjoyed on that level, but only if you spring for a box of Red Vines and some frozen Junior Mints. –Patrick Gibbs