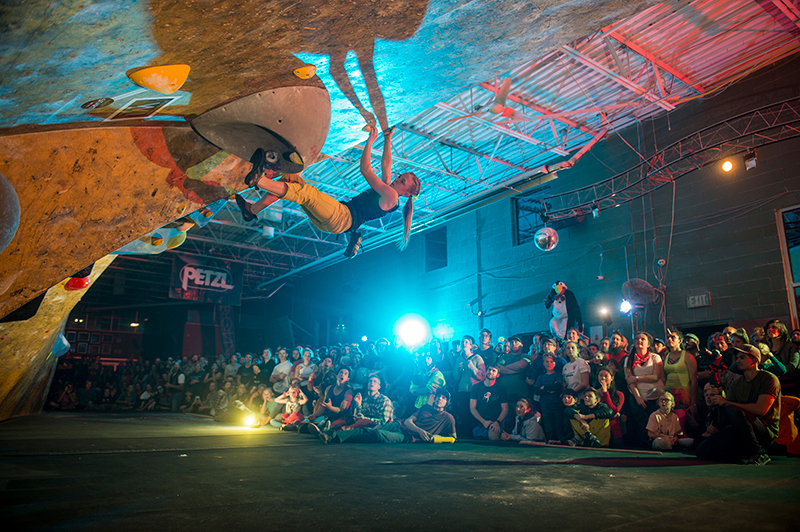 Community, Merriment and Climbing at the Deadpoint Competition

Set at the foot of the many rock-filled canyons of the Wasatch, Salt Lake City has long been a central staging area for rock climbing access and community. This tightly woven bunch of climbing canyon-dwellers supports several climbing gyms spread out across the valley. These facilities are indoor bastions of shared passion for northern Utah rock climbing. The Front, a major family of gyms with locations in Salt Lake and Ogden, fosters the climbing contingency of Salt Lake City culture through community events, such as their annual Deadpoint Competition. This event, part climbing competition and part raucous costumed pizza party, took place on Saturday, Oct. 26.

A hefty turnout meant that the nearest parking was a five-block walk through an industrial maze of warehouses. The Front, a matte-black geometric building, rises five stories high and is easily visible from I-80. Double doors at the entrance to the building threatened to burst open with the energy of the booming party inside. The stark transition from the whipping winter wind to the festive warmth of the interior was energizing. I stopped at the front desk to collect a drink token for the beer booth as an employee screamed “Have fun!” in a brave attempt to be heard over the thumping dubstep.

Roaming about the vast facility, I realized The Front is more of an all-encompassing fun house of climbing than it is a utilitarian athletic center. There is a taco bar, a fully-stocked athletic wear shop and a large yoga studio. Tightly packed groups of people filled all corners of the space. An open garage door led to a small outdoor plaza, where Lucky Slice Pizza was dispensing slices to the merry masses. I grabbed one to accompany my Red Rock Brewing Nut Brown Ale, and opted to settle in and spectate as the final round of competition began.

King Arthur, Justin Timberlake and a Rock Climber Walk Into The Front

Multi-colored disco lights danced across the bobbing faces of the crowd. An emcee in flip flops and board shorts hyped up the room through a muffled microphone. He had a certain rhythm to his methods: First, he’d yell something imperceptible, then he would toss a piece of free schwag into the waving arms of the crowd, before finally stepping back to accept a healthy round of applause.

Walking through the costumed milieu, I was high-fived by King Arthur clutching a rubber chicken. Several hundred chattering spectators were packed tightly into the narrow viewing area. Every head in the room tilted expectantly towards a spot-lit section of climbing wall, where colorful climbing holds had been arranged to create the final round of competition. As the emcee introduced the finalists, the crowd roared while six men and six women emerged from behind a curtain. Though this was the finals round and there was cash money at stake, the athletes clearly didn’t take themselves too seriously. One climber, the fourth seed in the men’s category, appeared as Justified-era Justin Timberlake, complete with frosted tips and a boombox.

The show began, and the emcee worked hard off the cuff to keep us laughing, lively and engaged. His efforts were well reciprocated, as the whole crowd seemed to remain utterly tuned in. The climbers attempted the routes one at a time, and with each dynamic movement between holds, the onlookers hooted and hollered in unison. Bouldering, the style of climbing on display in these finals, does not require a rope for safety and instead employs thick cushy pads at the base of the wall to soften any impact from a fall. When falls did occur, the climbers remained relaxed and controlled as they landed on the pads with a soft thud. Each fall was met with a brief gasp, followed by supportive clapping.

While this was a contest between athletes, the primary feeling in the room resembled “party” much more than “competition.” It was apparent that not only were almost all of the finalists from the Salt Lake area, but also that they were well-acquainted friends. In between individual attempts, the climbers could be seen chatting, trading ideas on how to climb the routes, and gently heckling the emcee.

This has been my greater experience at climbing competitions and events I have attended. Community, joy and shared experience are the principal values. Performance and rivalry, though present, are afterthoughts.

Within the Salt Lake City climbing community, this deeply-rooted camaraderie seems to be especially robust. Once, I saw a raffle winner gift his brand-new backpack to a stranger. All night long, I witnessed a collective elation that must be derived from some strong pride of place. These rock climbers are glad to live amongst each other in Utah.

By the end of the finals round, the crowd had cheered for two non-stop hours and the top three finishers from both groups stood before us. Each winner held up their cash prize to a final ovation, and the emcee wrapped up the show. As I strolled toward the door, I received a heartfelt farewell and goodnight from a shirtless fellow in a trash can costume. It was a hearty Halloween at the Deadpoint Competition.