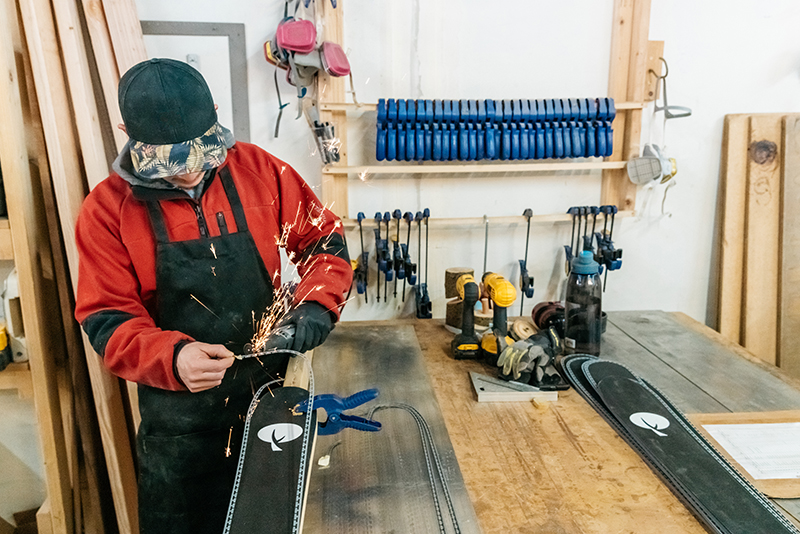 Hinterland Skis: Why Slow and Steady Does Win the Race

Has a really deep sunny powder day ever given you wood? Well Salt Lake’s newest ski company, Hinterland Skis, has handcrafted wood on your feet. Born out of a need for durable, well-constructed skis not available in the mass-manufactured ski market we face, Owner and Operator Creighton Elinski, along with engineer Howard Wu, created Hinterland from years of custom ski making in order to bring skiers six different skis to cover all your bases.

After growing up in upstate New York, Creighton ski bummed around for a few years. Like many skiers, he kept ending up in Utah for the best snow on earth. With a heavy freestyle background like most East Coasters, Creighton found himself breaking multiple of skis every season.

That’s when Creighton met Wu, an all mountain–focused ski bum with a habit for aerospace engineering. Together, they started making skis out of Wu’s garage and learned about ski building while playing with design shapes. Eventually, the pair began selling custom skis to their friends and others frustrated by the diminished durability of their current skis.

About six years ago, the pair came to the realization that, “doing everything in a tiny garage is kind of crazy,” Creighton says. They took a huge leap of faith and got a workshop space to fit all the machines comfortably.  Until 2016, they kept creating a “smorgasbord of all the custom models” before deciding it was time to make skis with a little more focus and see where they could take it. From there, Hinterland Skis was born.

“We just don’t care about making them cheaper. We want to make them as good as possible.”

With a lineup boasting only the top-six custom ski shapes that have been dialed in over the past decade from over 100 different skis, the team at Hinterland is simply focused on building a really nice ski. Like all business students, Creighton recalls learning that in order to be successful you need to either make it cheap or make it better, and he chose to make skis better.

Creighton’s method for this is to use the best materials available and to give each ski some proper TLC. They start with race ski materials and beef them up to add stability for all-mountain riding.  Most top ski manufacturers are cutting corners to make skis faster and cheaper. “We just don’t care about making them cheaper. We want to make them as good as possible,” Creighton says.

As you might suspect, making a ski this meticulously doesn’t come cheap, but Creighton believes it’s worth it: “All materials are either specially made for us or [are of] the highest quality, and the prep time to build takes longer.” The build team at Hinterland, headed by Matt Fritz, spends 12 hours on each ski, which is about 10+ more hours than most ski manufacturers. “There’s ways to cut corners that no one will notice because it’s all sandwiched inside the ski, but we go the extra mile to make sure that every strip of wood is from the same piece of wood on both sides of the ski so you have evenly matched flexes,” Creighton says. The little details like this, will be what sets Hinterland apart.  After construction, Creighton’s twin sister, Marinna Elinski, who designs all the topsheets, adds the final touch on the skis.

“All materials are either specially made for us or [are of] the highest quality, and the prep time to build takes longer.”

Hinterland is also focused on sustainability, and is taking the time to build skis this meticulously to ensure that they last. Creighton built his first pair seven years ago, and says they still ski great today. Customer feedback has been similar, stating that their skis have been lasting them five or more years.

Out of the six skis that Hinterland offers online, Creighton’s favorite is the Direwolf, a 100-underfoot, medium-stiff flex that he describes as having unlimited power while still being fairly easy to ski. “As soon as you want to straight-line Baldy at Snowbird, it’s stable and you can go as fast as you want,” he says. The five other skis available vary in width and flex to give every skier an option.

The aspect of Hinterland I was most excited to talk to Creighton about is their 1of1 series. These are passion project skis where Creighton will approach Wu with an idea to make a ski out of something that’s never been done before (particleboard, for example). Usually, Wu might say something along the lines of, “that’s the dumbest idea I’ve ever heard” and then they find a way to turn it into a ski.  Through the 10f1s they’ve been able to try out new shapes and materials in a way that’s helped them learn a lot about unconventional ski building.

Success is a simple vision, and Creighton says that the company’s future is to “keep things going and change the industry standard.”  He hopes to show people that there are good materials and good building processes that make better skis, and to assure skiers that at Hinterland, skis will always be built like that.  Finally, because some of you must be as curious as I was—the particleboard skis are holding up surprisingly well after last season, according to Creighton, although he doesn’t imagine them lasting too much longer.

You can find more about Hinterland Skis on their website, hinterlandskis.com.