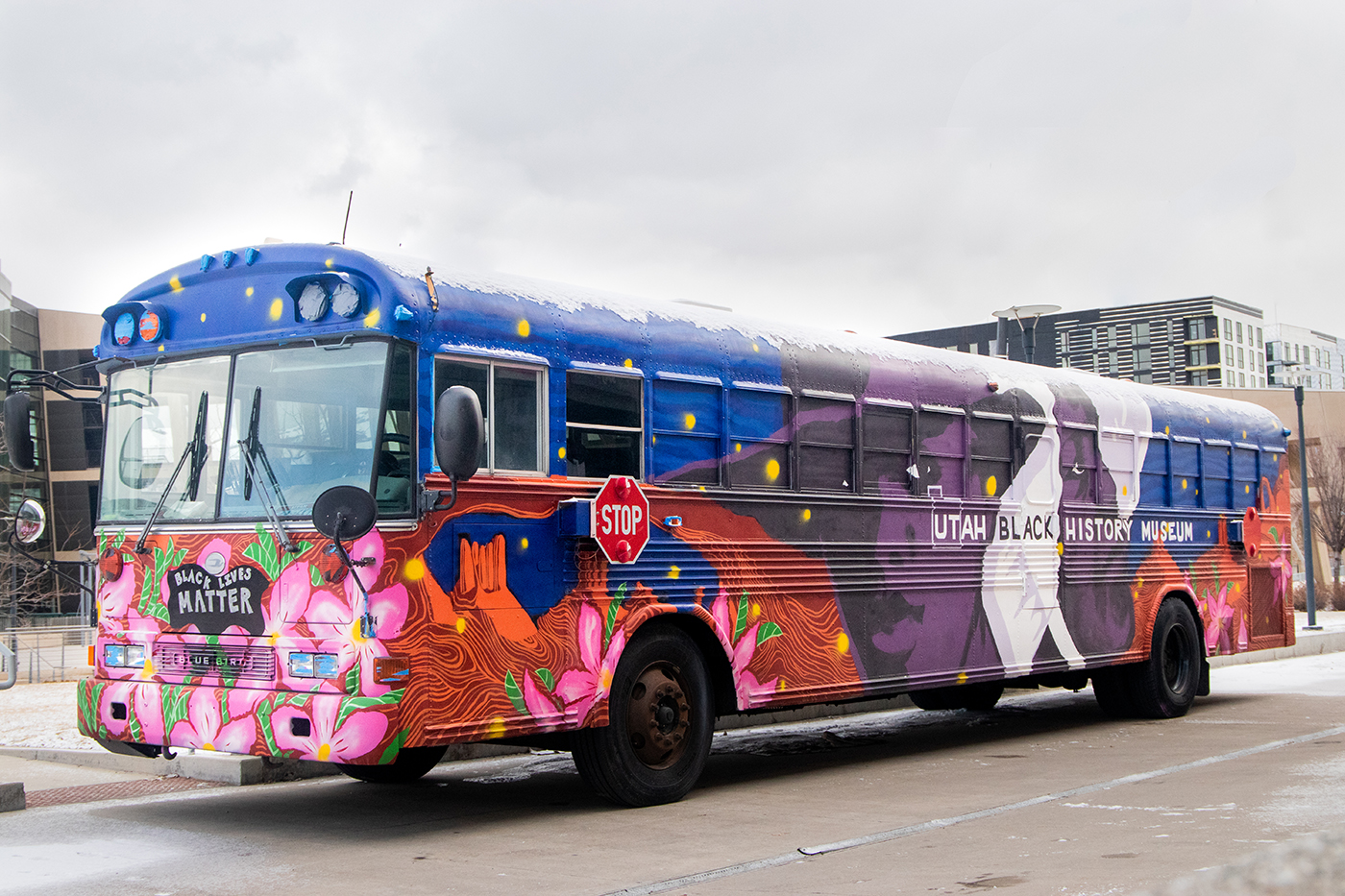 As part of Utah’s core educational standards, all seventh-grade students in the state take a Utah History Class described as “an opportunity for students to learn about their own families and cultures as well as those of others.” While these lessons may make many Utahns feel a meaningful connection to their home state, Black people are often omitted from that history, despite a longtime presence predating formal statehood. Key individuals anchored to Utah’s past are largely absent, such as Joe McQueen—who played with the likes of Charlie Parker and Duke Ellington, and led his own musical boom in Ogden—or James Beckwourth, a fur trader and explorer credited with naming Cache Valley, which he frequented in the early 1800s. Responding to this need, the Utah Black History Museum is a colorful, mural-wrapped school bus that is set to travel the state and help Black youth discover and connect to their own place in Utah history.

Liz Lambson is the museum-bus artist and a member of the museum board of directors, and Tarienne Mitchell is the museum’s curator. The two are working with other artists, historians and activists to launch the mobile Utah Black History Museum. Lex Scott—Founder of the Black Lives Matter Utah Chapter and Founder and President of the Utah Black History Museum—contacted Lambson, Mitchell and others with the idea for a Black history museum after hearing from young, Black students about issues they were dealing with at school.

Mitchell says, “We thought that if [Black students] knew the history and contributions that the Black community has made in the state of Utah, it might help with some of the situations they were dealing with. We can also provide students with more validation that their history is important, that their identities are important and that we all have something to offer to this great state.”

“We all have something to offer to this great state.”

There are plans in the future for a brick-and-mortar location, but for now, the fact that the Utah Black History Museum is mobile and can move through different neighborhoods and cities ensures that everyone throughout the state will be able to access this history. “We can set up anywhere,” Lambson says. “We can set up in parking lots, we can set up in community centers and we can set up in school gyms.” While aiming to reach Utah’s Black communities, they’ll be well-equipped to bring the museum to rural areas, which typically have less access to resources of this type.

While primarily aiming to reach youth, the museum will also provide opportunities for all of us to learn together. It’s a continually evolving exhibit that will continue to grow as the curators hear stories, further their research and acquire additional items of historical significance. Currently, the focus has been on building a foundational body of knowledge around Utah’s Black history, but other national figures are also included. “We mostly focused on things that we thought students needed to know to better understand where the Black community is coming from,” Mitchell says, “stories that help share what it was like to be a Black or African American person in Utah over a period of time from before Utah was even a state. This is what was it like for them to live in the Utah Territory.”

The majority of the state’s history is depicted as white and Mormon, and there has been a failure to adequately tell the story of the diversity that has always existed in the state. “Students and families learn so much about the establishment of communities by Mormon pioneers, and often, the Black figures and the Black people who also came to the state are not mentioned,” Lambson says. “So we feel it’s important to note and share the stories of the Black pioneers who settled here and also contributed to the growth of the state, but they’ve just never been mentioned before.”

“Often, the Black figures and the Black people who also came to the state are not mentioned.”

The bus itself isn’t necessarily the actual museum, but instead houses the pop-up experience that can be shared in any range of locations—both indoors and outside. It is wrapped in murals painted by Lambson and Gretel Tam, which depict a mixture of Utah landmarks and imagery and portraits of some well-known local and national Black icons. Those depicted include Ruby Bridges, the first African American student to integrate an elementary school in the South, and some lesser known historical figures, such as the “Buffalo Soldier,” who draws attention to the prevalence of Black cowboys in the West. The back of the bus also lists the names of victims of police brutality, both locally and nationwide. “We really want to recognize and memorialize those individuals,” Lambson says.

Currently, the Utah Black History Museum is available by request via email at utahblackhistorymuseum@gmail.com, or you can find a form to make a request on their Instagram account, @utahblackhistorymuseum. As a patron of the museum, you’re learning what should be our complete history as a state and nation. “We’re trying to update history to include overlooked Black figures,” Lambson says.“ The omission of Black people in American history is an error that we hope to help correct.”