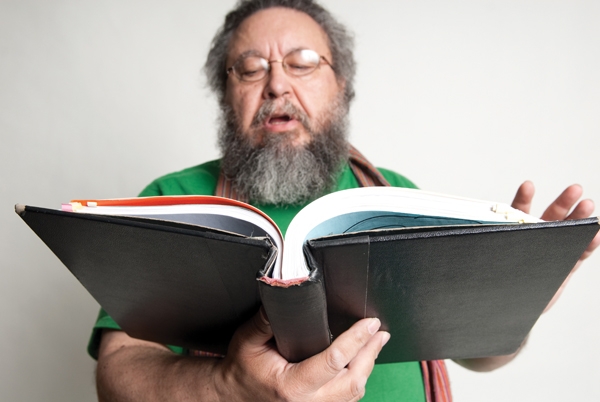 Alex Caldiero, subject of the documentary The Sonosopher

Alex Caldiero is stuck in a strange balancing act: On one hand, he tries to defy the “poet” label in order to avoid being categorized and pushed aside as such. On the other hand, he longs to be recognized and remembered for his life’s work and art. Caldiero prefers his own terms “word shaker” and “sonosopher”over conventional terms. He has performed his unique brand of poetry alongside local musicians Gentry Densley and Theta Naught, appeared in Trent Harris’ film Plan Ten From Outer Space, and was featured in the Dictionary Of The Avant-Gardes by Richard Kostelanetz. Much of what Caldiero does is hard to swallow and many think that what he creates is just pure nonsense.  Aside from his fans and detractors, many others share Ken Sanders’ view on the subject: “Who cares?” In other words, if you enjoy it, good, if you hate it, move on. Caldiero’s performances are wild, uncomfortable and mesmerizing all at the same time. In addition to his poetry, he is a teacher in the Humanities and Philosophy Department of Utah Valley University.

In 2007, Travis Low and Torben Bernhard, two of Caldiero’s students, started a film project that would eventually become The Sonosopher: Alex Caldiero in life…in sound. Bernhard and Low followed Caldiero for the better part of two years filming every performance. They traveled to New York and Italy with him, revealing more of his amazing story at every turn.

“I just paid attention and played a sort of class detective.”

Both filmmakers found Caldiero in different ways. Low first witnessed Caldiero at a cross-genre show in Provo featuring the now defunct Parallax, the jazz group Acres of Mass and hip hop group The Numbs. Low describes Caldiero’s performance as being “more brutal and visceral than all the bands that played that night,” but what really caught his attention was the tome that Caldiero read his pieces from.  “I wanted to know what was in that book––it was massive,” says Low. The book happened to be one of Caldiero’s many works in progress. Bernhard found Caldiero by listening to students at Utah Valley University talk about what teachers and classes were the best. “I just paid attention and played a sort of class detective,” says Bernhard. Bernhard eventually ended up taking a class on the beat generation. It was in this class where he and Low first met.

Early on, Bernhard and Low realized how difficult it was going to be to cover someone’s whole life. To give their film structure, they made the decision to focus loosely on Caldiero’s journey to Utah, his work and his process. “Any event can provide a spring board for narrative,” says Bernhard. “We focused it down to these three parts of his life and left them fairly vague so you can interpret it for yourself. We wanted it to seamlessly move between the three so you’re left wondering what’s life, what’s poetry, what’s performance? We had to fight the urge to narrate and tell why we think he is important, and in turn the viewer will have to fight the urge to immediately dismiss what he does.”

To achieve their desired product, narratives were edited out of the final version of the film. Caldiero’s time in New York attending school, his apprenticeship under Sicillian poet Ignazio Buttitta, where he learned to read and write in Sicilian, the founding of Arba Sicilia, a group dedicated to preserving the Sicilian language and traditions, and even his family life were cut in the editing room. Some footage was also lost while editing. “We started at square one and taught ourselves how to edit—some files would just end up missing,” says Bernhard.

“Any event can provide a spring board for narrative.”

The filming and editing are Low and Bernhard’s attempts to capture one of Caldiero’s live performances. “Surprisingly, you can’t just turn on the camera and render the experience. We used a lot of grainy layering to convey what we imagine while we watch a performance,” says Bernhard. They were inspired by film techniques from avant-garde filmmakers like Bruce Conner and Stan Brakhage. Low says, “We tried on certain pieces to put you in a catatonic state with a jumbled proliferation of images, with only the sound of Caldiero chanting.” They both mentioned that the editing process was full of  “happy mistakes.” It’s right in line with jazz and improvisation, which flows well with what Caldiero does. Caldiero’s performing and writing is influenced by many sources like the theory of jazz and improvisation that are not immediately recognizable, including bard techniques like assonance (cutting of vowel sounds to create rhymes in certain phrases), Dadaism, other anti-art movements and beat poetry. When taking a look into those influences you start to understand some of what Caldiero is doing. The noises and sounds he makes with his voice are part free jazz and part beat poetry. He has melded those elements and has given himself a title that goes with them, “sonosopher.”

Sonosophy is a term of Caldiero’s making that very loosely means sound and poetry. According to Low and Bernhard, they didn’t even have a solid idea what sonosophy meant even a year into the making of the film. According to Bernhard, “Caldiero speaks in very vague terms.  He doesn’t offer the superficial, clear, defined answers you want.”

Throughout the film, Caldiero constantly avoids definition, calling himself anything but “poet,” but contradicts all of this by saying he wouldn’t mind if poet was engraved on his tomb stone. By way of explanation, Low says, “If you are defined, you can easily be categorized and pushed aside like, ‘oh he sounds like Ginsberg,’ but who doesn’t want to be remembered for their life’s work?” Low mentioned a particular class in which Caldiero discussed the Latin root of the word definition, which literally means fence in, so you can trap it. Low attributes that to partly why Caldiero defies definition. Both Bernhard and Low believe that Caldiero is trying to get you to imagine yourself on a primal level, to envision the roots of language. When did a grunt and a hand on a belly turn into “I’m hungry”?  Bernhard also thinks that a lot of what Caldiero is doing is exploration and trying to push his own boundaries, he doesn’t have a clear defined answer for you because, according to Bernhard, “He is a person that is always in mid-stream, so when you ask him what he is doing while still exploring, you get vague answers. This doesn’t mean he doesn’t have a profound understanding of what he’s doing.”

Low and Bernhard are hosting two fundraising screenings to help with the costs of getting the film on the festival circuit. The film will be screened on Sept. 25 at 7 p.m. at the Ragan Theater at Utah Valley University. Tickets for this screening go on sale September 1st at Campus Connection for $5. On October 2, the film will be screened at the Salt Lake Library at 7 p.m. Tickets for this screening will go on sale Sept. 1st at Ken Sanders Rare Books for $5.