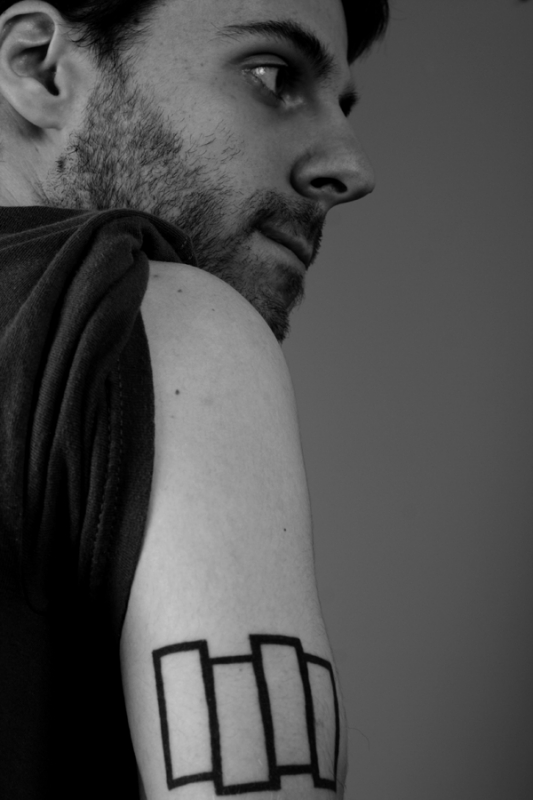 This fall Stewart Dean Ebersole set out on cross-country photo tour.. His mission: to document individuals who have tattooed the infamous Black Flag bars somewhere on their body. The eventual goal: to turn the images of his 30-plus-stop photo tour into a book that will tell the story of a band who fundamentally changed a lot of people’s lives—Ebersole’s included. On Sunday, Nov. 8, Ebersole will stop in Salt Lake City at Nobrow Coffee and Tea to photograph Utahns with the infamous Black Flag bars.

SLUG: Where did the idea for doing the Barred For Life photo tour come from?

Ebersole: About three or four years ago I was sitting in a tattoo shop in Westerville, Ohio called Thrill Vulture. It was raining outside, so business was kind of slow. We were all just sitting around talking when it came to our attention that all four of us had the Black Flag bars tattooed on us, so that became our dialogue for about two hours. About an hour into our conversation, another person walked into the shop and strangely, he had the bars too. He was a cop. It is not like Westerville is much of a Black Flag town, and so it dawned on me that this phenomenon may need to be documented. Last October I set up four shoots in New York using local music promoters and we had about 35 people show up, which made the idea of a national tour a bit more of a reality.

SLUG: When did you get your bars tattooed?

Ebersole: I got them in ‘88. I never saw Black Flag, and in fact I boycotted their live shows as of ‘84 (after My War came out). I was a closed-minded punk kid and I wanted to believe that Black Flag was really selling out. So to make up for my closed-mindedness, I went out and got the bars. In retrospect I think that I was a bit too serious for my own good as a kid. The bars added a level of comedy to my life. After about 10 years, they all bled into one another until I had just one blob of black ink on my ankle. About three years ago, I went back to Thrill Vulture and had Naomi [Fuller] cover up my tiny bars with a huge set of bars that now take up my entire calf. That tattooing was one of our early photoshoots for the book, too.

SLUG: What former members of Black Flag have agreed to be involved in this project?

Ebersole: As of now we have interviewed Dez Cadena and have verbal agreements with Kira Roessler, Keith Morris, Ron Reyes, Chuck Dukowski and Bill Stevenson (sort of). Greg Ginn has not signed on, though SST is helping organize our shoot in Austin, Texas, and Henry Rollins has basically said, “nope, but good luck with the book.” Others, such as Ian MacKaye, Brant Bjork and Barry Henssler (Necros and Big Chief) are signed on. So it is a pretty solid cast of folks helping us.

SLUG: Is there anyone who hasn’t signed on that you would like to get involved?

Ebersole: Principally, I am a documentarian. I want to document it all. Rollins and Ginn, well, their testimony would be amazing but I won’t let their lack of signing on ruin the book. This is a book about a band that changed a lot of people’s lives. As a punk, if I were either of them, I would like to have my say, you know?

SLUG: Why did you feel like this was a story that needed to be told?

Ebersole: There are a lot of people out there with the bars. You know that there was this old statement that punk blurred the boundaries between band and audience. Well, blurring would be overstating it, but punk did confuse the boundaries. This documentary basically lays out the legacy of Black Flag from the eyes of the band and the tattoos of the fans.

SLUG: How has the photo tour been going so far?

Ebersole: So far so good. We are averaging eight subjects per shoot, and they are of all ages, sexes, sexual orientations, and subcultural stereotypes. We have some college professors, some gutter punks and everything in between.

SLUG: Have you noticed a large age range of people rocking the Black Flag bars?

Ebersole: Unfortunately, older people are reticent to come out to the shoots. Whether they are jaded or just think that this is a stupid project remains to be seen. However, if you snooze you lose your chance to relate your experience to the book. I don’t really care who comes out to be photographed, just as long as their hearts are in the right place. I don’t want people running out to get the bars just to be in the book but, well, I don’t want somebody who has the bars on them in stick-n-poke to think that his/her tattoo isn’t worthy either.

Although Ebersole still lacks a publisher for Barred For Life, he hopes to release it sometime next year. At the time of publishing, Ebersole had already hit 20 cities for photo shoots, stopping at record stores, bars, tattoo shops and a handful of private residences. On Sunday, Nov 8, Ebersole will stop in Salt Lake City at Nobrow Coffee and Tea. If you have the infamous Black Flag bars on your body, Ebersole wants to photograph you, regardless of your age, race, gender or the quality of your ink.