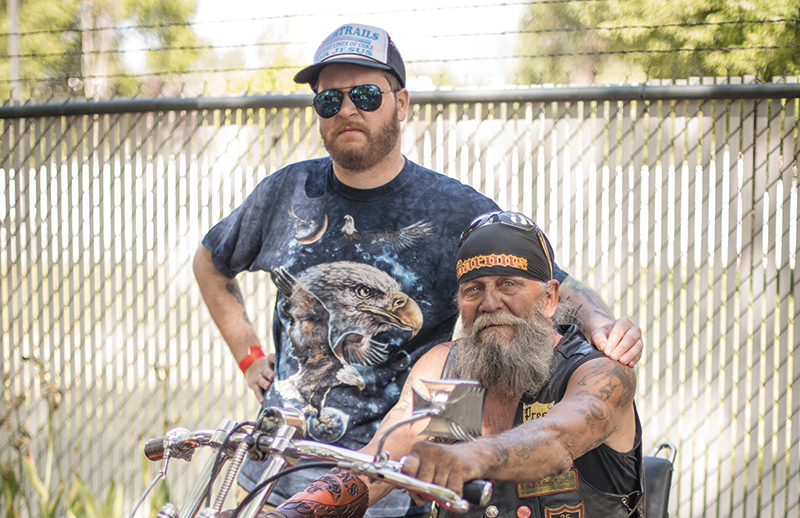 I don’t know shit about motorcycles. A friend of mine just got one and posted the obligatory social media posts of him with his sweet, new hog. A few days later, he tells me that he had been getting messages from girls he didn’t really know, sliding into his DMs saying stuff like “Cool! You ride?” and “Sweet bike! I’d love to ride sometime!” Shit like that. It lead me to believe that maybe guys I know are getting motorcycles just for attention from girls.

But like I said, I don’t know shit about motorcycles—I don’t know how much gas my motorcycle–soft boy theory holds. So I decided that I’d better find out. Whom better to ask than guys who have been riding their whole lives? I was lucky enough to sit down with some dudes from the Barons Motorcycle Club and get the what’s what on the current state of motorcycle culture in SLC and beyond. Chad, who is the Road Captain of the club; Dirt Bag, who is the President; and Teach, a fellow nomad who literally wrote the book on the club, all sat down with me at the Barons’ annual Show and Shine fundraiser for local veterans.

As far as the current state of motorcycles goes, Chad, who is a second-generation Baron, said that there is definitely such a thing as the Instagram Biker. On one hand, Instagram shows off a lot of really amazing bikes and craftsmanship, but you also get a lot of people concerned about their image. Another cultural influence is definitely that soap opera called Sons of Anarchy—or as Teach calls it, Sons of Malarkey. When prepping questions for this interview, I honestly wasn’t going to bring this up, so I’m glad they did. Dirt Bag, who owns a towing company to pay the bills, said that every year in the local gang manual, body shops and towing companies are at the top of the list for being accused of running women and drug fronts, and that in the 40 years he’s been part of the club, the silly TV show has greatly affected the perception of motorcycle clubs—not just with the general public but with the cops as well.

Needless to say, profiling on all levels is a huge problem in our country right now. Unfortunately, bikers are no exception. Teach said that they have been fighting against profiling on a national level for a while. Dirt Bag recently has been working with local legislatures to fight profiling laws. Chad told me about getting pulled over in his car, not rocking any Barons gear, and having the cop ID him as a Baron after he ran his license.

But fighting for rights is nothing new to the Barons. As many people know, they fought hard against helmet laws in the ’70s. I asked them if they would have fought for it as hard if they’d known how many man-buns they’d be seeing on motorcycles these days …

This led Chad to tell me about getting kicked out of a local motorcycle show for being a member of a club. He politely obliged but was sure to remind these kids that if it weren’t for his club, they’d all be forced to wear helmets. Also, he said that everyone would be welcomed at a Barons show—even me, and I still ride a fixed-gear.

Other than fighting the man, Dirt Bag told me that he thought that the current state of motorcycle culture in Salt Lake is in a good place. There will always be antagonists, as there are with everything, but within the last 10 to 15 years, a handful of national clubs have settled here, and everyone is getting along, for the most part. This was obvious at their fundraiser. I counted at least six different cuts and no biker brawls—just a lot of beer, shiny bikes and good times.

I also asked Dirt Bag what advice he would give to anyone who is just getting into motorcycles. Regardless of whether you are a young gun who hates your dad or a dad hitting his midlife crisis, he said that you should take a rider-education course, for sure. It would help you figure out what kind of bike you want, and with so many shitty drivers in Utah, knowing how to handle your shit is not only important but can save your life. Dirt Bag also says no to lane-splitting—Utah drivers are just too stupid.

Overall, Teach, Chad and Dirt Bag all said that they are stoked on motorcycle culture in Salt Lake. It doesn’t matter who you are or what you do—just get out there and ride. For them, that’s what its all about: the journey, not the destination.