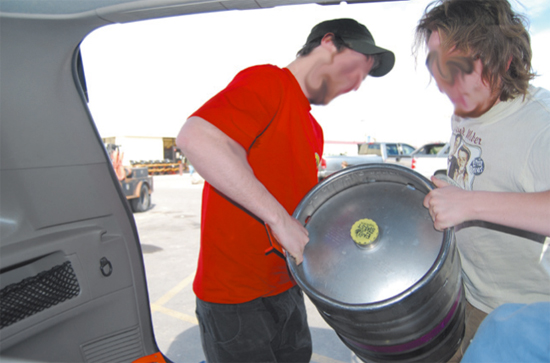 It is damn near impossible to get decent booze in this state. Anyone who has seen the shit storm that this state calls a liquor store knows that we need change. However, Utah is run by modern-day prohibitionists, so its likely that reform is still years away. To deal with this, I’ve been forced into committing the “BPF” run (beer, porn and fireworks). As a veteran of the craft, I felt the need to share the proper techniques in committing this misdemeanor of mayhem that takes place between here and Evanston. The keg run of today is not the same shit seen in SLC Punk. Cops exist these days, and will bust you faster than you can say “keg stand.”

A bootlegger is only as good as their arsenal. These are the items that will save your ass in the long run.

1. Blankets: I generally like to pack home as much booze as possible, and that means my haul is overflowing from the trunk, into the back seat and then into my lap. Never give cops a reason to search your car. Even if they see something that could be a keg, they have no right to search if it is covered up, so cover it up.

2. Cash: Never leave a paper trail when you’re doing something that dances the lines of legality.

3. Keg Shell: An empty keg will save you 40 dollars on a deposit at the liquor store and it makes you look like a pro, eliminating any chance that the 80 pound chain smoker behind the counter will think this is your first go.

4. A Friend: It doesn’t matter if it’s the guy fronting you the cash or the broha just wanting a tap off the keg, you will need someone to help you load your getaway vehicle. Maybe my brain works differently than others, but when I see a vehicle that has a trunk space of  36” X 48” X 28” I can imagine roughly three and a half kegs, four cases of beer and a fat stack of nudies. I tend to go for trunk space over functionality. If that is not your cup of tea, I once knew a dude so bad-ass that he strapped a half-barrel on the back of his hog and rode his ass over the border while laughing. While that’s not recommended, it will promote you to the rank of “beer god” and earn you a free pint if you ever see me. Pick a car that doesn’t look suspicious in any way. Cops love to search for cars that are up to trouble, so avoid white broncos, the General Lee and blood spattered headlights––especially around the heavy drinking holidays like St. Patrick’s, Independance Day and Pioneer Day.

Doing research before your run can make the difference between getting that keg of PBR or winding up with Natty Light. You want to pick the liquor store that will give you the most cover for your op. Avoid liquor stores that are directly off the first exit—it is plainly obvious that you are there for one thing, and it makes you an easy target for cops to spot. As an additional precaution, try to choose a store that is in a crowded shopping district and/or close to a restaurant.

Over the years I’ve noticed that the cops love to watch for the one car which drives across state lines and then immediately back. It’s a clear sign that you are just popping over for some contraband. Do yourself a favor and relax and enjoy a non-Utah experience. Hell, you’ve made it across the border––might as well enjoy some of the local brew. Sud’s Brothers Brewery is located at 1021 Main St. and they always have some killer brews on tap that are worth checking out—the Belgian Black is my favorite.

Now that you have got yourself educated and packed, the last thing you want to do is fuck it up by driving recklessly. Leave the bong at home and your ass in your pants on the drive home. Keep the speed limit and keep your head low.

Nothing makes me laugh more than seeing that weekend party jock that picked up a keg of Bud only to forget a tap. What a fucking tool, right? Do some research on the type of keg you’re picking up, too. European kegs differ from U.S. kegs and I’ve seen more than one person get screwed over by the cashier who has no idea what in the hell they were doing and hooked them up with the wrong tap. If this happens to you, the fine folks over at The Beer Nut are more than willing to save your ass.

Be safe, be calm and never under any circumstances forget a tap.