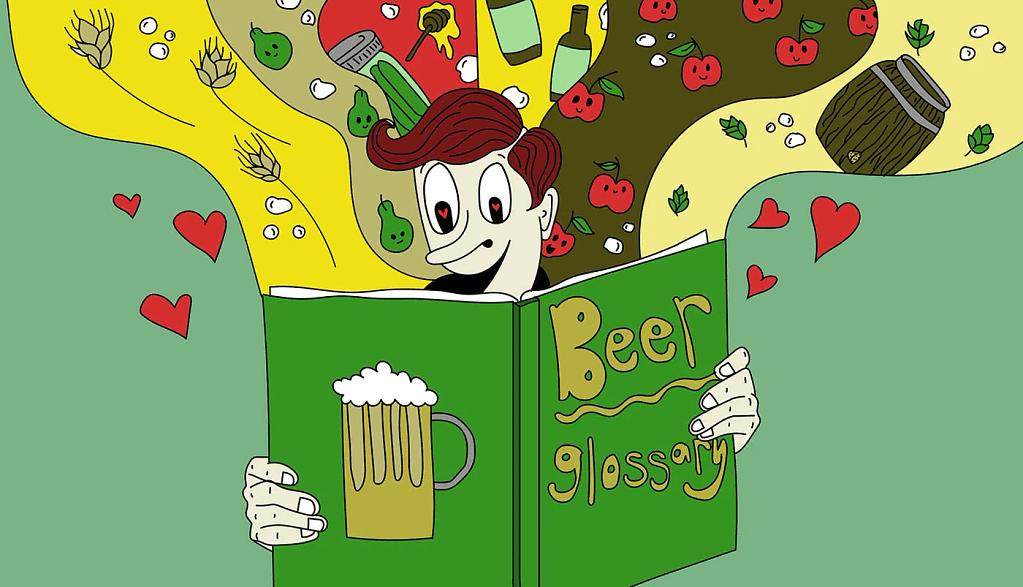 For this year’s Beer Issue, we provide you with a glossary of useful words and phrases to help you sort through the vast world of alcoholic beverages. Illustration: @happyclownscomefromcalifornia

The world of alcoholic beverages is vast and complicated, often involving long strings of arcane terminology. Breweries, wine tastings, cocktail bars or distilleries can assault you with a flurry of language that might seem opaque and confusing. For this year’s Beer Issue, we provide you with a drinker’s glossary of useful words and phrases to help you sort through it all. Without any claim to being an exhaustive list, here are some definitions you may find useful.

Ale – Originally the more general term for non-distilled alcoholic beverages made from grain, this now refers to those fermented with Saccharomyces cerevisiae, the same yeast that makes bread.

Barleywine (Wheatwine) – Not a wine at all but an extra-strong beer style originating in Britain and made as a premium product in some breweries. Adopted by American craft breweries in the 1970s, it spun off into variations like Wheatwine, Oatwine and even Ryewine. Generally, barleywines are big, malt-forward beers with a lot of depth and complexity.

Barrel/Cask – A wooden vessel used for the storage and aging of beverages. Beer, wine and cider can all be fermented or stored in casks, while spirits are aged in them after distillation to mellow the distillate and/or impart flavors from the wood. Commonly made from oak, casks can also be made from other woods, including chestnut, cedar and palo santo; they are generally around 50 gallons in size, but they can either be smaller or much bigger.

Beer – This one’s easy, right? Well, not exactly. Originally only referring to ales made with hops, beer has now become the more general term for any alcoholic beverage primarily made from grain as a source of sugar.

Bock – A German style of strong, dark lager often associated with a goat or ram as a result of a pun in the Bavarian dialect. Its popularity led to diversification into other beer styles—including Weizenbock (wheat bock), Doppelbock (double bock), Helles Bock (pale bock) and more.

Cider – An alcoholic beverage made from fermenting the juice of apples or sometimes their relative fruits (crabapples, pears, quince). It must be at least 51% derived from apple juice to qualify, though other ingredients like sugar, honey or other fruits are common.

Cream Ale – An American beer style that almost disappeared during Prohibition. Despite its name, cream ales have no dairy content. They were originally brewed to compete with European-style lagers along with an easier ale fermentation process. It is popular today in American craft brewing and is usually a light-colored ale with a bit of sweetness, minimal hops and a crisp finish.

Dry Hopping – The practice of adding additional, unboiled hops to a beer either after or during fermentation to allow their alcohol-soluble, aromatic oils to be dissolved in the now-present ethanol. Dry Hopping is common in American craft brewing as a means of getting intense, fruity flavors out of hops but is common in cider-making as well.

Foeder – A large, wooden vessel—similar to a barrel or cask—generally stood upright and tapering slightly upward like a section of a cone. Foeders are often used like a metal tank for the fermentation of wine, beer or cider—especially in the production of traditional, European sour beers. The wood acts as a medium for the microflora that sour a beer to live in and proliferate.

Gluten-Free – Anything made specifically without the use of any product that contains gluten, a protein common to most grains. If any of the ingredients ever had gluten, it cannot be certified by the U.S. government as gluten-free. Almost all wine and cider is considered gluten-free, but truly gluten-free beer has to be made from ingredients without any trace of gluten.

Gluten-Reduced – Products that had ingredients containing gluten but then had an additional enzymatic process performed that denatured the gluten and reduced it to nearly immeasurable amounts. Gluten-reduced products may be acceptable for those with gluten sensitivities.

Gruit – Refers both to an almost-extinct beer style and the mixture of herbs it was brewed with. A throwback to a time when ale was brewed with any number of herbs as seasoning and preservatives beyond hops. Gruit is currently enjoyed by a small resurgence of curious American craft brewers.

Hazy – Reference to a beer’s lack of clarity, as well as shorthand for “Hazy IPA.” A newer beer style famous for its fruit-forward hop flavors, the opacity and haze is actually particulate matter kept in suspension in the liquid to serve as a vehicle for hop flavor. These beers are never filtered or clarified for fear of removing hop flavor.

Hops – The flowers of the Humulus lupulus plant, a member of the Cannabaceae family. Originally among many plants used in the brewing of ales in Europe, hops emerged as the dominant beer seasoning ingredient due to their antiseptic and preservative qualities. Since the development of sanitation technology and understanding of microbiology, the role of hops has largely changed to one of flavoring. The aromatic oils and resins secreted by glands on the flower provide both bitter and fruity flavors and are usually boiled to be infused into beer. Although, “dry hopping,” or adding hops post-fermentation, has become more common in American craft brewing.

India Pale Ale – Originally a British style of beer that derived its name from the practice of brewers increasing hopping rates and alcohol content, this increased the stability of beer for the long ocean voyage to Britain’s Indian colony. Officers garrisoned in India developed a taste for the beer and asked for it upon their return home. Modern IPAs are the result of American craft brewers diversifying the style and exploring new methods of adding hop flavor.

Kettle Sour – A sour beer made from a quick fermentation by lactic acid–producing bacteria in the kettle of the brewhouse, before the boil and addition of yeast. Kettle Sours are most commonly accomplished with strains of Lactobacillus, the same type of bacteria that produces yogurt, sourdough bread and many kinds of pickles. They contrast the traditional, European sour beer styles that can take years to mature.

Lactose – A sugar derived from milk often used in American craft brewing to provide body and sweetness, or a general creaminess to a beer when desired. Notably, all lactose is derived from milk, and beers with this ingredient cannot be considered vegan.

Lager – Derived from the German term for “storage,” it is now a term for beers fermented with the cold-tolerant yeast Saccharomyces pastorianus. It is also a verb for the act of cold-aging these beers. The fermentation at lower temperatures gives this diverse family of beers a cleaner, crisper flavor profile which is extremely popular worldwide. Initially developed in Germany and Bohemia in the early 19th century, lager beer has gone on to replace ale as the dominant style of beer in the world—constituting over 90% of beer brewed today.

Malt – A shelf-stable form of grain made by germinating the seeds to begin the plant’s natural enzymatic process, then using a dry heat to stop those processes. Brewers take advantage of these enzymes in the mash to convert the starches in the grain into sugars fermentable by yeast.

Mash – The first step in the brewing process, where malted grain is ground and mixed with water at a specific temperature designed to activate the amylase enzymes in the grains. These enzymes then fraction the starches in the malt into simpler sugars that are fermentable by brewers’ yeasts.

Mead – An alcoholic beverage made from the fermentation of honey. One of humanity’s oldest forms of alcohol, honey is diluted with water and fermented into a strong beverage, often held sacred in the cultures that made it. It must be made with at least 51% honey to be considered mead.

Perry – A cider-like alcoholic beverage made from 100% pears, often varietals unsuitable for consumption as fruit due to high tannin content or “perry pears.” Perry is rare and disappearing from the world due to the difficulty in growing the necessary pears, although steps are being taken to preserve this unique heritage.

Wet Hopped – Referring to hops being added to the brewing process fresh from the vine, often within 24–48 hours of harvest. It contrasts the majority of hops, which are dried, compressed, packaged and frozen immediately after harvest for preservation purposes.

Wild Yeast – A catch-all term for any diverse group of yeasts that are considered non-domesticated. Often referring to yeast that was naturally present as opposed to being specifically added by the beverage maker. These yeasts are often accompanied by other microflora like bacteria, and the resulting “wild” fermentation is generally seen as beyond the beverage maker’s control. The results can be similar to traditional fermentations or vary substantially and often include more acid production, resulting in a more tart or sour beverage.

Yeast – A family of single-celled fungi that ferments simple sugars into ethanol, the source of all alcohol in alcoholic beverages. Yeast is widely present in the environment and has been used by humanity for food and beverage production for thousands of years.