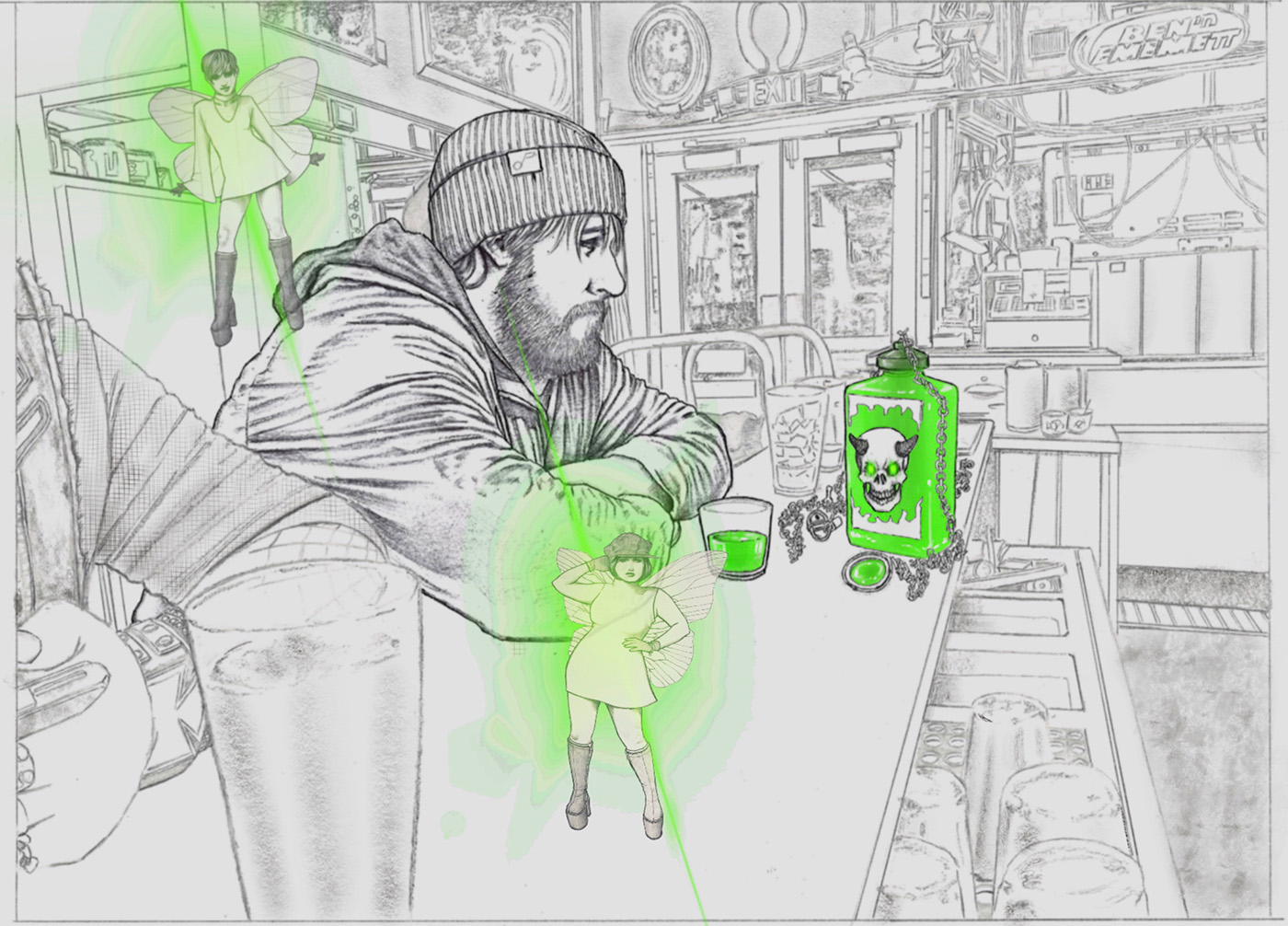 For the Spirits Issue, my SLUG Editor asked me what my favorite liquor was—like, if I had a choice of anything, what would it be?

If there were such a thing as a utopian existence where money didn’t matter, hangovers didn’t happen and alcoholic spirits flowed freely throughout a tranquil valley directly down your throat akin to Big Rock Candy Mountain, which would you choose? On a normal day in my shitty life, I reach for the nearest shot of whiskey and yellow beer. But if I had my choice in such a fantasy land, I’d chose the Flaming Green Fairy, better known as absinthe.

For those of you unfamiliar with this particular distilled demon, I’ll give you a brief breakdown. Absinthe is a relatively new spirit developed in Switzerland in the late 19th century. And much like Swiss watches and Army Knives, Swiss craftsmanship in the art of fucked-up-ness is on full display in this liquor.

“If I had my choice in such a fantasy land, I’d chose the Flaming Green Fairy, better known as absinthe.”

Absinthe is green—so it looks cool—is usually a super high proof and has almost a black-licorice aftertaste. Locally, it’s a popular ingredient in cocktails (such as a Sazerac) as opposed to being enjoyed on its own—I’m guessing mainly due to its strength. When enjoyed alone as the primary ingredient, it’s most popularly served with a sugar cube and distilled with water. Drinking straight absinthe might burn a hole in your stomach, but I like it when my stomach feels warm and fuzzy.

Absinthe is mainly a botanical concoction akin to a high-end gin, with one of the main herbal ingredients sounding like it could be the name of a black metal band—wormwood. It has been suggested that wormwood has psychedelic properties, although that’s highly debatable. I’ve drank absinthe many times with the intent of tripping out, and my personal experience has been, sadly, no hallucinations—not even a tracer. But there is definitely more of a body relaxation that accompanies an absinthe binge, like getting ripped off of high-end wine.

Regardless, lots of cool people have been known absinthe-holics over the years.  Some famous ones throughout the early 20th century include Earnest Hemingway, Pablo Picasso and Vincent Van Gogh—those are some pretty cool dudes. Hemingway used to drink his absinthe with champagne and called it “Death in the Afternoon”—that’s rad.

“Absinthe is green—so it looks cool—is usually a super high proof and has almost a black-licorice aftertaste.”

Another cool thing about absinthe is that it was banned in the US for most of the 20th century. That’s one major signal that it’s cool. Much like John Travolta, absinthe made a massive comeback in the 1990s. Supposedly, the absinthe distributed in America is nothing compared to the real stuff you can get in Europe. So when I was in Prague a few years back where there are bodegas dedicated to the sweet green stuff, I was ready to get weird. I spent a night in the Czech Republic drinking as much absinthe as my liver would let me. Still no hallucinations, and yes it was delicious, but a Bohemian hangover of epic proportions ensued the next day.

The next time I got to drink some real absinthe was a night where I found myself in a bikers club/bar. I cannot say which one or how I got there—you have to follow the rules of the establishment when in such environments.You’ll get your hand smashed if you pull out your cell phone in there, and understandably so. I was sitting down next to a friendly biker who pulled out a bottle of the real stuff—smuggled or bootlegged I cared not. He kindly poured me a couple shots and I let the magic of the absinthe take its course.

I recommend the next time you’re at your favorite nicer, shitty bar, order a shot of absinthe with 2 ice-cubes and no sugar. Thats how I like it, as should you.