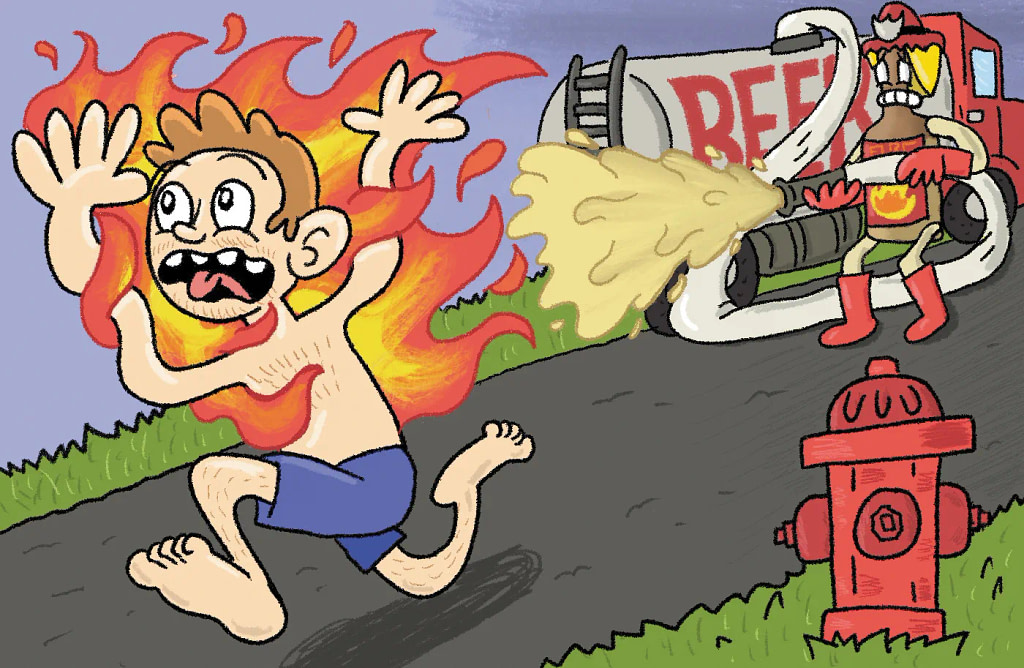 Mike Brown: Beer is Here to Save the Day

A wise philosopher named Homer—Simpson, that is—once  said, “Ah, beer. The cause of and the solution to all of life’s problems.” Poignant and wise, indeed. Beer turns the timid into the brave and turns bad ideas into great ideas—among other things. For this annual Local Beer Issue, I’d like to turn my attention to how beer can solve our problems.

Before I do this, I must make it very, VERY clear that beer, although priceless, is not … I repeat, IS NOT a currency. Using beer as a currency is illegal and we here at SLUG would never, ever, promote illegal behavior or social disruption in any sort of way. The last thing I would ever want to do is disrespect the great and wonderful people at the DABC and Utah State Legislature who have specifically reminded me that beer is NOT a currency, and if there are any government institutions I have full respect and admiration for and realize they always have our best interests in mind, it is our State Legislature and DABC.

“Stella, although not the fanciest of beers, is perceived as a nice beer and has gotten me out of a pickle or two in my drinking career.”

This leads me to my first point on how beer has saved us. The Legislature has recently deemed that some seltzer beers are in fact NOT beers and are therefore not to be sold in grocery stores. I personally think this is tremendous news! Instead of wasting time deciding how to fix the shrinking Great Salt Lake (it’s gonna evaporate anyway, big whoop), they focused on more important stuff like proving my point forever—seltzer beer is not beer and is fucking gross. No law when there’s White Claw? Think again, you freshmen sorority pledge. Learn to do a keg stand like a real collage grad. Beer wins this round, and I couldn’t be prouder of beer.

Now, one reason why I don’t really like craft beers, IPAs or fancy beers in general is simply because I tend to drink beer too fucking fast. I realize that this conundrum is mostly on me, but there is a time and a place for a fancy beer. Stella, although not the fanciest of beers, is perceived as a nice beer and has gotten me out of a pickle or two in my drinking career.

Basically, if you ever find yourself in a bar and, for whatever reason, someone becomes volatile toward you, buy them a Stella. I don’t know what it is—maybe the soothing green color of the bottle or the elegant name, Stella—but for whatever reason, this beer will calm a person down. We all know alcohol can make many people sad and angry, and not all those people are your step-dad.

“You can also wash your hair with beer and use it as an alternative to moisturizing cream. Did you know that? Probably not, because you are likely not as smart as me. But yes, this actually works.”

Although there are just a few teeny, tiny harmful side effects to your health, there are probably way more health benefits. I am not a doctor, but you should take my medical advice because I am frequently on the internet doing my own research. So, just trust me. Anyway, did you know that beer is a diarrhetic? That means if your poop won’t plop, you can shotgun a beer and skip the laxative. It seriously works—my bowels have been regular ever since I’ve been of legal drinking age.

You can also wash your hair with beer and use it as an alternative to moisturizing cream. Did you know that? Probably not, because you are likely not as smart as me. But yes, this actually works. If you don’t believe me, put down this magazine right now, go grab a six pack and try it, wherever you are. If someone asks what you are doing or why you always smell like a step-dad, you can just tell them you are being hygienic.

That’s all for now. For more helpful tips on how beer can solve your problems, just buy me one, or 12, the next time you see me.