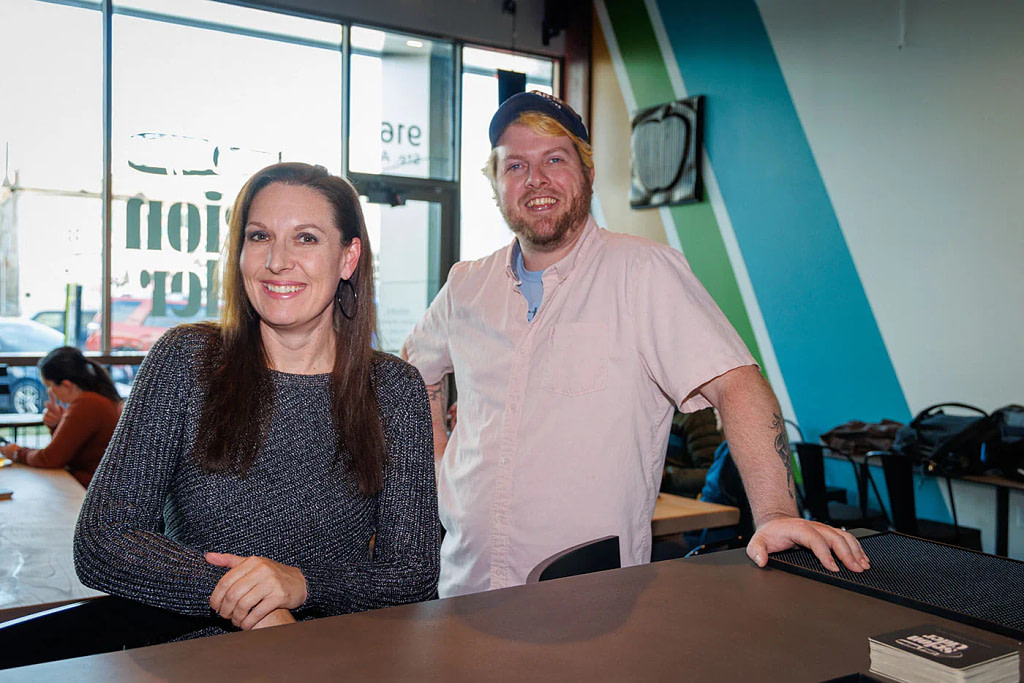 Scion Cider: Bringing Education and Cider to All

Outside of the traditional categories of alcohol—beer, wine and spirits—exists a drink that overlaps all three—cider. New local cider bar Scion Cider focuses on bringing cider education to the public eye. “We want to teach people about apples, how they grow, how cider is made, as well as the traditions and the history. We really want people to engage with that,” says Owner Rio Connelly. On top of the education, the bar’s belief is that cider is for everyone, no matter what your taste buds prefer.

From selling supplies at The Beer Nut to becoming Kevin Crompton’s right-hand brew man at Epic Brewing and co-founding Proper Brewing with his brother, Connelly has been a long-time leader in Utah’s beer scene. “What I love about the [craft brewing] industry in Salt Lake is that people are super supportive because we all kinda feel like we have the responsibility to keep this industry alive in a state that isn’t always supportive of it,” says Connelly. Stepping away from beer, Connelly teamed up with business partner Elisabeth Osmeloski to pursue the world of cider. “I met Elisabeth through a mutual friend of ours … Steve Rosenberg, current owner and operator of Liberty Heights Fresh. Rosenberg had to go gluten-free a handful of years ago and therefore couldn’t drink my beer anymore and was very upset,” says Connelly. “I left Proper in late 2019 and Steve introduced me to Elisabeth, who already had a foothold in the Utah cider scene. We started spitballing ideas at that point, and it was clear that we wanted to do something like this.”

“What I love about the [craft brewing] industry in Salt Lake is that people are super supportive.”

Located at 916 Jefferson Street W., Connelly and Osmeloski found themselves in the heart of Salt Lake’s Central 9th neighborhood. “We have fantastic neighbors, and it’s a really cool area that’s definitely up and coming. We’re only going to get cooler and cooler from here on out,” Connelly says. Surrounded by a balance of local bars and food joints, Scion Cider keeps their food menu on the small side, featuring Spanish- and Mediterranean-influenced bar snacks—Espinaler organic potato chips, Marcona sea salt and olive oil almonds, charcuteries with various meats and cheeses and a rotating sample of conservas (tinned fish).

An estimate from Connelly claims somewhere around 150 different ciders presently in the bar. “Our goal is 200,” he says. “We have 25 taps, 22 of which feature cider, as well as two beers and one wine on tap. The remaining 130 are all in cans or bottles ranging from states all around the country and countries all around the world.” Connelly has plans to begin brewing his own cider, hopefully putting the first batch in brewing tanks by April for a release date around June 2022.

“For me, it’s the diversity in the cider. It’s about showing off the character of the apple.”

After trying hundreds of these ciders, both Connelly and Osmeloski have found a few favorites. For Osmeloski, the Eden Imperial 11 Degree Rosé is a staple. “It’s such an easy entry into cider, especially for people who don’t think they will like cider. It has little hints of sweetness, and it hits close to home because it is from Vermont and I’m from New England,” she says. Connelly prefers the tartness of Clear Fork’s Dolgo Sour, made from the Russian Imperial Dolgo crabapple and aged five months in stainless steel to create a slightly sweet and distinctly tart flavor for the bold cider drinkers. “For me, it’s the diversity in the cider. It’s about showing off the character of the apple, revealing the Terroir and influence of the uniqueness of apples,” Connelly says.

Although Scion Cider Bar is still in its “terrible twos” stage, it stands clear that this cider house rules! Scion Cider is built from the heart and soul of Salt Lake City’s inclusive community. Find more information at scionciderbar.com or on their Instagram @scionciderbar.

Read more about the beer and cider scene in SLC:
Mountain West Cider: Complementing, Not Competing
Give a Hoot, Buy Local