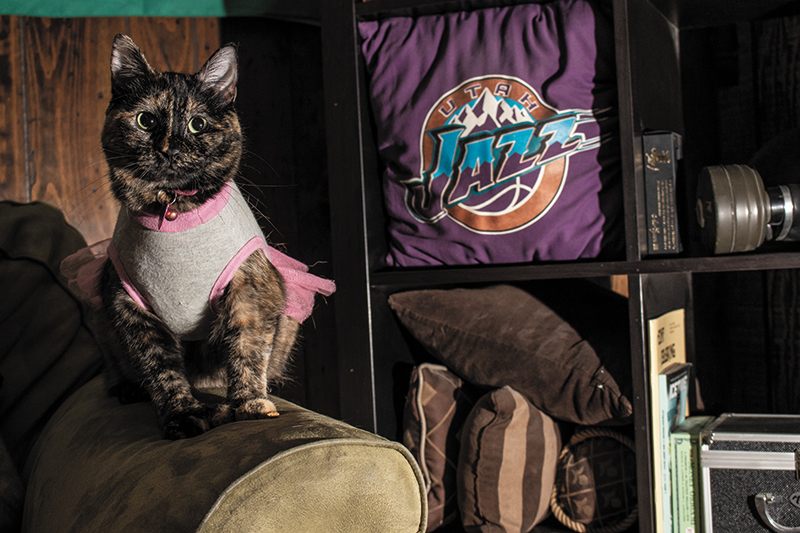 Behold: For this SLUG Mag Local Photography Issue, I bestow upon you Princess Ramona, Lordess of Rose Park, heir to the throne of Salt Lake County and ruler of all things pink. Because that’s her favorite color. She’s very particular—as are most cats. For some reason, all her favorite toys are pink.

I acquired Princess Ramona in a peculiar way. When my last cat, Jet Pack, made the journey to the giant litter box in the sky, numerous friends and confidants tried to basically pawn a cat off on me, thinking it would ease the grieving process—as if my feline companion was akin to a broken TV, “Just get a new one.” Well, I bury my feelings like cats bury their poo, so it just doesn’t work that way.

After about a year of living a meow-less life, my close friend Josh Rudy, who is also a repo man (reference my “Repo Ride-Along!” article) found a box of kittens while he was repo-ing a car from a lady with a credit score surprisingly lower than mine. Josh asked the lady if he could take the box of kittens with him that she was neglecting as much as she was neglecting her car payments. And she said no, that all the kittens were spoken for.

Josh made the executive decision to grab the cutest cat in the litter, aka Princess Ramona, along with the lady’s shitty car. He literally repo-ed me a cat. On his way back to the tow-truck yard, Josh called me and stopped by to let me know he had my next cat. I told him about the numerous attempts from previous well-wishers about pawning a cat off on me.

But there was something about Princess Ramona I just couldn’t say no to.

First off, she was tiny as shit, and being small always makes animals way cuter. Even ugly alligators. She was seriously like three weeks old at the most. Then Josh pointed out her mutant paws. This little princess had 13 front toes. I had never seen a cat with extra toes before, so I quickly Wikipedia-ed how the fuck that’s even possible.

It turns out that extra toes in kittens is very possible, though not super-duper common. They are called polydactyls. Ernest Hemingway was obsessed with such felines. Sailors used to believe that polydactyl-extra-toed cats were good luck and could catch mice on ships better and climb up ropes faster with their extra toes. I believe this to all be superstition, but regardless, Hemingway received a polydactyl cat from a sailor as a gift once and liked it so much that he left his entire estate in the Florida Keys to a bunch of mutant-toed kitties that still rule the place to this day. Thank you, Wikipedia, for making me sound kind of smart.

But after owning a polydactyl kitty, I have to disagree with the sailor about them catching mice or being more agile. Princess Ramona is clumsier than a drunken sailor on New Year’s Eve. She makes up for it by being cute as fuck, but seriously, she couldn’t catch a dead mouse in a mousetrap. It would be like if we had to wear baseball mitts on both hands for the rest of our lives.

As Princess Ramona got older, I realized how dumb she is. Before you go all social justice warrior on me about my cat, please let me explain. My cat is dumb as fuck. And I love her for it. She clomps around the house with her mutant paws, and it’s adorable. She plays with her kitten toys with the grace of a methed-out ballerina. I can’t trust her to go outside because I don’t think she could climb a tree if her life depended on it. But like I said, and as you can see in this picture, what she lacks in nominal cat coordination and agility, she makes up for in cuteness—the biggest thing Princess Ramona has going on for her. She’s not very cuddly, likes to try to eat my dinner and seems to get off on being annoying. But she also doesn’t barf or jump on my face in the middle of the night, and she fights with my roommate’s dog in a hilarious fashion.

And that’s just how cats are. I don’t think that there is such a thing as a perfect cat, and that’s the beauty of the fuzzy, little beasts. For as much as I loved Jet Pack, he still puked a ton and got into street fights and racked up vet bills. Princess Ramona shall never see the front lawn unless she is on her leash. And I got her a leash and harness to walk around outside, but cats don’t really go on walks. You basically end up dragging them away from dead birds and feel kind of bad about it.