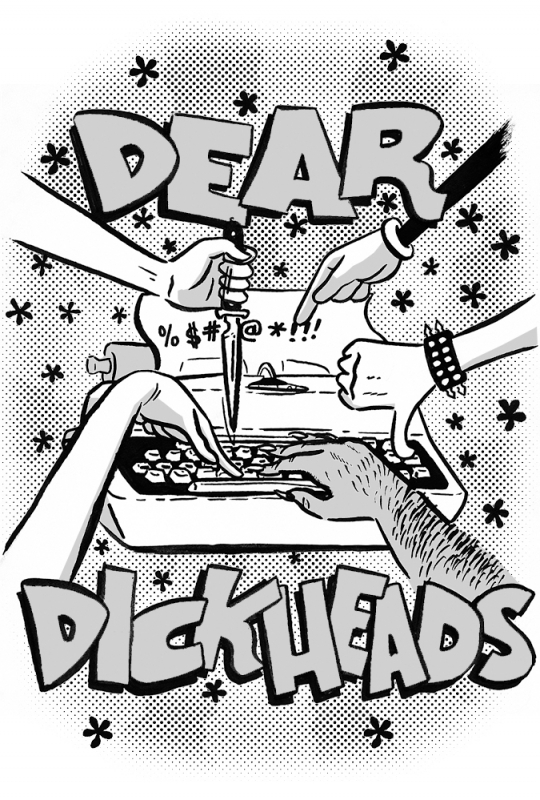 LETTER TO THE COMMISSIONER OF THE CHUMP POLICE ( a response to last month’s letter from Dave Amador):

Sweet letter, I’ve been wondering how long it would take for somebody to write in. Your letter put the first smile on my face in a long time. Unfortunately I didn’t get fired from SLUG. I have been trying my hardest to for several years now. Oh wait, I didn’t ever get hired. I do this shit for free because I like to piss people off, like you. Thanks for the Rush Limbaugh comparison. For your information Rush is a conservative, fat white person, just like your Dad and probably your mother as well. I am 5’2” Hispanic, new-leftist and Anti-Christ (Hispanoleon) who weighs 145 pounds. As far as wanting to be a pro skater: no thanks, I never had that in mind. I like taking showers and changing my clothes daily. I’m not into sleeping on other peoples couches, getting paid as much as a fast food employee, or traveling the world and seeing nothing it has to offer but a ledge, some stairs and maybe a cool tranny spot. I wouldn’t mind all the free boards, wheels, trucks and clothes. Oh yeah, got that part covered.

As far as my love for the kids (A.K.A. little shits), I love all the kids at the park even the ones I can’t avoid due to my lack of skill. Commissioner if you ever did a trick going faster than a snail’s pace you would see where I was coming from. By the way, I was a skate camp counselor for several years giving back to the youth and believe me I gave them a piece of my mind as well. I’ve also been pleased to see some of the kids I mentored turn into awesome skateboarders and many of them surpass my level of talent. As far as the kids go who gave up on skating and moved onto something else, good on ya mate. Commissioner remember that when you’re the old age of 33 like myself, skateboarding will just be another one of the fads you got in and out of.

I do however have a problem with painkillers and other prescription drugs. My problem is that I can’t get enough of them. So anybody that’s reading this who has some please e-mail me immediately because I’m trying to get rid of these shakes. Maybe the Commissioner can get me some from his mom’s medicine cabinet. By the way, you forgot about my addiction to alcohol and cocaine. As far as killing myself just remember if I go I’m taking you with me. I not only have a gun but my gun has kids as well.

On a positive side you are a great writer just like the mom’s who write into THRASHER canceling their kids subscriptions because of the harsh content. You probably kill it skating for sure. It’s too bad you’re a fucking coward who can’t sign his real name.  Instead you compare yourself to the police, who are skateboarders’ best friends. Maybe you found your true calling in life. You obviously know who I am so when you see me at the park, come say “Hi” then we’ll see who gets put in their place you fuckin’ muark.

Always doing it for the old, stale and negative.

I’m all for musicians packing clubs based on their past glory.

That is what happens.  People buy tickets for Ozzy because they know he’ll play Black Sabbath songs, and on a smaller scale, people go see Tim Barry because they know he was a member of Avail.  These guys have earned the right to play to a packed crowd.  This makes perfect sense to me.  Where I draw the line, though, is when the promoter leverages this type of stardom in completely dickish ways.  Case in point: in the advertising for a recent gig with Mike Watt and the Missing Men the club wrongly listed his band as the Minutemen.  Now sure, Watt did play bass for the Minutemen, and including this info in the advertising is a perfectly sound way to get fans into the club, but pretending that drummer George Hurley and the band’s long dead front man D. Boon would once again take the stage, and in SLC of all places, shows a level of purposeful assholery that we really should put an end to.  Fuckers. —Woodcock Johnson

You’ve got a point, even though your parents named you after a pecker. Or maybe a woodpecker.