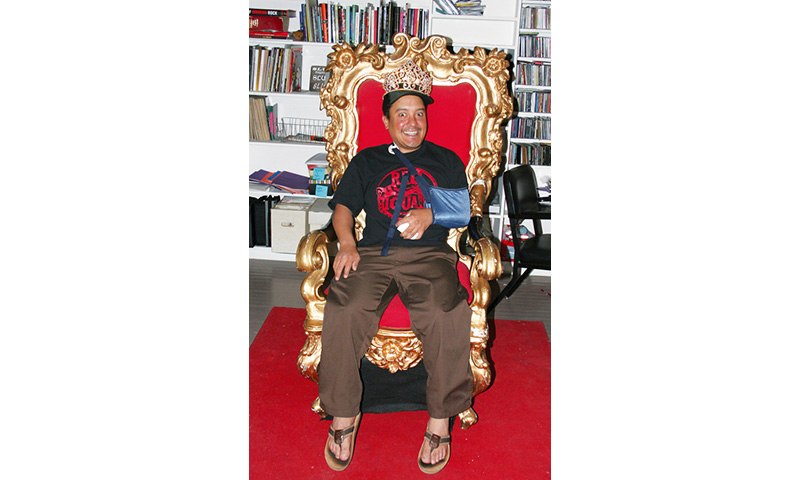 Amadorable (I have to give Sam Hubble credit for this name) was my best buddy ever.  When Angela gave me the opportunity to write about him I thought of the last conversation I had with Dave.  He told me how he wrote a letter to Dear Dickheads and how Angela had busted him because he sent it from his email.  Then he told me of how he had wanted to write movie reviews for SLUG and I thought how appropriate.  Dave was an amazing writer and watched every movie that came out, I accompanied him many times with a bag full of snacks that would take up an entire seat in between us.  And when telling Angela that this is what he wanted to do she responded with, “Dave, we have deadlines!” And now this is my dilemma, damn deadlines!   My friend was the most passionate person that I knew and was not afraid to call anyone out or jump up to slap anyone in the face. To tell one adventure spent with Dave would be unfair to so many equally amazing good times. He taught me how to LOVE skateboarding and to express your individuality at whatever cost. I thought I was the best at partying, but I was just keeping up. He believed in all of his friend’s talents and pushed them to reach their full potential. He was their biggest cheerleader when he saw them succeed.

I am so grateful for the memories that we all have with him. His friendship has made me a better person and left a huge impression on my heart. I thought we would be together for many more years of shenanigans and good times and I can’t believe our collection of memories has come to an abrupt end. I feel like Tinkerbell with her Lost Boys missing our Peter Pan. His spirit and passion is going to fuel the talent of Salt Lake City so ya’ll best watch out! Forever in my heart rest in peace my brother from another mother, Dave Amador, I’m going to miss the hell out of you!

With so much love,
Your  A-Team Members,  Heidi & Kathy

————————————————————————
Amadorable.. Mi Amoradore..
I am so crushed for everyone who is feeling this loss. This is one of the biggest hearts I’ve ever met! He cared so deeply for his friends and family and was so fun and funny … always made me laugh. Such a crazy little dude … taught my son how to jump in front of moving trains! Not a good idea—but that was Dave. I’m going to miss our nice dinner and movie nights and long talks. I know he wouldn’t want anyone to be this bummed, but this is a really hard loss … — Roxan Morin

Everyone always had their own nickname for Dave Amador. At SLUG, Amador made up his own when he chose to write under the pseudonym of Peter Panhandler back in 2005. He’d handwrite a rough draft on yellow lined paper, bring it in and read it to me aloud. I always loved these readings—he’d stop and laugh at his own jokes or ask “Is it okay if I write that?” Amador was always straight up in his writing—telling-off respected skateboarders in the community, talking shit on Thrasher and Transworld and  bitching about the skate park scene … or about anyone else he felt needed a taste of humble pie. But Amador didn’t just gripe, he wrote encouraging words about up-and-coming skate rats, hiding inside jokes and wit in every sentence. He loved and hated the SLC skate scene (but mostly loved it) and soon he was unafraid of what any parent or shop owner thought of his truth. One day he walked into the SLUG HQ and proclaimed, “I’m not Peter Panhandler anymore, I’m Dave Amador.” His byline may have changed but his writing style never did, no matter how many Dear Dickhead letters we received.

Amador was a courageous writer, an encouraging voice— cheering-on skaters from contest sidelines … and an advocate for all of his friends. Our community has lost a truly beautiful soul.

Thank you, Amador, for the jokes, shenanigans and love you shared with us here at SLUG. We fucking miss you.
—Angela H. Brown