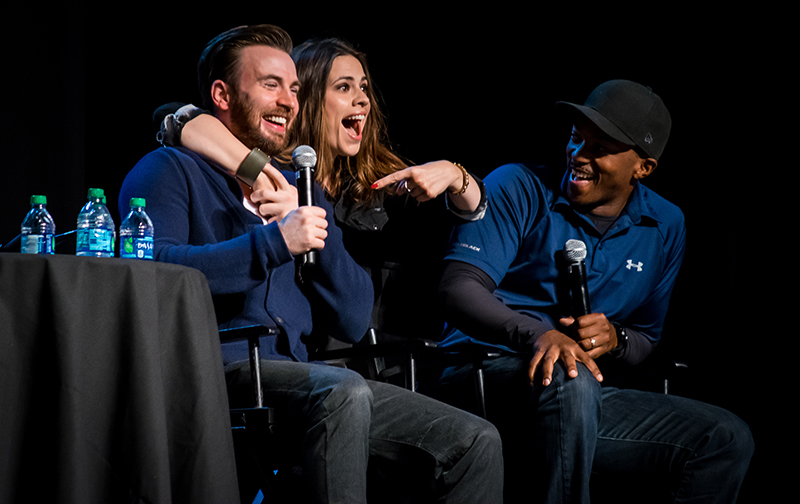 The only sad thing about the Chris Evans panel was that it was only 20 minutes long—but if you factor in the whole squee-inducing presence of Captain America, it was still amazing. He came out and sat on that sweet motorcycle for pictures, then he was all ours. He was so goddamn nice! When he sat down, he talked about people coming up to him, afraid to ask for a hug—he was totally cool with it. “Hug away!” he said and he meant it. I hugged him in my photo op with him and it was worth every penny.

Jay Whittaker was the moderator on the panel and he nailed it. He kept the conversation going and he made Evans laugh. While Evans can’t really talk about Civil War, he does admit that from what he’s seen, he thinks it’s the best one. Cue a huge roar from the crowd, because that’s exactly what we want to hear. Chris Evans talked about fry sauce (which made me, personally so happy) and his next role that didn’t involve the gym—Gifted. He’s going to be a philosophy teacher so it’s break time for the pecs, which is sad news for the ladies out there.

He answered a few questions about his anxiety, and how he manages it. Chris Evans recommends practicing calming that brain noise that can envelop you every day when you’re anxious. Then the inevitable question popped up of who he liked playing better: Johnny Storm or Captain America. He was more of an idiot and didn’t know any better when he was Storm, and he was just a big ball of worry for Cap, but he feels like he couldn’t have touched as many lives as Johnny, so Cap is the winner. Duh!

Chris Evans only got through a few questions before Anthony Mackie appeared from backstage and crashed the party. A few minutes after he popped up, Hayley Atwell joined the party with her lovely British accent and beautiful presence. Sadly, right after Atwell sat down, Evans finished his question and then was taken away, taking Atwell with him. She said hello, hugged everyone, sat through one question, and was gone. It was disappointing, she seems so awesome and we didn’t hear anything from her.

Mackie stuck around though and the rest of the hour we had with him was full of laughs—he’s so great. He talked about his work with vets, similar to Mackie’s character in Winter Soldier, and about PTSD. He said that the best thing we can do is sit and listen with those who suffer from it. Then Whittaker brought up a touchy subject—was it worse getting served by Eminem or getting beaten by Ant-Man. Mackie says it was worse with Eminem because he landed way more punches on Ant-Man and technically won that fight. He got hilariously defensive about that and it was great.

The best part of the panel is when Whittaker challenged Mackie to a push-up challenge. Mackie kicked his ass, but Whittaker still had the biggest smile on his face. It was so great to watch them duke it out. Mackie also beat everyone on set at pushups, including Chris Evans. His panel made the disappointment from the lack of Cap disappear. Sure, everyone wanted to see more Evans, but Mackie’s stage presence more than filled his shoes.