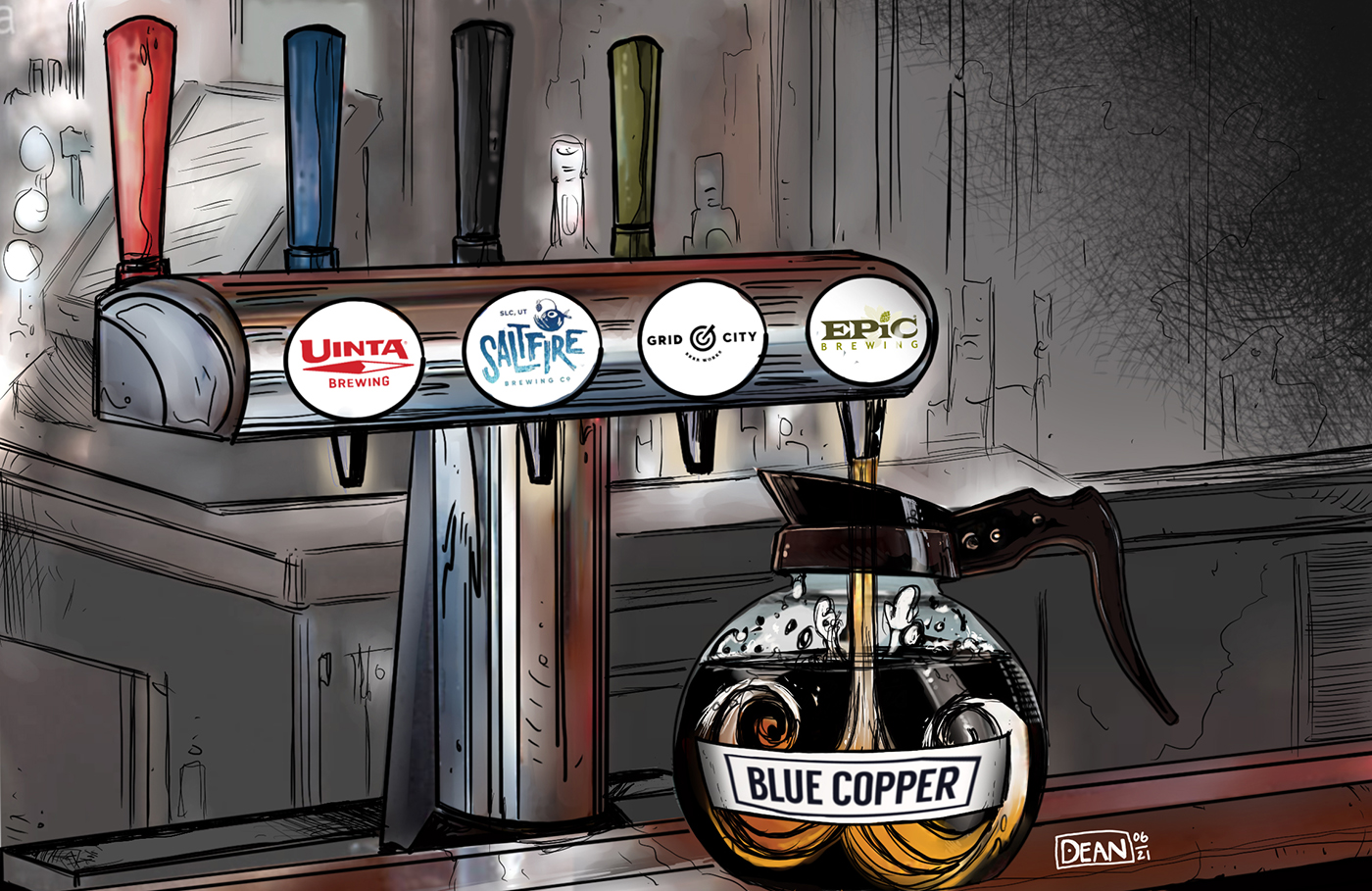 Coffee Beer: It’s All About Balance

There’s two things in this world I (possibly) love more than music: beer and coffee. Put the two together, and you have a match made in heaven! Although, some coffee connoisseurs say that adding coffee to beer is sacrilegious—why mess with perfection! Patrick Andrews of Blue Copper Coffee speaks otherwise, “My stance is that both coffee and beer are nuanced beverages, and I see no reason not to carefully and intentionally combine them. Much like you might select one hop over another to nail certain characteristics in a beer, you can select a coffee with flavor notes that play well with the rest of the beer.” Blue Copper Coffee has given locally sourced coffee beans to a handful of breweries, including Uinta Brewing, Grid City Beer Works, Epic Brewing and SaltFire Brewing. As Andrews remarks, “Local sourcing cultivates community, builds collaboration between brands and in our case, gets coffee people stoked on beer and beer people stoked on coffee.”

“My stance is that both coffee and beer are nuanced beverages, and I see no reason not to carefully and intentionally combine them.”

The process of adding coffee to a brew can be a complex concoction, though these breweries share a few of the same traits to their infusions. SaltFire keeps it simple, adding the beans post-fermentation and steeping for 24–48 hours or until the flavor is where they want it. “We use Blue Copper beans, but other than that, we don’t use coffee in any unusual or novel ways—just straightforward over here,” Head Brewer Mike Dymowski says. Leonard Gath of Uinta stirs a bit more in their pot. “For our latest coffee beer release, Ghosts of Sego, we chose to add whole beans directly into the whiskey barrels where the base beer was resting. We worked closely with Blue Copper to make sure we had the beans roasted a few days before we wanted to add them to ensure we were getting the clean, bright flavors we wanted,” Gath says.

“We worked closely with Blue Copper to make sure we had the beans roasted a few days before we wanted to add them to ensure we were getting the clean, bright flavors we wanted.”

There’s the importance of texture and technique, too. At Grid City, brewer Jeremy Gross says,  “Our Vanilla Coffee Cream Ale is cold brew–infused with roasted Tanzania coffee. I cold brew infuse to keep the natural oils and flavors intact and it creates a smoother flavor. Then, it’s served through our nitro system, which creates a rich, creamy, dense foam and smooth texture.” Oof, I’m in love. Likewise, fermentation is a crucial aspect of brewing a coffee beer. Epic brewer Gus Erickson says, “The magic happens in the fermenter, which is toward the end of the brewing process and on the cold side of the brewing process. We add coffee beans to the beer once it reaches the fermentation tank. Here, the beer and coffee beans commingle for a while. As Wes, one of our brewers, puts it, ‘It’s actually a lot like cold press coffee.’”

The best part about coffee beers is the fact that you can add coffee into almost any style of beer. Gath’s preferred style is stouts and porters: “[They] play really well with coffee. But for this project, we wanted to use a base that didn’t have any resemblance to coffee to see how well we could make the different flavors play together,” Gath says. “It’s fun to find styles that you don’t traditionally associate with coffee and try to make something work.” On the contrary, Andrews mentions that light-to-medium roasts of coffee pair best with beer. “Some beers, such as stouts, need a little more caramelized and roasty flavor in the coffee to stand out. I’d roast a coffee a smidge darker to build those flavors and make sure it isn’t totally washed out by the flavors of barrel, chocolate, vanilla, etc,” Andrews says.  “We’ve had great success doing lighter roasts with bright floral coffees in lighter beers like cream ales and pilsners. Super, super dark roasts always end up tasting acrid and kind of vegetal, which ain’t my vibe.”

Speaking of flavor, I always tend to find that most coffee beers have a tremendous amount of sweetness, and Erickson points out that this sweetness comes from the malt bill. Gath elaborates and says, “Coffee beans can often add a bit of acidity or astringency to the base beer, so by building that base with a little additional sweetness you can end up with a final product perfectly set in the middle.” Gross also prefers the sweet side of coffee beer, saying, “Our beer is infused with whole vanilla beans and a touch of organic date syrup. It’s got a pleasant sweetness that balances out the bitterness in the coffee.” As for SaltFire, they keep it cool, calm and collected with their Dirty Chai Stout: “[It’s] always dark and semi-sweet,” Dymowski says.

“It’s fun to find styles that you don’t traditionally associate with coffee and try to make something work.”

Yes, I’m sure some folks will think otherwise about coffee and beer going together, but hey, that’s why hard seltzers and sours exist! Erickson says, “Ingredients aside, there’s just a special feeling we get brewing coffee beans into an alcoholic beverage just nine blocks away from the temple. Two wrongs make a right, right?” Right. This, of course, all wraps back to the importance of community and collaborating. “It’s a cool thing for two sides of the beverage industry to work together and be excited about each others’ process,” Andrews says. “Selfishly, it challenges my knowledge of the roasting process to find coffee that works well in a specific beer recipe, and it’s super exciting to see our logo on cans and bottles from breweries we love.” Cheers to community!