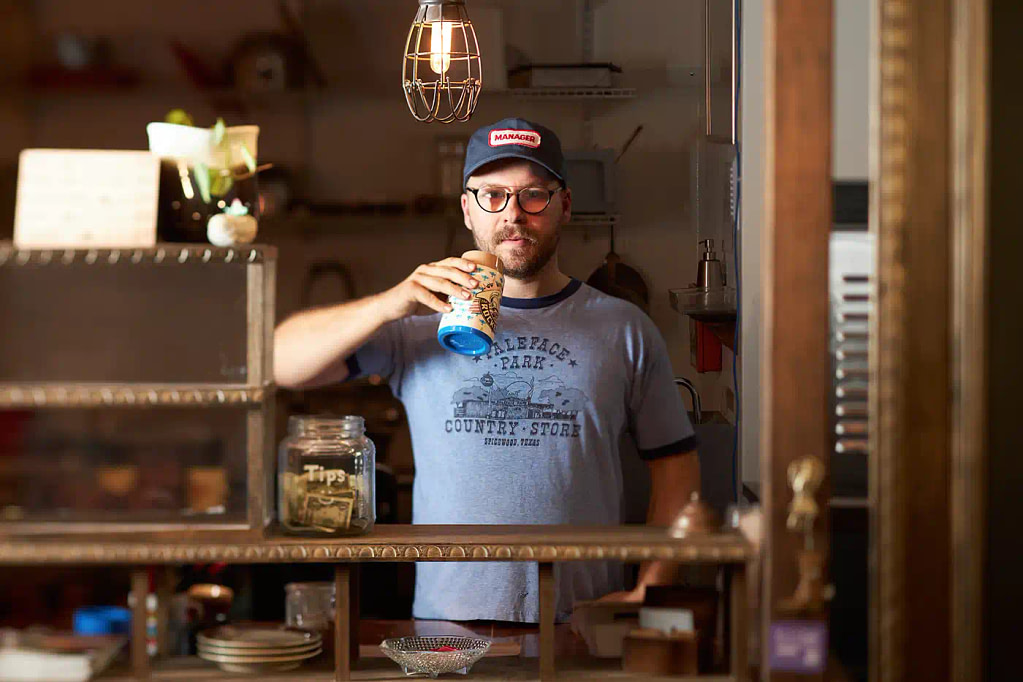 Located beautifully close to WinCo, Old Cuss Cafe is found in a strip mall plaza abutting an enormous mural stating “Nothing Lasts.” A fitting, if not defeating thought to have if entering the pet salon next door; I let the mantra resound in my head as I remember that I am about to have a cup of coffee at 5 p.m.

Old Cuss Cafe serves midwestern/high southern–inspired vegan cuisine. The interior so closely resembles an old west saloon that I kept resisting the urge to toss peanut shells on the floor. It’s a unique mix of “cafe with a lot of shit on the walls” and an active vintage thrift shop—I challenge you to leave without also buying something that isn’t food. Most available diningware appears to have come from an attic, and I quickly find that the walls are full but functional. Among the antique decor, pickled veggies and local products line the walls (including candles by fellow SLUG Contributing Writer Liv Greene). There’s an earnestness and dedication to character here, and this extends wholly into the food, as well.

Brent’lee Williams has been a coffee guy for 15 years, and Old Cuss is his first foray as a chef proper. “This chef thing came on accident; my mom is a chef,” says Williams. He runs his coffee program like a bartender and his food program as he would with coffee—if it doesn’t work, they take it off the menu. “That’s why it’s a magnet board and I don’t print a menu,” he says.

The Matcha Berry Pancakes are served in a properly fat stack with blueberries and purple orchid blossoms. Between the hibiscus powder that breaks the sweetness and the syrup served in a tiny glass barrel, it’s apparent every detail here has been thoughtfully considered.

The Black Currant Latte was so good that I can say for the first time I will not be embarrassed to order a coffee drink with several adjectives preceding it. The grittiness is on top rather than in the dregs; I’m informed it’s from activated charcoal and suddenly I’m embarrassed again. The latte is the blue-brown color of a paintbrush wash cup and the pragmatic creativity here is a great representation of Williams’ unique approach to coffee. The syrups are made from scratch and the beans are roasted exactly the way Williams personally likes by a friend in Kansas City. Williams knows a shit ton about coffee, and we’re all grateful this is the case.

The Sloppy Joseph, an Old Cuss signature dish, pays tribute to Williams’ childhood in Kansas City as a veggie-forward sloppy joe. Raised on Manwich, this (I assure you) vegan sandwich is dripping with nostalgia but has flavor and local ingredients you can’t find in a can. The sloppiness lies in the slow-cooked carrots, smoked mushrooms from Intermountain Gourmet, maple caramelized peppers and a satisfying crunch from a Korean chip Williams found at Chinatown Supermarket. “A sandwich that goes all over you is the one for me,” says Williams. As I wipe my face I am truly reminded of what it is to be a child in the midwest (messy). That said, it’s the superbly prepared Brussels sprouts that accompany the sandwich that remind me why I am happy to be an adult.

Williams wants this to be a plant-based restaurant for people who aren’t plant-based. The cafe is all vegan not because Williams is personally vegan but because he couldn’t justify the carbon footprint (among other things) of serving meat to 500 people a week. Besides, “meat only tastes good because you season it with veggies,” he says.

Keep up with Old Cuss’ rapidly revolving menu at @oldcusslc on Instagram. Old Cuss is also currently hosting a GoFundMe to plan for the future of the restaurant at gofundme.com/f/give-a-dang-for-old-cuss-cafe.