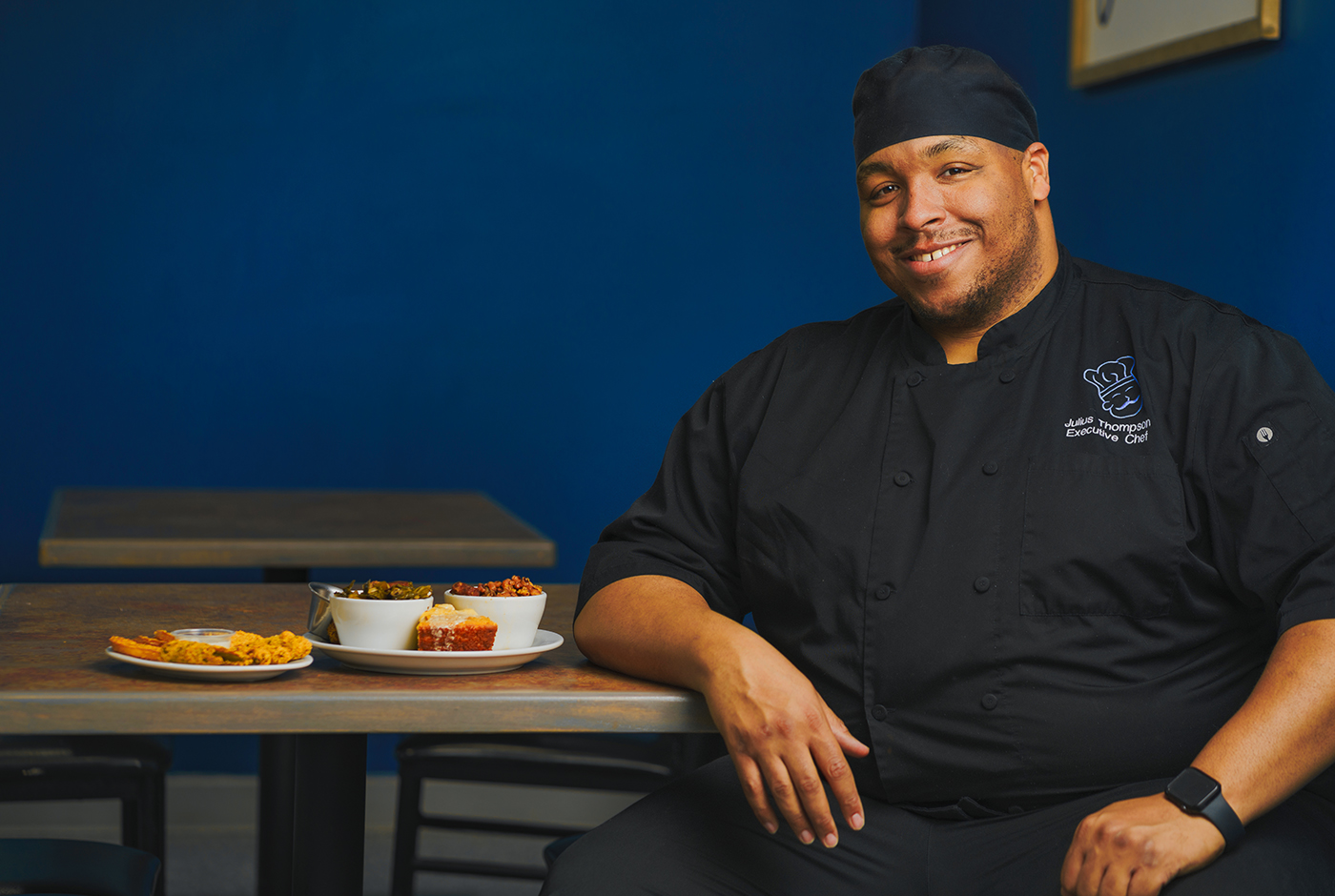 For Julius Thompson, the Owner and Head Chef at Sauce Boss Southern Kitchen, the path toward his culinary career was a personal one. “Everyone in my family has skills in the kitchen,” he says. “Growing up with little to no food made me appreciate it even more. My grandmother was the most talented cook in our family, and whenever I could, I would shadow her and try to absorb as much as I could when she was in the kitchen.” Such a framework—a combined reverence for family traditions and the glorious necessity of food—provides Sauce Boss with its defining approach to the healing powers of comfort cooking.

“Growing up with little to no food made me appreciate it even more.”

After a stint in the pharmaceutical industry, Thompson decided that food and being a restauranteur are his true calling. “I realized that even though being a pharmacist would make me money, it wouldn’t make me happy,” he says. “I was already a good cook, and I realized that food is one thing that brings people together. Whether they are of [a different] culture, country, religion or orientation, everyone wants and enjoys good food! When I was at my lowest, food brought me peace, and I wanted to bring that to others.”

When it came to selecting a focus for his restaurant, the choice of cuisine was an obvious one for Thompson. “Southern/soul food is near and dear to my heart,” he says. “Slaves were given scraps and unwanted pieces of meat and had to turn it into something palatable to eat and survive. The learned techniques and methods for turning something undesirable into something wanted are the base roots of soul food … Many African Americans don’t need to be from the South to know Southern/soul food, because it was taught and fed to us by our elders—it’s in our DNA!”

With an emphasis on deep-fried foods, rich fats and spices that heat you up from head to toe, the Southern cooking tradition provides the ideal base for Thompson’s food-as-family and food-as–force of life ideals. His approach hones in on a tried-and-true, authentic take on Southern classics, from entrées such as Catfish ($14.29), Blackened Pork Chops ($11.59) and Shrimp and Grits ($12.59) to a mouthwatering sides menu that boasts an array of delectable options, collard greens, candied yams and a mac n’ cheese dish among them.

“I was already a good cook, and I realized that food is one thing that brings people together. Whether they are of [a different] culture, country, religion or orientation, everyone wants and enjoys good food!”

For my recent visit, I started out the meal with the staple of Fried Green Tomatoes and Okra ($6), served with the restaurant’s house-made ranch sauce. The deep-fry technique at Sauce Boss, found across a number of dishes from my meal, stands as one of the restaurant’s greatest achievements. The thick, fried shell is made out of a grainy cornmeal breading, a dredge full of peppery spices and flavor-packed herbs. And the fact that each fried food held its crunch and shape even after my 20-plus-minute winter drive back to Salt Lake from the store’s Draper location testifies to the fry mastery found at Sauce Boss.

The second factor that separates Sauce Boss’ fried foods from the rest arrived through the interior vegetables. The tomato juices burst into my mouth from the first munch, and the bite through the okra was soft throughout, from stem to shell to core. Like the fried veggies, my Catfish entrée touted an almost unfathomable combination between a crispy exterior and a gooey-soft interior. The same cornmeal breading provided the body-warming spice, and the catfish inside was cooked to perfection—buttery, rich and apt to fall to pieces at the simple tap of a fork. If the fish itself was a marvel, the accompanying “soul sauce” was the push the reaffirmed the verisimilitude of Sauce Boss’ name, attaining a binge-worthy balance between the smoky, hot-pepper flavor of the sauce and the spices found in the deep-fry dredge.

Each plate comes with the choice of one or two sides (depending on the entrée choice), and I toiled between the eight options before settling on the Collard Greens and the Black-Eyed Peas. If the catfish was a gorgeous explosion of heat, the collard greens offered a more nuanced flavor profile. Though the greens had been slow-cooked to perfection—leaves intact, stems soft—they retained an element of their characteristic bitter bite, a quality complemented by the rich, lingering sweetness of the bacon bits. Sauce Boss’ Black-Eyed Peas came in their own seasoned sauce, but the experience was less an onslaught of flavor as they—to their benefit—reveled in the earthy grit of the beans’ natural flavor notes, a welcome counter to the surrounding dishes’ heat.

“Many African Americans don’t need to be from the South to know Southern/soul food, because it was taught and fed to us by our elders—it’s in our DNA!”

Of course, every entrée must also offer a “slice”—a word used liberally by Sauce Boss in its distinction from “slab” or “mound”—of cornbread, which walked the beautiful line between side and dessert. Sauce Boss’ thick cornbread capitalized on the inherent sweetness of its core recipe, augmenting the sugary cornmeal dough with a post-bake buttermilk soak that filled each bite with a succulent satisfaction.

Though the full breadth of the restaurant’s family-oriented communalism is currently on hold while the restaurant operates in a takeout-only capacity, Sauce Boss’ to-go orders still provide Utahns with the chance to bring soul-food comfort into their lives. While the pandemic has been as hard on Thompson and Sauce Boss as any other business, his unwavering determination carries the business forward: “I plan to continue to cook and write until my hands fall off!” he says. Find more information at saucebosssouthernkitchen.com.