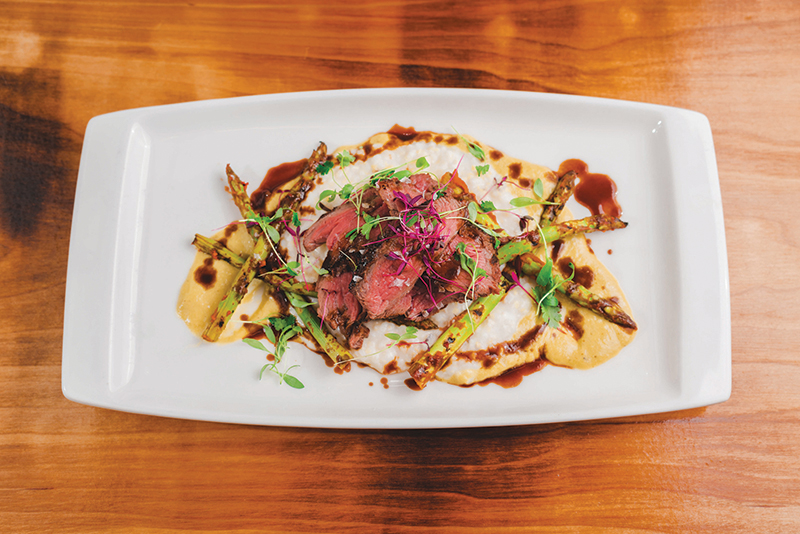 Writing about food in Salt Lake City is obtusely similar to that in the life of a restless teenager beginning to become comfortable in their own skin. Sometimes we’re hot and sometimes cold. There are also other times where we don’t know what we are other than proving to the world that we must create some impressionable statement as a means to achieve validation for the day.  I mean we’ve all done it, and the majority are better people for coming to grips with the fact that life is a constant trial-and-error cycle until the universe collapses. With that tone, I have absolutely no problem introducing SLC Eatery as the best version to that coming-of-age story.

This small metropolis holds a myriad of core, staple restaurants that hit a wide range of taste, ambiance and skill. Among them is SLC Eatery and their modern American cuisine. Today, we get to talk about cohorts, Executive Chef Logen Crew and Lead Proprietor Paul Chamberlain. If you’re unfamiliar with these guys, they’ve been developing Salt Lake City’s food realm together for 15 years—they’re also the people partially responsible for projects like Cafe Trio, Stanza, Current Fish and Oyster and their most recent, SLC Eatery.

What makes the most honest fine-dining experiences are kitchens where no secrets are kept. This atmosphere is met walking into and throughout SLC Eatery. Both of their kitchens face the public invitingly with a space that lets the guest watch food art unfold. While the menu changes nightly, the amuse-bouche on this night is a pickled tomatillo with herbed yogurt and cilantro. It goes down without a hitch and is the derivative of what a cucumber wishes it could have been back in its brine. At this pace, it’s not bad to take a stab at the tasteful Italian, Spanish and South American wine list.

As is tradition for SLC Eatery, first courses come in a rotating diversification that is the Michelin-worthy dim sum cart. This concept is translated as a nod to the San Francisco restaurant, State Bird Provisions. This precursory element, suggests that Utah is (in some way, shape or form) reaching their first star. Cart selections themselves vary daily, but the definitive treasures tonight are Charred Beets over hazelnut bulgar and apricot purée ($4), which one should pair with Peach Gazpacho ($5). The beets build off of the acidity from the amuse-bouche, while bulgar and hazelnuts focus the plate to a wholesomeness that would have otherwise been lacking. While the apricot purée cleans off the sharp edges of beet and mundane contours of grain, that peach gazpacho runs in like a bull and will change lives. There is, naturally, that sweet fruitiness reminding you that peach season is close. To contrast that sweetness, there are flashes of garlic, black heirloom tomatoes, brioche croutons and butterflied shrimp in the bowl to tie it over and send souls to Jesus.

Again, there is a pace aspect to eating well during extensive lengths of time. Easing into the heavier proteins, a round of oysters ($3 each) make the transition easy. What really manages to set the best of a landlocked oyster apart from the rest is a green-apple variation of leche de tigre. This is one of those scenarios that if you weren’t already sipping on a nice red Agapanto ($16), you’d be ordering any of SLC Eatery’s sauces by the pint. All that’s been missing through this journey toward enlightenment is a hunk of scorched cow. The chefs, in this case, call it Betel Smoked Beef ($33), and it looks like a beautifully treated tri-tip perfected for  the guest’s palate over grilled asparagus, creamy grits and what seemed like Bordelaise. This is one of those classic restaurant plates. In theory, cooking a steak isn’t that hard to do, but not ruining it is an art. On all fronts, SLC Eatery did anything but detract from the ever-growing affection toward this dinner service.

Fun fact: Fulfilling an appetite quota for the day is also, weirdly, best finished with a soothing shot of espresso as the check comes. This need can also only be earned after sitting through one of the best dining experiences—not just in Utah, but genuinely any place in the world where people care about food as much as SLC Eatery does. Reservations are technically custom to the atmosphere of the restaurant, but not necessary. The most appreciated way of dipping your toes into SLC Eatery is appropriately through slceatery.com or on Instagram @slceatery, then jumping in head-first into something memorable. Absolutely do bring loved ones, because you’ll want to share the night with people who matter.