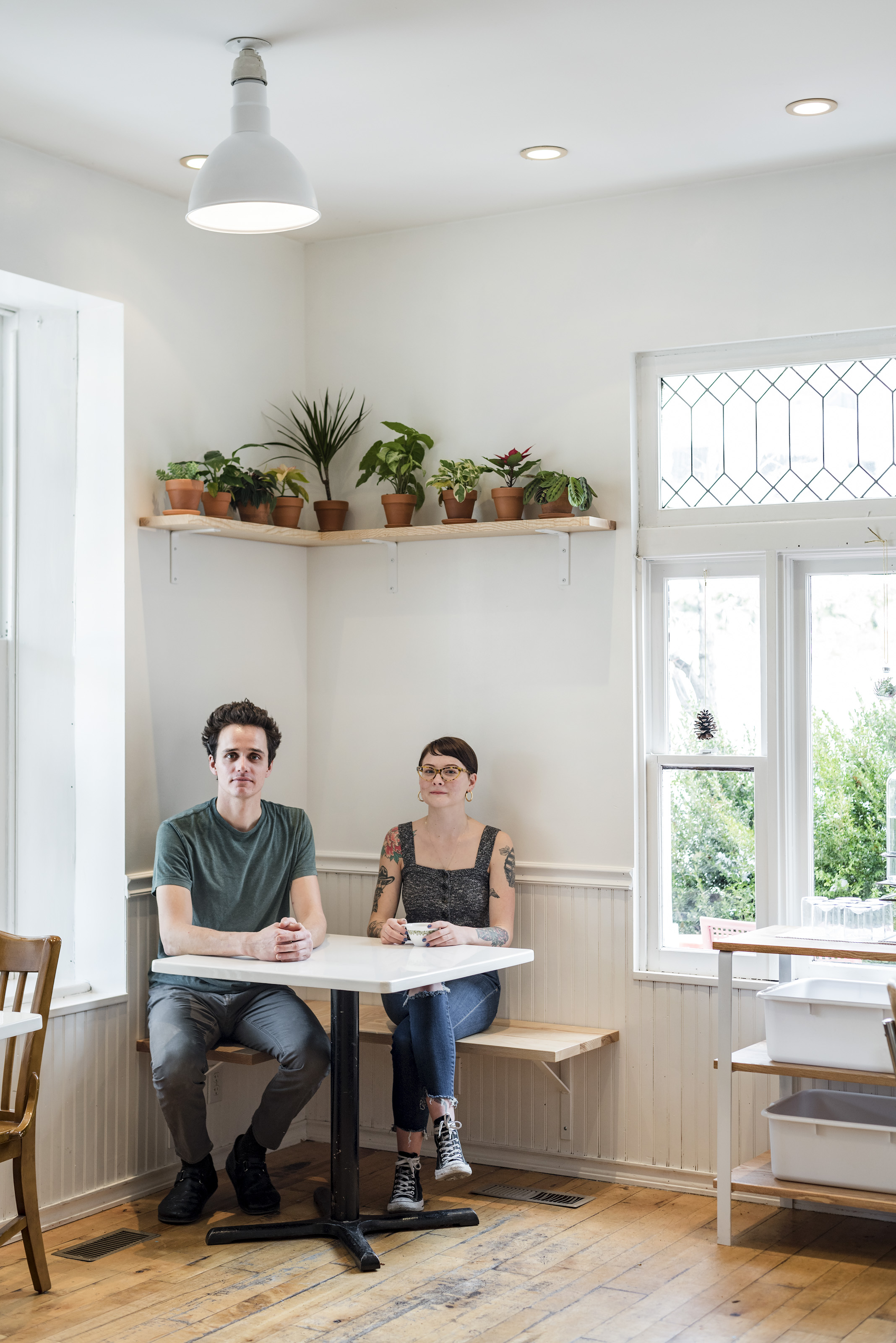 If someone asks me what they should see or do in Salt Lake to get a sense of our city, I’d suggest half a dozen or more things that anyone else would also likely suggest. Anyone will tell you to go to Temple Square—and you should. Though, if you’re asking me, I’m going to insist you’ll find some of the most interesting texture of Salt Lake in a place like The Dayroom, a small coffee shop on Capitol Hill.

Elaine Sayer walks me through the foundational tenets of The Dayroom. She handles beverages and curation while Milo Carrier does food, and Emily Gassmann owns and operates the building. In fact, The Dayroom directly connects to Em’s, a full restaurant equally worth visiting. Gassmann approached Sayer in May to spearhead taking the space over from Alchemy Coffee, who moved locations in October. Sayer and I are talking in late November, before the shop’s first full month has even finished, but any concern I might have had over how green The Dayroom might be is assuaged by my meal and my wine—my wine in a coffee shop! One of the benefits of operating under the umbrella of Em’s is The Dayroom can serve alcohol with any food. The menu features bagels and empanadas made by Carrier. The tacos and egg dishes are vegetarian, and Carrier is working toward vegan offerings. Drip coffee comes from Blue Copper, and espresso is a revolving guest roast. But, at the end of the day, The Dayroom stands out in its small, curated details of the space it occupies.

Curation may sound like an odd word to apply here, but the more I speak with Sayer, the more convinced I am that it’s appropriate. “I was 19, my car got stolen, and I ran out of money,” Sayer tells me. This was in L.A., where she got her coffee training. She moved to Salt Lake, worked at coffee shops and managed Kilby Court. Between learning coffee and renovating the space at Kilby, Sayer learned how to craft a certain environment. “Working on a space is very interesting,” she says. “I can create a space, but not for me. I will never be a stranger who comes [to The Dayroom] to read, you know? When I come here, I’m the boss. I felt the same way about Kilby—I could never experience a show [in the same way.]” As we talk the details of the shop—the chairs, tables, plants and art—come into focus. I notice Sayer’s cup is nearly identical to one my grandmother had. These details add up to a quotidian warmth, the kind whose exact source is always hard to put a finger on. Between Sayer’s stewardship, the homey glassware and the succulents lining the walls, the vibe feels distinctly young and feminine.

“I see a lot of women and feminine people stepping up, ready to make their own spaces,”

Sayer says. “Emily [Gassmann] did it 20 years ago, and it terrifies me. I go places now, and people still don’t take me seriously. They’re like, ‘You run a coffee shop? You look like you’re 12,’ which is fair because sometimes I think, ‘Oh god, I run a coffee shop? I’m 12!’” But Sayer impresses on me her keen instinct for this exact task: A fundamental goal for The Dayroom is to foster community art. Monday and Tuesday nights, The Dayroom will be hosting art and artist events from readings to open mics, and Sayer encourages artists of any kind and any skill to reach out if they’re interested in bringing their own artistic energy to the space. It’s hard to understate what that kind of encouragement toward informality of structure or process does for young artists, but at the very least, it’s obvious from Sayer’s own handiwork that hard work and quality can be unassuming.

The Dayroom sits just off 300 North on Center Street, a street you will likely never have another reason to run across unless you, like me, live or at a time once lived on Capitol Hill itself—aka the Marmalade District. Its small homes and winding, narrow streets seem cut apart from the city that sprawls below. At times, the hilly neighborhood feels perched in the heavens, as though you somehow won’t have truly been in Salt Lake until you’ve come down from above and walked its wide streets and long blocks. Instead, the opposite is true: Until you’ve walked the hills and spent an afternoon inside with The Dayroom, you’ll lack an appreciation for how Salt Lake has sprawled from its beginning. That a space like The Dayroom exists how it does where it does—it’s comforting.

From 7 a.m. to 5 p.m. you can experience it yourself, with additional food options during brunch hours on Saturdays and Sundays, 9 p.m. to 1 p.m. Visit www.dayroomandems.com for a full menu or to book a private event.