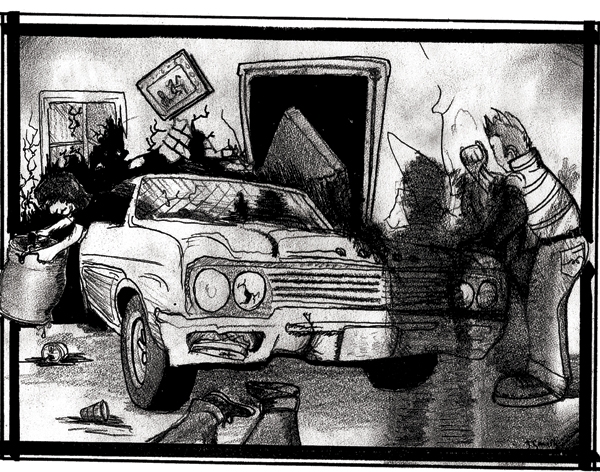 I love Halloween. With the changing of the leaves and the brisk fall air, something begins to happen. Kids reluctantly return to their dorms to get an overpriced piece of paper that says they can complete four years of listening to pretentious professors babble. In other words, they return to college.

And with this comes the return of the epic house party! House Party season correlates well with football season. And since I hate football, I’m gonna write about some stupid shit I’ve done at other people’s houses over the years.

I used to love crashing house parties. I have “being the unwelcome dipshit” down to an art form. Sometimes it’s totally fun to be the guy who the host keeps asking people, “Who the fuck brought this guy, and why is my toilet flooding, and why did he dump wine in the bean dip?” You’re welcome.

Anyway, I was recently invited to crash a house party that Natural Light threw for some guy who won a radio contest. It was held in the city west of where I live simply known as West Valley. The promise of free beer when I got there was the only carrot I needed on my stick. I’m a sucker for free booze.

I couldn’t be too disorderly because there were a lot of guys named Chad there who looked like they just got back from Iraq. But I did manage to steal about 20 beers, and when some girl who was catering food for the event gave me a bunch of stickers, I used all of them by seeing how many I could get on peoples backs without them noticing.
I called that the phantom sticker game. It was harmless compared to some of the other shit I’ve done at house parties over the years.

I’ve written a lot about drinking etiquette before, because of the bars I’ve worked at over the years. When you go to the bar, you need to show respect or you get kicked the fuck out. Granted, I’ve been thrown into the gutter in front of a drinking establishment a time or two, or 12 to 20, but I know that when drinking at the bar you are on their turf and you should show some respect.
For some reason, I feel the complete opposite about house parties. I don’t really go to them anymore, and I think it’s just the age thing: fortunate consequence of getting old. After 30, when you get invited to someone’s abode to booze it up, it’s no longer called a house party, it’s called a cocktail party and its not as fun.

So, the last time I crashed a house party I was probably the oldest guy there. This lead to feelings of insecurity, like I kept thinking in my head I had to keep up with the kids––Show them how it’s done, you know? So I got wasted and found a hammer. Me, tools, and booze is a bad equation any way you look at it.

I started smashing canned food and flicking it on people, then I talked Sammy, the drummer from the Naked Eyes, into climbing on the roof with me to pee on people. Looking back, I don’t know how I didn’t get my ass handed to me on a silver platter of fisticuffs. But I don’t think any of my urinary secretions actually hit anyone and the host was cool enough to let me stay at the party.

I don’t believe in karma, due to my distaste for hippies and horoscopes, but I did get hit by a car coming home from that party. So if the hosts still feel like they need justice from that night, it was indeed served.

When I was younger and the bar was not an option, house parties were your best bet for the two T’s in life: Tanked and Trim.
Here’s some other stupid shit I’ve done at house parties. One night, my friend Danny threw a party at his house, he did so all the time because he lived between a power plant and an office building and could be as loud as he wanted without the pigs showing up.

He passed out early one night and wouldn’t come out of his room. I was not satisfied with his behavior, so I broke his window from the outside and yelled at him to come out. He threw a punch at me, but was so drunk he missed by three feet and fell back asleep. So I lit his hair on fire to wake him up. He didn’t get burned or anything–I’m a fairly decent arsonist when it comes to hair (check the YouTube link on my Facebook, yo).

The ironic part about that incident was that during the next party Danny threw, the office building next door to him caught on fire and everyone had to leave. Fires are cool though. If you are throwing a house party and want everyone to leave, start a big out-of-control fire. It’s pretty effective for shutting things down.

Also, when I was younger, me and my roommate Paul would crash house parties and had the running policy that if they sucked, we would steal all the booze and have our own party. We were good at it too––we’d have someone create a distraction, like start a fight or something, and then we’d make our move, grabbing all the liquor and running like crazy.

Me and Paul also hung out with these crazy kids from Baltimore and Cleveland. Somehow, they knew about every house party that was going on every weekend. One time, we went to this house party with them and due to the high amounts of frat boys there, we clearly weren’t welcome.

So we stole as much booze as we could and to show that we didn’t like them or their house, Shatzer, the kid from Baltimore, peed in their dryer full of clothes and I peed all over the inside of their front door. Then we went around back, rang the doorbell and hid in the bushes. Giggled relentlessly as a frat boy opened his door with his hand now covered in my own pee-pee.

We also decided that night that since all the frat boys were partying at that house, that we should break into their frat house and steal their Playstations. Shatzer and I hopped the fence to the frat house’s backyard, but we were too drunk at this point to take our plan any further.

Basically, if a house party isn’t fun, I feel it’s good to take initiative and make it fun. Whether that means pooping in the top part of the toilet (commonly referred to as an upper decker) or pissing in the dryer.