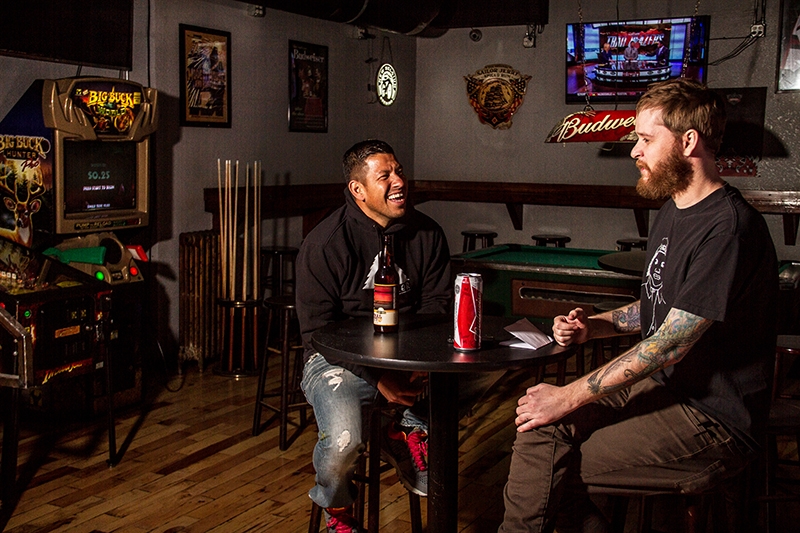 Finally: Mike Brown got to talk to a championship winner from a Utah sports team.
Photo: Jake Vivori

According to Wikipedia, Nick Rimando is a professional soccer player who plays goalkeeper for Real Salt Lake and the US national team. According to my drunk friend, Danny, who is an RSL season ticket holder and sometimes takes me to games, Nick is “like, the best dude ever!” So I figured I’d better interview him.

I told Nick up front how I know little about the sport because it’s not basketball. I did know that there are soccer riots because my friends, Dave and Quimby, saw one firsthand when they went to Spain, and I know that soccer fans like to drink constantly. Nick was cool enough to have a beer with me and explain some things about soccer.

MB: I went on a date with this girl a few years ago, and she left the bar with a Real Player, so I made a joke to my friends that “I got cock-blocked by a soccer player—must have been the goalie.” I know it wasn’t you, but is there another goalie on the team that possibly cock-blocked me?
Nick: He’s not with the team anymore, but it may have been this guy Kyle Williams. That’s a good story, though.

MB: Do you know the REAL fight song?
Nick: Yeah, by Branden Steineckert. Now he’s the drummer for Rancid … Not a lot of MLS clubs have them, but in Europe and South America, where the franchises have been there so long and have a lot of history, they have them.

MB: Well, RSL hasn’t been around that long, and you already have more championships than the Utah Jazz, so I’ll give you that. But at the last Jazz/Lakers game, you were there, in a Lakers jersey. Please explain yourself.
Nick: Well I am from the LA area and grew up watching and supporting them. If you moved to Wyoming I’m sure you would still be a Jazz fan.

MB: My friend Danny has season tickets and takes me to games sometimes, and I’ve seen things there that would get a fan kicked out of a Jazz game so fast. Even though I don’t know a lot about soccer as a sports fan, I love it.
Nick: Yeah, I think its great for our fans to support us how they want to, because we get the abuse when we go on the road. I think the MLS is slowly cracking down on it, though, probably to make it more kid-friendly. But I think it’s good—it brings character and passion to the game. I’ve gotten my fair share of slack from fans.
MB: What about throwing stuff on the field? What’s the craziest thing you’ve ever seen thrown?
Nick: I’ve seen coins thrown at me. Batteries have been thrown at me [and] bags full of piss.
MB: Whoa, like the Boston piss bomb? I thought that only happened at Red Sox games.
Nick: Nope, it happened to me before in Mexico. But in MLS, nothing too crazy has been thrown at me, maybe a cup of beer. I think the streamers are OK. Sometimes they get in my way a little bit, but I like it—it shows how passionate our fans are.

MB: Do you ever think that Salt Lake could have the same caliber of soccer riots that Europe has?
Nick: No, I don’t think so. I don’t think it would ever get that crazy over here. It’s a different culture over there, and a lot of times, when that happens, it’s in a really bad area of Europe. I’m not saying it’s a good thing, but it kind of brings soccer alive over there.

MB: Does the rest of the team make you sit by yourself on the team bus because you are the goalie?
Nick: Never. Soccer is definitely a very tight-knit sort of group sport. No one is really abandoned or away from the team.

MB: Is there such a thing as a goalie groupie? Like a girl who’s just into goalies?
Nick: I’m not really sure … I’ve never come across one, but there are definitely jersey chasers. It’s weird, though, because I think that they think that soccer players make way more money than they do.

MB: You got your own beer, right? How did that come about?
Nick: Yeah, it’s with Epic Brewing. I’ve always liked their beers and I was doing some promoting for them. This has been a great way for us to reach out to each other and help each other out … It’s a wit beer—it’s great for the summer. My idea behind it was a great beer to have for tailgating and when it’s hot outside.

MB: What’s up with your headphones?
Nick: I’m sponsored by Jaybird Sport. They are a local company and they make wireless, Bluetooth-compatible headphones. So they are super great for me when I’m training.

All in all, I learned a lot from Nick about soccer. One thing that you need to know about this guy is how much he cares about the RSL fans. It’s refreshing to me, especially since my sports idol, John Stockton, had a notorious reputation for treating fans like shit in public. Now I gotta go learn a fight song.