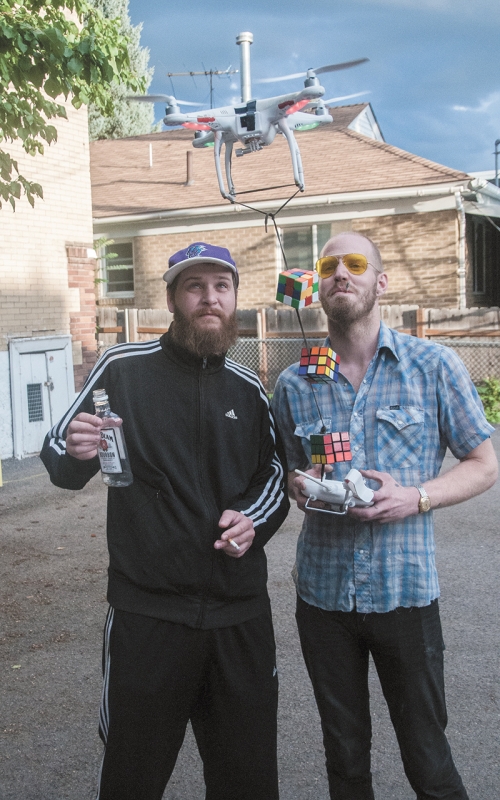 Anytime I need anything done regarding technology, I rely on my close friend, Jon Larsen. Whether it’s pirating software for my stupid Mac or just help figuring out my remote control, his vast knowledge of wires and everything electronic comes in handy. I thought that he would be the perfect guy to interview about technology. I probably couldn’t have been more wrong, but I still feel it was time well spent. Recently, Jon moved in with me and has been fixing everything from my emotions to my record player and other worthless mechanical objects that I have no need for—it’s fun to watch him fix stuff.
Jon Larsen is definitely what I consider a fixture in Salt Lake City. You can find him at Twilite Lounge every night of the week, right before last call, making girls feel creeped out and pounding tequila before finding a random house party. Other than that, the only time you will see him is if his band, God’s Revolver, is playing somewhere. Jon survives completely off of energy drinks, American Spirit cigarettes, Adderall, Pabst Blue Ribbon and tequila. I have honestly never seen him eat food—although, I have found several remnants of pizza boxes and empty Del Taco bags in my apartment, suggesting that he consumes some sort of matter.
Jon Larsen can fix anything, yet chooses not to. We talked at length about which robots that he would most like to have sex with. The whole time, I was thinking that he could just build the perfect model to have sex with, which, hopefully, would also do our dishes, because he never does. According to Jon Larsen, the most sexually attractive robot is KITT from Knight Rider, and it has nothing to do with David Hasselhoff. Jon informed me that KITT stands for Knight Industries Two Thousand, and he finds this incredibly sexy. Since KITT possesses the technology of AI (artificial intelligence) and can speak, the car could talk dirty to him while Jon fucks him in the gas-hole, unlike Jon’s car, which (though he’s convinced it’s a lot like KITT) can’t talk and is just dirty. The other robot Jon Larsen finds extremely sexy is HAL 9000 from 2001: A Space Odyssey. Jon also said he wouldn’t mind giving it to HAL because it can talk, too, but he would have to take the lens cap off to fuck it.
Jon is also a master at finding technological garbage at the DI and reselling it on eBay for ridiculous amounts. A few months ago, while meandering on his laptop via eBay, Jon came across a $500 drone and purchased it—all in the name of technology. The drone is actually pretty badass and is super fun to fly when you are drunk. He wouldn’t let anyone touch the remote control until I convinced him that all I wanted for my birthday that year was to fly the drone, and we did. It looked like a goddamn UFO, and there is already potential legislation to regulate drone use on the consumer market, so we better get our fun in while we can. The thing is surprisingly durable, but—as we have learned the hard way—drinking and droning has lead to several crashes.
I also asked Jon about the hot technological topic of 3D printing. I wanted to know his thoughts and what he would like to 3D print the most if he could. The answer was simple, but not surprising: a butt plug. He actually said that he had the CAD drawing for the one that he wanted already, but he hadn’t gotten around to doing anything with it.
Or maybe he would print more Rubik’s Cubes. It’s a little off topic, but Jon is obsessed with the Rubik’s Cube lately. He likened solving it to masturbation, which makes sense—fiddling with your toy until that glorious point of achievement. He stated that he even thinks about masturbation while solving it.
I asked Jon if, overall, he considered technology good or evil. He said, “Good,” because it’s the only thing that gets him laid lately. When I asked him to elaborate, he referred back to KITT from Knight Rider. I’m not exactly sure what he means by that, but Jon will always have a Rubik’s Cube to fall back on.
As far as Back to the Future II goes, Jon isn’t nearly as mad as I am that the technology portrayed in the film has not come to fruition yet. Self-tying Nikes would be pretty sweet, but Jon considers hoverboards far too dangerous for the general public and thinks that time travel is worthless in general. Jon stated that if he had a time machine, he would have to keep traveling back in time to ensure that it worked and that it would suck to time travel in your time machine only to have it not work somehow.
I then pressed Jon to tell me how he could use technology to finally pay me rent. His answer was that he would build robots for other people to have sex with and turn our apartment into a robot brothel. I’m not sure we have enough vacuum cleaner attachments to do that because we have hardwood floors, but whatever.
Photos: