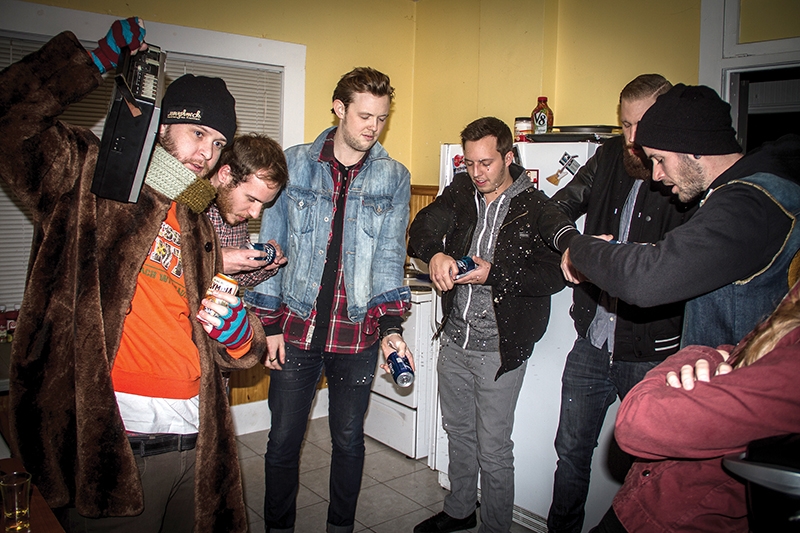 I’m not a big fan of house parties these days—I prefer my drinking on the idle comfort of a barstool or in the cozy confines of my couch. Maybe that’s why I usually end up acting like such a jackass when I go to a house party. Whether it’s peeing off a roof onto the partygoers or stealing all the alcohol because I didn’t like the host—both of which I am guilty of—I have oftentimes been simply known as “That Guy” at house parties.

For research on this article, I decided it would be a good idea to crash a house party, but house parties seem to cater more toward booze bingers a bit under my age demographic. So, I didn’t really have any leads on where one would be. Luckily, I live near a college campus, so finding one wasn’t a problem, but being the weird, old guy at the house party is just another version of “That Guy.”

House parties usually seem to fall into two categories: ragers or duds. How many times do you show up on someone’s porch and it’s like visiting a rest home with fewer sedatives? There’s nothing worse than showing up to a party you are obligated to go to with a shitty guy/girl ratio, empty liquor bottles and no music.

Showing up at a proper rager, however, can make for a great Friday night. There’s nothing like showing up to a party where it doesn’t matter if you are invited or not, kids are puking and shots are falling. This is the kind of shindig where, if the cops don’t shut it down, it’s not a success. One such rager I attended was equipped with a full DJ and PA, and when the cops came to shut it down, doormen quickly organized and locked everyone in, all while the DJ turned the volume up and played NWA’s “Fuck The Police.” I tried to step out to smoke and the doorman kindly told me that no one could leave until the fuzz were gone. I commended his dedication to keeping everyone safe, and shotgunned another beer.

This weekend, I found a proper rager to attend: loud music, people dancing, still plenty of liquor at 11:30 p.m.—all great ingredients for a rager recipe. Unfortunately, there was a total “That Guy” at this party and, for once, it wasn’t me. What made this guy “That Guy?” Well, I didn’t know him at all, and he grabbed my dick three times. It’s one thing if one of my buddies gives me a hearty, good-natured dick slap in the name of fun, but goosing guys and girls you don’t know is grounds for a smack in the mouth.

Starting fights at house parties is totally non-triumphant, though. It doesn’t impress the girls and, to make matters worse, I knew the host. Left hooks are disrespectful to the house and the host, and the problem with being drunk is you think you can fight way better than you actually can. Being too old to fistfight anyway, I let the mild sexual assault slide and walked home alone with a road soda.

There are a lot of things you should and shouldn’t do when you go to a house party. One thing you shouldn’t do, as I mentioned earlier, is pee on people. I learned this the hard way. Although the consequences for my actions weren’t initially enforced at the party, I did get hit by a car that night—instant karma that should warm the hearts of anyone who felt my warm piss that night.

Also, don’t be the guy who steals the booze, unless the party really, really sucks. Back when I was younger, I hung out with these dudes from Baltimore who specialized in this. We would go to shitty parties on purpose because, well, the liquor store was closed. They had an elaborate formula for such heists. We would start by casing the place, looking for the nearest exits and stash points, such as bushes and whatnot. We would place two people at the doors, and then create a distraction—usually using a girl to flirt with the host. Then someone had to grab the alcohol. Sometimes the getaway consisted of just running like hell, but, most of the time, we were smooth enough to get out of there unscathed. Now that I look back, those were good times.

Really, though, the best thing to do when showing up to a house party is to be the guy who shows up with a 30 rack, a beer bong and a pizza. You will be amazed at how many friends you will make. Or, be the guy who dances first. Starting the dance party is a sign of bravery, and girls will salute your shorts for such behavior.

Whether you choose to be “That Guy” or pizza-and-30-rack guy is up to you. But some things you always should do are: drink as much free booze as you can, be nice to the host and leave when they ask you to, and leave before the cops show up or you are asked to help clean up.