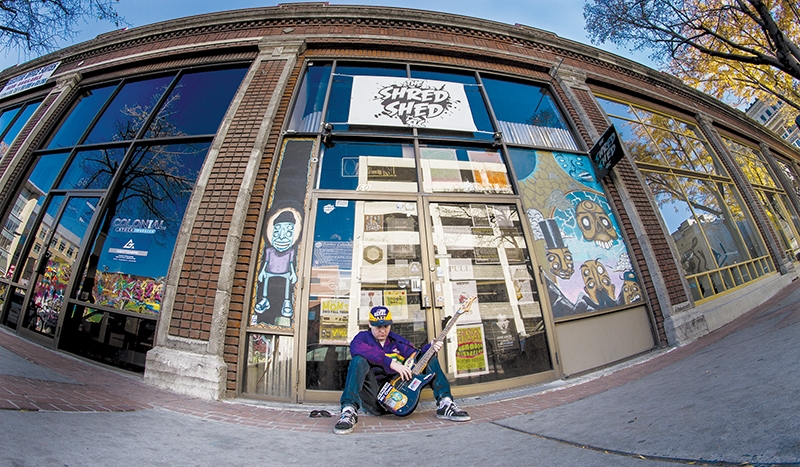 Mike Brown’s Monthly Dirt: Yer Out of Here! Kicked Out of the Band

I’m just gonna go ahead and start this article off with two of my favorite band-related jokes. Drumroll, please. How do you get a bass player off of your porch? Tip him and take your pizza. What’s the last thing the drummer said before he got kicked out of the band? “Hey, guys! Check out these songs I wrote!” Feel free to use those, people.

As many of you know, I’ve been in a punk band, the Fucktards, for about the last decade or so. Actually, it’s not really fair to call us a band—at this point, we are more of a “project” or some weird art experience—actual bands practice and don’t play the same six songs twice per show and call it a set. We seem to get away with it by letting people throw shit at us while we play.
The whole time I’ve been part of the Fucktards, we have never had to kick anyone out. Sure, dudes have quit, but I’ve never had to drop the axe. I suppose getting kicked out of the Fucktards would be like flunking special ed: very improbable and more embarrassing than being in my band in the first place.

So, I called a handful of friends of mine who have been in numerous local bands to dig up some funny stories and anecdotes to write about for this article about getting kicked out of the band. Some of the stories were pretty good, but due to Small Lake City syndrome and not wanting to hurt anyone’s feel-bads, unfortunately, I can’t really share any of those stories.

I did find something interesting, though. It started when I was talking with Dave Combs, bartender extraordinaire at Urban Lounge. Dave has been in numerous local bands over the years. I’ve seen him walk offstage in drunken stupors in the middle of a set, and heard stories of him throwing his amp at the crowd and threatening fellow band members with severe bodily harm while on tour. None of this behavior actually got him kicked out of a band.

He brought up that there are really only three real reasons that get someone David Lee Roth-ed: a massive drug problem, stealing money or missing practice. I called a couple other music-playing buddies and without bringing this trifecta up, two other people I talked to brought up the exact same three things for getting kicked out of a band. All three people said that missing practice was the biggest offense. Missing practice was the main reason Dave was not part of the recent Vile Blue Shades reunion.

This trifecta has begun to fascinate me. Although they are three different behaviors, they are related to each other in a vicious cycle of sorts. Think about it: You steal money to buy the drugs that make you too fucked up to go to practice. It’s like a messed up version of the Mormon holy trinity.

Also, while researching for this article, I started to realize that most of the time, when someone exits stage left, it’s not because they get kicked out: They quit. As long as you stay away from the trifecta, you can pretty much do almost anything else and stay in your band, especially if you are a lead singer. Frontmen can get away with murder. When I think of how many alcoholic, loser lead singers I’ve come across with whom I would never ever want to rock out, who somehow manage to not get kicked out, I’m a bit amazed.

The irony I notice with the trifecta of drugs/stealing/missing practice is the fact that drugs can make you creative and enhance your musical creations, whether it’s some blow or speed to stay up writing songs, or straight spiking smack to get your creative juices going.

It’s such a fine line to walk, but think of how many awesome musicians and artists have been inspired by drugs. So, I guess the moral of the story, and the ultimate recipe for success in the music world, is to do drugs, but don’t miss practice. Maybe that’s where the real genius lies, finding out just how the fuck to do that.