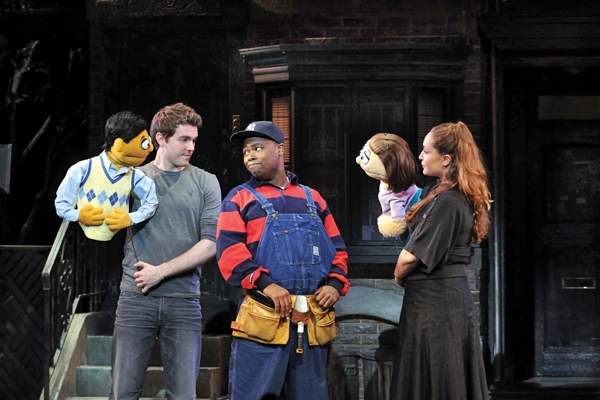 So, you loved Christmas Fantasy On Ice? Well, according to Johns Hopkins University professor Michael Fried, renowned defender of orthodox modernism, nothing is more harmful to art than blending genres. The term of abuse Professor Fried reserves for the illicit mixing of genres is Theater. By this he means not just stage productions but also multi-media, video and performance pieces, all of which began in the 1960s to challenge the purity and authority of modern art. What, then, might an Ivy Leaguer such as Michael Fried make of the musical Avenue Q, which lead actor Brent DiRoma calls an “homage to children’s shows, where puppets and humans live in harmony and learn lessons together?”

DiRoma, who appears in the touring production of the show, plays Princeton, a twenty-something puppet whose situation could recall that of Ben Braddock from the film The Graduate. DiRoma and I discussed the challenges and rewards of life as an actor and his experiences as a member of the cast of Avenue Q. Wildly successful on Broadway for over six years, Avenue Q will come to Salt Lake City this February. DiRoma says, “We’ve played Boston, Providence, the East Coast, and we haven’t had a bad reception yet.” In great measure, the show’s appeal stems from its decision to replace purity with an unrepressed blending of story, gesture, song and stage effects. But beyond that, Avenue Q’s writers Robert Lopez and Jeff Marx lock arms and merrily march further down the yellow brickroad to modern-art perdition by bringing together human actors and puppets, live theater and television. The result is a queered, coming-of-age Sesame Street in which the main characters are felt and foam and their puppeteers are fully visible.

Fried would be horrified, no doubt. But the cast of Avenue Q is more than comfortable with that, as are the numerous reviewers whose enthusiasm has helped the show win several Tony Awards, including Best Musical. Joyfully free of the modernist cult of purity, Avenue Q announces itself to be inclusive, popular and hybrid––unabashedly postmodern. DiRoma says these qualities allow Avenue Q to be great fun and yet also deeply serious. “We can say things through puppets, which we couldn’t say without them.” Pleased at the paradox, DiRoma says, “Make-believe turns out to be the place where we can be most real, most truthful.”

Thematically, Avenue Q is about personal risk, about learning to step outside protective institutional barriers and into direct contact with others. This is true for both the characters and the actors. “Right out of high school I moved to New York,” DiRoma says. “I   at the American Music and Dramatic Academy. When I graduated I was in a great place to play Princeton. I was him––just out of college and out in the world, and looking for a job. After years of study, I’d found no work after many months. Then, suddenly, Avenue Q. Actor and character converged.” DiRoma admits that after spending years learning to act through his own body it felt odd suddenly to put a puppet on his arm. “Schizophrenic,” he says, “but fun.” DiRoma is quick to admit the biggest risk he faced when accepting his current job. “I never imagined I would play a character who has sex on stage [via] a puppet.” He laughs and says, “I dreaded that part, that song. But the whole show sets it up. It’s actually not weird once you’re into the groove. Though we always get very different responses, sometimes laughs, sometimes a collective gasp. We feed off that energy.”

Is Avenue Q just for adults then? “It’s very much for college kids, where they are in life,” DiRoma says. While the show displays an open nostalgia for Sesame Street, it goes where a children’s show never could. “Instead of ABC’s and 1,2,3’s,” DiRoma says, “we explore relationships, obsessions and addictions.” Some older audience members have walked out on us, DiRoma says. But the show must always go on. “In Boston we had a school bus full of kids screaming and yelling for us,” he says. It seems these kids hadn’t found sources of social or cultural recognition prior to Avenue Q. “I saw Avenue Q for the first time with my grandmother,” says DiRoma. “I can’t think of a more awkward experience. But I learned a lot from it, and I hope other kids can do the same.”

DiRoma recalls the most valuable thing he learned in school. “Everyone has their own set of issues.” He says, “People are who they are and you can’t change that, only accept it.” He advises students to put off self-doubt. “Midway through school,” he says, “I realized so many people wanted exactly what I wanted. I felt like a grain of sand on the beach.” He believes this is true of any profession. “I wondered if I’d made the right decision. But you’ve got to go with your gut, finish what you start.” And acting had been in DiRoma’s gut since he was very young. “I always had a severe passion for performing, and I allowed myself to get lost in it, in the most healthy way. Now I’m living my dream.”

Acceptance, self-discovery, and ignoring outer and inner detractors––these seem to be the primary lessons Avenue Q invites its audience to consider as they create their own lives. Check out Avenue Q and decide for yourself what it has to offer. The production runs Feb. 2-7, at the Capitol Theater.