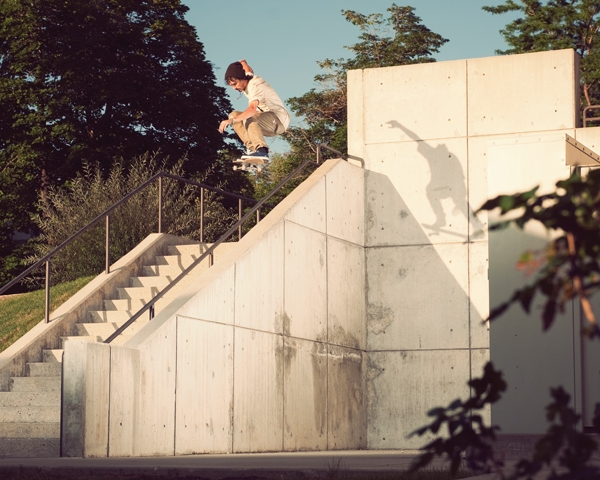 I'll save all you stair counters some time. 16.
Photo: Weston Colton

Getting Dirty with Matty Coles

Matty Coles isn’t one of the big names that to mind when you think of Utah skateboarding.  He hasn’t had a part in a DH/48/Random Lurkerz/SK801 video. He hasn’t been out to many skate contests in SLC because he is too busy managing the Blindside in Layton. In fact, most of his skateboarding has been done north of SLC—he grew up in Kaysville before migrating south to Salt Lake.

I’ve had the privilege of shooting with Coles a number of times, and have always been impressed by his skateboarding and his character. Coles doesn’t say a lot—he lets his skating do the talking. He is incredibly humble, yet completely confident in his abilities on a board. I’ve never heard a single complaint or even a curse word come out of his mouth when a spot was hard to skate, or the trick just wasn’t coming, or when I asked him to do a trick that he had never even done before (front nosegrind pop out). He always went for it and made it happen. Would you jump over a 16-stair ledge in Emerica slip-ons?

For this article, I wanted to incorporate Matty’s love for the outdoors into some of the photos we shot. On Labor Day, we set out to make something out of nearly nothing, and Coles didn’t disappoint.  After much lower-back strain from moving concrete slabs, a lot of dirt under the fingernails and one sacrificed set of bearings, here are the fruits of our labor.

SLUG: Do you prefer Matt or Matty?
Coles: I really don’t care, but I sort of like both for different reasons. “Matt” is what I’ve gone by most of my life, and that’s what a lot of my good friends call me. “Matty” is different. Depending on who says it, it’s either really personal or really impersonal. But strangers usually call me Matty—that’s why I like it. It makes me feel popular or something. I think I first started liking “Matty” in high school, because that is what a lot of girls would call me… and it made me feel like a total babe.

SLUG:  How has working in a shop changed your perception of skateboarding, as far as the kids, the scene, the industry, other shops (or mall chains like Zumiez), etc?
Coles: Well, skateboarding itself hasn’t really changed. I don’t want to sound too phoney-baloney, but “skateboarding” is what you do. It’s what YOU make it. It only changes if you change it. I think the thing that has changed for me is just how I’ve been exposed to the reality of many things skateboarding related and unrelated. The kids, the shops, the companies, the reps and the product… just like anything else, it can be very rewarding, but also disheartening. Things now don’t seem as simple as they were when I was just a stray shop kid. It’s a much bigger industry now, and it’s growing… for everybody except the shops. I feel like the industry as a whole has lost a lot of class. A lot of younger kids these days seem like they have little respect. They don’t realize there is no “best” in skateboarding. That applies to product, too.  It’s all preference. I say that a lot when I am at work. If these kids don’t wise up quick, they’ll lose the local skate shops, local teams and local support.  Save a skate shop—don’t buy ZUMIEZ!

SLUG: What are some of your interests outside of skateboarding?
Coles: I’ve gotten into a little bit of everything from electronics, computers and video games, to cars and sports, to sewing and crafts, to drawing, photography, and video work. But what really makes me happy is anything outdoorsy. I love it so much–hiking, climbing, backpacking, camping, fishing, hunting. That’s what I am really interested in. I love the adventure of it, the exploration, the danger, the peace, the beauty, the freedom and the simplicity. I also really like traditional archery. I would shoot my recurve every day until I moved to Salt Lake. I’ve recently moved again into a house with Dirk Hogan, Tony Washington and Cameron Starke. Now that I have a backyard again, I’ll be back at it.  I really wish I could just make for the mountains, start a colony and live off the land. Someday.

SLUG: Only one of the tricks we shot for this article was filmed (the 16 stair ollie). What are your thoughts on filming and how does filming affect your skating?
Coles: Well, first off, let me say that I think filming is great. I love being able to make a record of something you do and work hard at… and then being able to take a collection of these records and make something you’re proud of to show people is awesome.  I especially like taking photos because they seem so timeless. I had actually never filmed or been filmed skating until a couple of years ago when we made the SHOTGUN video. I think the first trick I ever filmed was on a 12-stair handrail.  It’s like a treat for me when I get a chance to go out and film, so yeah, I want to do something worth filming, while I have the chance. Having said that, I’m not trying to go pro or anything. When I film, it’s for fun, and mostly it’s for me. I’ll never see something I want to do and not do it or wait just because I don’t have a camera. Skating is one of the hardest things I do, but I can’t stop. I love it too much. That’s why I skate.