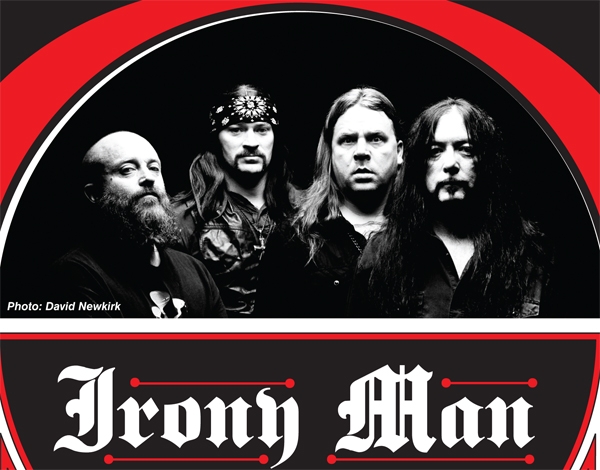 October is upon us—a month where dressing up or allowing oneself to be another person or character is accepted as the norm. SLUG’s Localized features two bands that take on characters and personas on a regular basis. Irony Man channel the sound and members of early 70s-era Black Sabbath. Poo Pee D and the Family Jewels take the approach of being larger than life, performing as ingloriously odd characters. Kiss Thiss, a Kiss tribute band, will open up the star embodiment night. It all takes place Friday, Oct. 16 at the Urban Lounge.

Irony Man are a Black Sabbath cover band that play the 1970 to roughly 1975 era of the band’s music. Despite being a cover band, Irony Man is not copying a style for easy attention, recognition or money. They perform in a cover band because of their adoration for an era and genre they love.

The play on words for the name of the band itself has a nice reference to why they came to do what they do. “‘Iron Man’ is one of the most well-known Sabbath songs, and [Millhem] just put a twist on it, because it was kind of ironic after all these years of playing in original metal bands that we’ve all come back around full circle and are playing in a goddamned cover band,” says Sundeaus.

The guys joke a fair amount about the validity of what they do, saying it would be nice if Sharon Osbourne heard them and wanted to give them an endorsement. Joking aside, the band takes what the do seriously, but with a light step. “I don’t know if cover bands are relevant or necessary, period. I always said in my younger days I’d never play in a cover band unless it was Black Sabbath, just because that’s the only band I could really see pretending to be and enjoying it, something you can take some pride in playing the songs and not feel like a tremendous asshole just trying to make money,” says Upchurch.

Irony Man is all about embodying the specific vibe of the original and highly influential Black Sabbath songs. Sundeaus, Millham and Upchurch all wear costumes while performing to meet this goal. “We want to make it more like the Black Sabbath experience, like we are the band. For all those people that never got to see the original Sabbath during the early 70s, we want to give them that experience,” says Upchurch.

“I try to channel the ghost of Ozzy,” Sundias says. “Ozzy hasn’t had a soul for the last ten years. It’s been cruising around in limbo, so I try and channel that, and every once in a while I get it.”

Expect to hear the Black Sabbath you know and love and the songs that molded what metal is today. Though the guys are always open for requests, they admit they’re still learning some of the later albums. Just don’t expect to see Irony Man playing “Rock and Roll Doctor” or “Johnny Blade” anytime soon. Although many cover bands have a gimmick or play songs from different artists, Irony Man sticks to Sabbath. “If you’re a Sabbath fan, you’ll love us, but if you’re not a Sabbath fan, you’re not going to like us,” said Sundias. 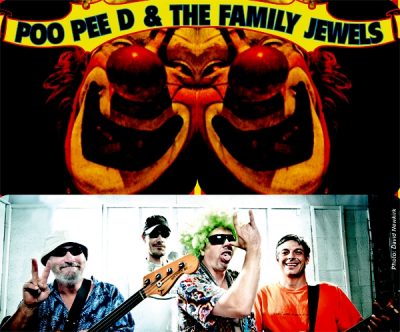 Meeting up with Poo Pee D and a few of his band cohorts at his undisclosed compound, I found myself amongst a crew of delightfully deranged oddball characters. They have irreverent attitudes, are nowhere close to drug free, drink excessively and do anything they can to entertain themselves and their audience.

From the get-go my bullshit detector went into full swing. Poo Pee D claims he is originally from Atlanta, where he spent eight years in prison until he gained the financial support from the Millionaire, who brought in a helicopter and broke him out. The duo then rescued the Molester, who was dumpster diving at the time on the Atlanta streets. “When Poo Pee D found me it was raining like a cow pissing on a flat rock there in Atlanta and he saved my life, praise the lord,” says the Molester. Right …

Stories like these wove their way in and out of our interview, leaving me to decipher fact from fiction. The band is great at blurring the line between fantasy and reality, which actually give them some credibility. Instead of coming off as a lame gimmick, you end up with some genuine fun.

Each member has their own persona and they play off of one another quite well. As to how Millionaire is a millionaire wasn’t fully divulged other than he’s the bands Adidas spokesmodel. He also hopes to become a billionaire by developing a way to smoke weed through the Internet. The fact that the Millionaire arrived in a Porsche and was wearing a hefty and expensive looking watch, only added to the confusion of deciphering reality.

So what is real in the ridiculous world of Poo Pee D? When Poo Pee D isn’t performing, you can call him Jamie Shuman. Shuman has played in a number of Utah bands since the late 80s including Crapshoot and the notable hardcore/punk outfit Massacre Guys, who toured with the likes of The Dead Kennedys and TSOL. Throughout the Massacre Guys existence, its members included Stephen Egerton & Karl Alvarez who later on became members of The Descendents in 1987 and eventually formed the band All. It looks like there are crucial pieces of SLC hardcore history behind the mystique of Poo Pee D.

“We actually try to be un-cool as or un-hip as we can, as well as to be completely devoid of anything that would fit the modern musical mold,” says Poo Pee D. Although their sound may not be rooted in Shuman’s musical past, the attitude seems to remain the same.

Poo Pee D hopes that he can get a lot of plastic surgery done as well as a new hairpiece in time for the Localized show. “We have no idea what we are doing at any time. I plan on being blackout drunk by song three,” says Poo Pee D.
According to Millionaire, this is when his voice really comes alive.

Come out and witness the ghosts of 70s era Black Sabbath with the juxtaposition of the ludicrous and ridiculous sounds of Poo Pee D and the Family Jewels. The show takes place on Friday Oct. 16 at the Urban Lounge.