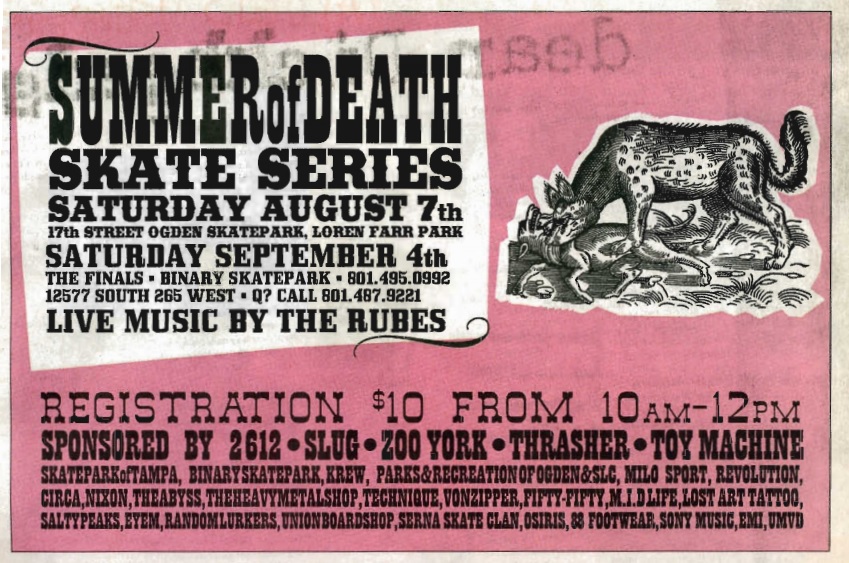 Here’s your Katchup for September! Peep the pic of the Red Bull Inland Wake Skate Session held on Aug. 30th at the Gallivan Center. Kampus team rider Clint Tompkins slides up a wet, slippery piece of lumber while a couple of hotties check out his…mad steez. Fellow riders Lief Erkkila and champ Phillip Bassino were also on hand. Check out Alliance Magazine’s January issue for full coverage of wake skating in Utah’s lakes, ponds and ice rinks. “Let’s drink a Damn to the Halter, lads, and them that lives to wear it”–Bartholomew Roberts (Captain Jolly Roger)

Mark your calendar for September 19 for International Talk Like a Pirate Day. www.talklikeapirate.com For myself and most of you out there, this will be a first to speak of. Let it continue to be a tradition with us mates.

The “Sturgis of skateboarding” passed through the boarders of out fair state last month. Thrasher Magazine hosted their yearly scavenger hunt where they had to find an unskated pool in Utah, besides the Ogden pool. Every member of the hunt had to get a trick (even the cameraman) before declaring victory and collecting the booty. Look in Thrasher for the King of the Road photo featuring Utah coverage.

September 4: Binary Skatepark is hosting the SLUG Summer Of Death Finals. The top five winners from the last three contests (Park City, Jordan, Ogden) will compete. The overall winner of the series will be blinging with a new watch from Nixon and enough swag to last the winter through. 12577 S 265 W. If you get lost call 495-0992. Live music from The Rubes.

The following Monday after the contest is the ever-popular Labor Day. We are so worked as American’s we found it necessary to make a holiday for sitting around watching American Idol, wondering why all the liquor stores are closed.

The weekend of September 17 has plenty to wet the appetite.

As crispness falls into the air and the jackets are coming out of the closets, the snowboarding community is releasing the latest movies in the sport. Several made history here in the mountains while others made history in our streets and on our cities rails. Here is a break down of the places to catch the latest flicks hosted by MILO. New site up and running www.milosport.com

After the premiers on Sept. 17 Gibby Haynes and the Problems live at Urban Lounge, brought to you by Alex Woodruff and Mike Sartian. Gibby is the former lead singer of The Butthole Surferes and is sure to entertain.

Finally, The Pixies will be playing a sold-out show at Kingsbury Hall on September 28 after reuniting earlier this year. They’re on the verge of releasing new material as a group and after seeing their reunion show at Coachella, I hope you have not slept through a chance to buy tickets. I’m sure you’ll here a dedication and salute to Palace of the Brine. Briny Deep indeed.

For more information on the scene and what is going on check out SLUG Magazine’s updated site. www.slugmag.com