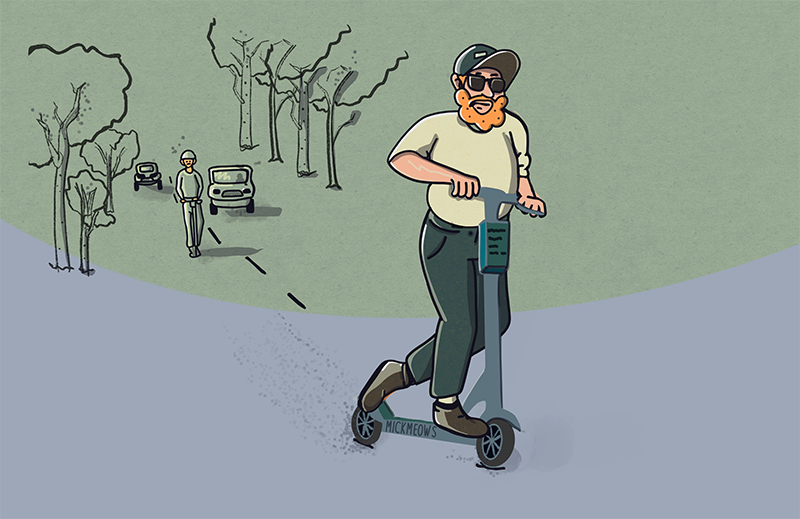 I understand that transportation is a necessity in America. It always has been. And it’s always evolved—from the horse and buggy to the car, from the locomotive to the airplane. The ingenuity of the American entrepreneurial spirit has progressed the way we travel and get from point A to point pee. But I feel that there is a regression instead of a progression in our modes of transportation in our current society, and I’m calling it out quite bluntly: It’s the fucking scooters.

That’s just what I call them personally. You can chalk this article up to an “I’m an old man! Get off my lawn” rant if you want. I don’t care. I’m gonna say whatever the fuck I want about these two-wheeled bastards and those who ride them. I have numerous issues with the fucking scooters and scooter people—and scooter culture in general.

The first one I’ll address is safety. I don’t mean that in an altruistic sense for the scooter people—just clinical safety and the hypocrisy at play here because, in some ways, idiots weed themselves out. But while researching the scooter people, I googled an article one of the companies published saying that they strongly recommend having a helmet on in order to ride one—mostly because it’s a legal requirement in some states, and Bird tried to get the helmet law repealed in California in 2018 anyway. The next article that popped up on my Google feed was from a major local newspaper saying how ER visits were up 160% since the scooters scooted into Salt Lake City. As one of the many uninsured citizens of SLC, the irony honestly makes me laugh.

“Why is it illegal for me to ride my skateboard Downtown when every drunk idiot with a debit card can hop on one of these two-wheeled bastards?”

If you want to ride your motorcycle or scooter with no brain protection, I’m all for it. Freedom of choice and freedom of speech will always be dear to my cold, black heart. But it’s funny to me that in the article I referenced written by the fucking scooter people, they point out that everyone who rides one legally needs to ride with a helmet. I don’t see too many cops giving out tickets for people riding them without helmets. But its not like I really ever see cops doing their jobs right in the first place. Like, I can’t legally ride my fucking skateboard Downtown without getting a ticket from a pig. And I actually know what I’m doing, as opposed to some drunk fucking scooter person. But they aren’t getting a ticket, are they?

Also, you ever see two people on one scooter? How cheap are you motherfuckers? You just got done stiffing your waiter at Applebee’s and your credit is so bad you can’t even call a Lyft? So two of you hop on one scooter so you can go to the Trax stop Downtown to get back to the hole you climbed out from. Wow. “Two girls, one cup” is less gross than two people one scooter.

Maybe I’m just getting old—I don’t know. But what the fuck is wrong with just walking? I feel if there was anywhere I would need to get to that hinged on whether or not a scooter would be useful, I’d just walk. Like, you can’t take a fucking scooter from Downtown to Sandy, can you? If you just need to go a couple blocks, light up a blunt, plug in your headphones, enjoy some Downtown ambiance and Chevoro-leg that shit.

“‘Two girls, one cup’ is less gross than two people one scooter.”

I wonder if the fucking scooter-people thing has anything to do with the fact that the rich guy who acquired the Segway company actually died riding a Segway. Remember that? Maybe there’s some sort of JFK-conspiracy thing going on (sorry, I’m smoking a ton of weed right now), where the head Segway guy dies on a Segway and now you don’t see ANY Segways Downtown, just fucking scooters. Whoa! Did the fucking scooter people push him off that cliff on his Segway? Think about it, folks.

Of course, it’s not funny when anyone dies in a tragic accident, but the irony is there. Like, what if Elon Musk dies in a Tesla car crash? I wish no ill will on people, but I do wonder if the people in charge of the fucking scooter charade Downtown actually ride them themselves. I really hope they do.

Aside from all of this, a close friend of mine ate shit on a fucking scooter and is recovering brilliantly and bravely from some serious injuries—and honestly, it was mostly a fluke accident. I would have written this piece even if her accident hadn’t had happened. Like I said, I have no problem with people doing dangerous things. I just mostly want to end this article by asking the city or whoever the fuck is in charge of the fucking scooters: Why is it illegal for me to ride my skateboard Downtown when every drunk idiot with a debit card can hop on one of these two-wheeled bastards? I’m OK with skateboarding being illegal because “I’m a rebel, Dottie, a loner” (cue Pee Wee Herman voice). But seriously, fuck you guys.