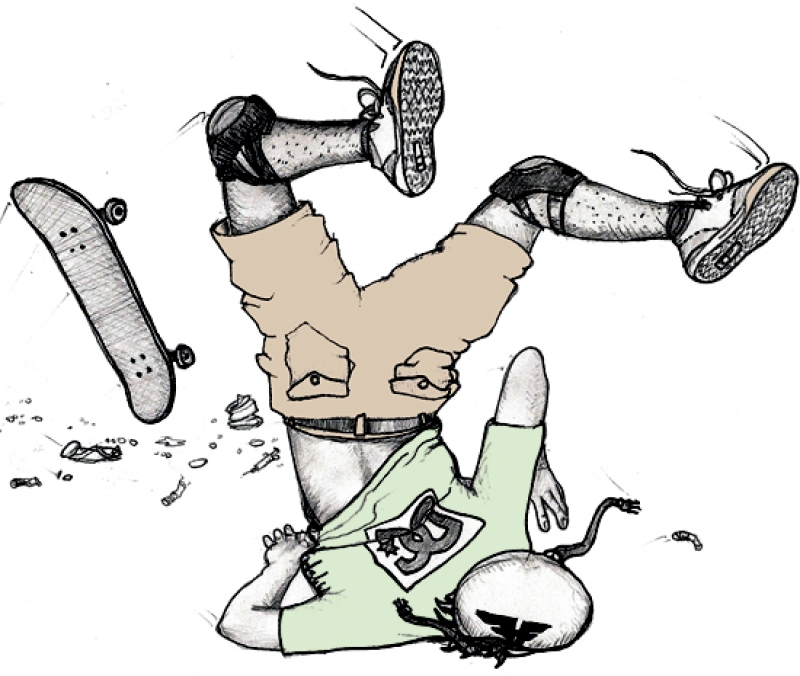 I thought I was running out of shit to write about for this column, but then I went to Fairmont and realized I just have to take a look around to see what’s really pissing me off these days. This month the one-upper shit bags are going down. If you don’t know what a one-upper is, you’re probably better off. If you are a one-upper, read closely and then go kill yourself.

A one-upper is a fuck face who does the same trick you’re trying to do either with ease or a cooler variation of said trick. The typical one-upper will most likely throw you a look back stare or make sure you are watching when they do their shit. Sweet, you are so good at skating you’re now mocking your peers. Maybe you can get a spot on the Plan B roster, but I seriously doubt it. I mean, who can one-up those son of a guns? There is pretty much nothing more jocular in skateboarding than one-upping, except for maybe the X Games or Dew Tour. That’s pretty much all one-upping is: a contest between you and some innocent bystander.

Well I’m about to let you one-upper goons in on a little secret: there is no place in skateboarding for your sorry ass. No companies want a cocky little fuck on their team. Can you imagine a one-upper on Anti-Hero? Yeah, I’m sure you would fit right in. Oh and by the way, if you’re trying to one-up somebody over the age of 25, blow it out your asshole. The fact of the matter is anybody that age or above probably did the trick you’re doing  a decade ago when it was actually created.

No need to worry my little one-upper buddies, there is still hope for you. You can start by changing your whole attitude. Skating is fun and not a contest (except with yourself). Another good thing would be to try and go out and actually make friends with somebody because everyone knows one-uppers don’t have any friends. Go skating with others that are above your level of excellence. This is how you learn and truly become humble. If none of this works, try skating vert, then quit skating altogether because you’ll figure out that you really suck at it. Oh yeah, before I forget, remember it’s O.K. to fuck off. Peace fools!