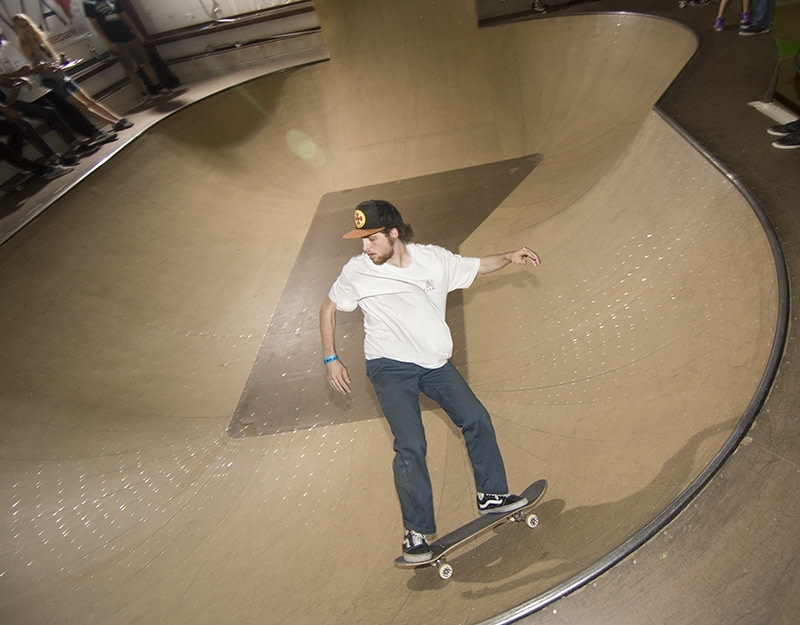 Jack Massey switch frontside carves his way to 3rd place in the 18 and over open division. Photo:@_chriskiernan_
Photo: @_chriskiernan_

Skate decks echoed the sound of claps as they were thumped by contestants and spectators alike, after watching Parley Southworth, 24, complete his winning trick—a truck driver disaster from a waist-high ledge into the bowl. This was the Summer of Death Presented By Monster: Bowl Jam at Banzai, SLUG’s 16th Annual Skate Competition Series in Lindon on Saturday, June 20.

Though the day’s heat was intense in Utah Valley, it didn’t stop any of the contestants from destroying the park’s tight masonite-slick bowl, measuring at five 5 deep with a wall ride 10 feet high. Milo Sport owner Benny Pellegrino, who was emcee of the event, was anxious to see what the riders would do with wall ride, called the tombstone. “Each rider must have enough speed and ride the corners well in order to do anything on a wall like this,” said Pellegrino. Having the event centered around Banzai Skatepark’s epic bowl brought out skills (and balls) you wouldn’t expect from the skaters.

For instance in the Little Buddies category—17 and younger—the three groms who competed carved smooth figure eights, went for airwalks, and tried their skills at 50-50 grinds. Mason Webb, 10, gave the crowd a good scene when he attempted a kickflip off the wall ride, but fell—we were impressed with his warrior-mind tenacity shown toward the tombstone to begin with! Overall, each little buddy killed it, considering two of the three competitors hadn’t really ever skated a bowl until the day of the competition. Ogden’s Sean Sweat took First Place; Mason Webb, 10, came in Second; and Jude Wolsey, 13, placed Third.

The Open Division was a much steeper competition than the Little Buddies category. There were six riders total, and about half of them skate Banzai regularly. With that in mind, a lot of the kids competing cheered each other on and pushed the level of skating. But regardless of the bromancing, a few of the skaters were worried about Jack Massey’s bag of tricks, who is on the Banzai Team along with competitor Elijah Scmidt, aka Elijah Bleue, 20.

In the Open Division, each competitor was judged on their flow, how well they linked lines, and of course, their originality. “What we don’t want to see is a skater pushing around like a spider in a sink,” said Mike Muirhead, who was judging the event. Spider-like skating, however, was the last thing these contestants gave the crowd and judges. Though each skater varied in years of experience, most of them showed up with shredding confidence.