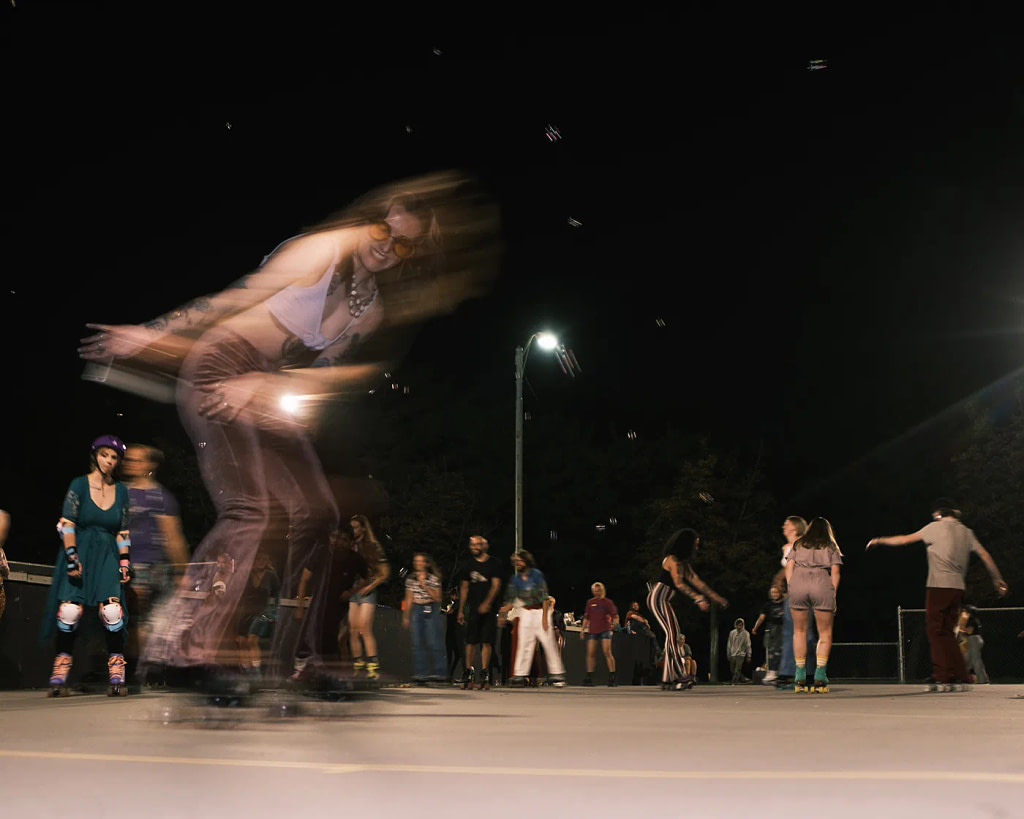 Skate Babes’ biggest goal has been to get as many people on skates as they can.
Photo: Nicholas Coletti

The Babes Are Back In Town: SLC Skate Babes

Of all the groups and hobbies that cropped up during 2020, Skate Babes has proven itself to be among the most resilient, fun and inclusive community-minded groups. Skate Babes meets most Mondays in Salt Lake, inviting anyone and everyone who wants to skate, organize or just hang out. The roller skate group turned collective comprises many, but in particular, Paloma Young, Natalie Blanton, Eliza Mayer, Brecken Jones, Zachary Taylor, Joey Simpson, Travis Perish and Cherry Garcia help organize Skate Babes into the community pillar it has become.

Skate Babes started with a group of friends who missed each other. “I think it came about naturally,” says Taylor, “in the way that a lot of people picked up hobbies during the pandemic.” The group would congregate with a tiny bluetooth speaker “anywhere we could find a smooth surface,” says Blanton. At first, this usually meant vacant parking lots. The group had their first true community meetup at the Liberty Park basketball courts. Eventually, Beehive Bike Polo offered their space at Jordan Park. “That’s our home court for now,” says Blanton. “We gather every other Monday over the summer, or the proper skate season.”

Those beginning months were important for establishing the tenor and gravity of what Skate Babes’ had the potential to be. “It happened to coincide with the protests that got big in Salt Lake two summers ago,” says Taylor. The chance to organize around these historic events inevitably lent the group a sense of activism that they later channeled as they cemented the collective’s values. “Now that it is about skating, we still carried over that feeling of importance, purpose and community,” says Taylor. “We honor any demographic that wants to come out and get their groove on. We welcome newcomers and do not want anyone to feel timid or turned away.” Non-skaters are even welcome to bring a blanket and some friends and just enjoy the party.

“We gather every other Monday over the summer, or the proper skate season.”

Community fuels this activism. You see this in the way Skate Babes puts together events, which strive for inclusivity, collaboration and fun theming. “Skate Prom was really good,” Taylor says, “because not everyone had a good experience with prom. We were able to give everyone a little taste of what that should have been.” Last year, they did a bring-your-own merch night. Attendees could get custom printing done in collaboration with screen printing artist Taylar Jackson, known as @gothsloth on Instagram to most. The group has collaborated with People’s Energy Movement, Decarcerate Utah and Missing & Murdered Indigenous People, to name a few. Their events are almost always free, with a few paid nights in every season to help pay for things like renting out Classic Fun Center’s skating rink during winter months. Keeping the events accessible is important because of skating’s roots in Black history and social justice. “We have worked to make sure most of our leadership decisions are headed by People of Color,” says Blanton, “honoring the legacy of roller skating.”

The group’s goals have expanded since becoming a more structured collective. “Our biggest goal has been to get as many people on skates as we can,” says Taylor. “I think we’ve done that a little too well—it certainly has changed into dreams of us having our own space.” Flat, skateable real estate is at a premium, especially during winter months. The collective has considered becoming a nonprofit, but as Blanton says, the fluidity afforded by a collective isn’t something they’re eager to let go.

“Our biggest goal has been to get as many people on skates as we can.”

It’s finally warming up, and 2022 has a lot in store for Skate Babes. In July, they’ll be partnering with the Utah Film Center for a screening of works that cover the history of skating and racial justice. The skate season will open May 9 with a 2000s theme and DJ Key1 and will continue every Monday from there until Halloween. Follow Skate Babes on Instagram @slcskatebabes for info on upcoming events.

Read more on Decarcerate Utah and Missing & Murdered Indigenous People
A Show For A Cause: Salt Lake Community Bail Fund Hosts a Virtual Halloween Variety
Carl Moore is Protecting the Future of Our Global Family