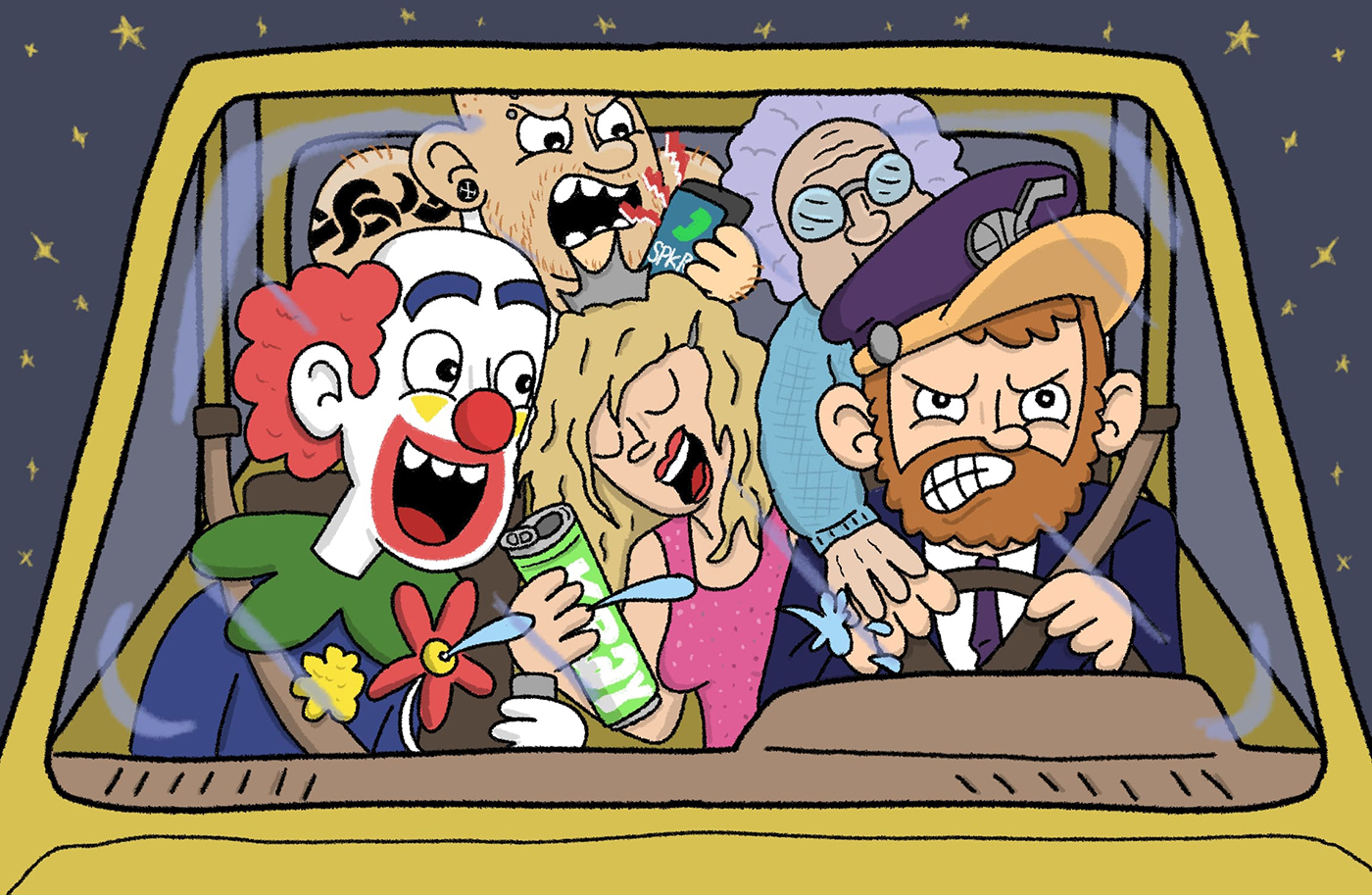 Once upon a time in a land not far away, I was an Uber driver. I had gotten fired from a bartending job (which seems to happen to me a lot), and my doctor told me I shouldn’t drink for a while. My reliable VW Jetta was paid off, so all things considered, matters made it so that I would sign up for a job where being sober was probably an important component.

First things first, I had to pass a background check. This part was easy—a little too easy, as I would come to find out how many creepy Uber drivers there are. I pride myself in not being a creep, but wow, some of the shit I heard about other drivers from customers I would pick up? I’d never take an Uber without a can of mace discreetly hidden in my sock these days.

“This part was easy—a little too easy, as I would come to find out how many creepy Uber drivers there are.”

Overall, the job is kind of fun. I don’t like people, but I like talking to people. I don’t know if that makes sense or not, but that’s just how I am. I would always politely greet the passenger upon pickup, but I would rarely start a conversation. I understand when you want your driver to just shut the fuck up. Not everyone cares about how awesome my cat is. But I would engage in verbal exchanges when initiated by said passenger.

I would refrain from talking politics and religion—those topics never go over well with strangers. I was actually driving the night 45 got elected. I figured, “It’s Tuesday, and people will be drinking. I should make some money, right?” What a sad, strange night indeed. One thing that I learned, though, is no matter our differences as people, everyone likes to talk about the weather. You can always talk about the weather with people. I truly believe that if we just talked about the weather with our perceived enemies, we could curtail our petty differences and create world peace that way.

The most common question I would get asked was if anyone had ever puked in my car. The answer was no. I always kept puke bags in my car just in case, and I did have a couple trips where the customer politely asked me to pull over so they could fertilize a flower bed with their vomit, which is fine—I’ve been there. But I’ve worked in bars long enough to know that if you are so drunk that you’d be willing to puke in a stranger’s car, well, you’re not getting in mine. And let me make it clear: Yes, when you order an Uber, you are paying for a service, but it’s still not your fucking car, so don’t fuck with the stereo, and if the driver asks you not to eat in the car, just fucking don’t.

“I truly believe that if we just talked about the weather with our perceived enemies, we could curtail our petty differences and create world peace that way.”

If I got a request to pick someone up from the bar at 1:30 a.m., nine times out of 10, that customer would be a hard pass for me. I don’t care how lucrative the trip may be, picking up your drunk ass and having to smell you and worry about puke just wasn’t worth it. So, I would follow through with the request, watch a drunk person stumble up to my car, and if they appeared too intoxicated, I’d just drive off and cancel the ride. Fuck them. I never got in trouble once from Uber for driving off without a customer. So yeah, no one ever puked in my car—I wouldn’t let it get close to that point.

I would also get asked for drugs a lot. No, most Uber drivers won’t sell you drugs. I bet some do, though. I did have a junkie in my car once who, when I picked him up, asked me to take him to a no-tell Motel, instructed me to wait 10 minutes while he would hop into a motel room real quick and then have me take him and his girlie somewhere else. I may have been born yesterday, but I would’ve stayed up all night. I took him to his motel of choice, watched him go into a room and sped off trying not to run over anyone in the parking lot.

But that wasn’t the norm. To and from the airport was a popular routine. So was taking idiots to Park City. I would end up in Park City a lot. Uber driving just gave me more reasons to not like that city even more. I wouldn’t go near that place during Sundance; plus, the Jetta wasn’t the most fun vehicle to operate in the snow.

“I never got in trouble once from Uber for driving off without a customer.”

Overall, the Uber job is pretty harsh on the drivers, so be nice to them. Sure, it’s awesome to be able to drive and make some scratch whenever you want. The flexibility is the best part; you’re never late for work. But after you factor in gas and maintenance, the money isn’t very good at all. The most money I ever made Uber driving was when I got sideswiped by a Lyft driver, and we both had customers in our cars. I won the insurance claim, thus making $2,800 in one night. Of course, I didn’t get my car fixed up and spent the money on video games and whiskey. That was a great summer.