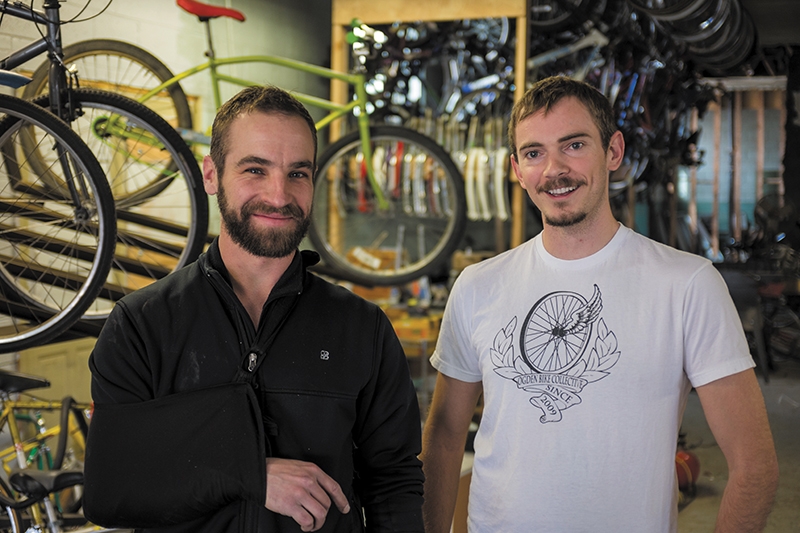 Secondhand Soul: The Story of the Ogden Bicycle Collective

Nestled in an unassuming neighborhood of single-story bungalows on Ogden’s east side sits a low-level brick building with stunning views of Mt. Ogden and the Wasatch Front. This is the new home of The Ogden Bicycle Collective (OBC), located on the quiet corner of 936 E. and 28th Street. The location is just blocks from the bustling trailheads of 27th Street and 29th Street, where members of the vibrant mountain bike community congregate spring through fall. There are also road cyclists who pass through the wide streets on their way toward the dedicated bike lanes of downtown Ogden. The employees and volunteers have a grand vision that, one day, this will become a hub of activity within the bike community and a melting pot for all types of riders.

“We are just like a bike shop in a lot of ways,” says Clint Watson, Director of the OBC. “We sell refurbished bikes, we help fix bikes, and we have store hours. But we do differ because we aim our services at economically disadvantaged communities.” As with other collectives, the overarching goal of these nonprofits is to provide access to bikes, maintenance and repair by making it as affordable as possible. Bicycles are a symbol of independence that enables their user to lead a more productive life by serving as a transportation and fitness tool. Two of the main demographics that the OBC serves are children from low-income families and the homeless. Established in 2009, the OBC has worked directly with these communities by delivering various programs aimed at allowing individuals to develop a sense of ownership for the bikes they obtain. “We don’t do repairs for you; we teach you and empower you to maintain your own bike,” says Watson.

Founder Josh Jones and a small group of mechanics and volunteers laid the initial groundwork that would become the foundation of the OBC. Their original programming was done in earnest, but they needed a more focused sense of direction to make the leap toward sustainability. In 2010, OBC volunteer and former Shop Manager Dustin Eskelson was a fervent road bike racer looking at a way to become more involved in the cycling community. “I saw working for the Collective as a way toward self-improvement,” says Eskelson. He logged 20–30 hours a week for the OBC as a “stellar volunteer” on top of his full-time job. By April 2013, he was promoted to Shop Manager and helped establish clear expectations for the OBC to become more organized. However, in an unforeseen turn of events, the OBC was asked to leave their space on Wall Avenue in Ogden. Without a home, the proverbial wrench in the spokes brought them to a grinding halt. Undeterred, the staff searched far and wide for a new space to get up and running again. “It was kind of a bittersweet relocation,” says Eskelson.

Seeing the potential in a dilapidated, abandoned building in east Ogden, the OBC moved forward and was able to purchase the current property outright. In December 2013, the OBC took ownership and began the long road toward establishing their presence in a new neighborhood. The space between the walls had been completely gutted by tweakers who stole the copper wiring and piping. “We moved in and knew we had thousands of small projects [to do] to get the place habitable,” says Eskelson. The Ogden community—including numerous businesses and individuals—immediately stepped up to assist in donating materials for renovation and volunteering many labor hours to complete the myriad projects set before them. Now, the building sports a new roof donated by Kendrick Brothers Roofing. The volunteers also replaced every window, the gas line and doors. Currently, they are hustling to complete the build-out, which includes store space, six DIY workbenches, a classroom and a bike wash.

“Buying a building and hiring a full-time Director are the biggest changes the Collective had undergone since inception,” says Watson. In March of 2015, Watson was brought on to oversee the final stages of renovation and has led the OBC into a new era. His roots in the cycling community run deep. A Utah native, Watson served on the Salt Lake City Bicycle Collective Board of Directors during the early 2000s while he was a student at the University of Utah. His tenure lasted nearly a decade before he was hired as the Programming and Volunteer Director of the Boise Bicycle Project in 2012. He continued to hone his skills in the nonprofit bike world and was eventually enticed to return as Director of OBC.

With Watson at the helm and Eskelson contributing several hours a week as a volunteer, the OBC has a lot in store for the remainder of the year. They are organizing a bike/gear swap on May 2, and on May 30, they will be sponsoring a children’s bike giveaway. They aim to give away 100 bikes to deserving kids from the Ogden community. In 2013, the OBC donated 400 bicycles to children from around the area—this year, they hope to increase that number to 500.

Additional programs will include Earn-a-Bike, where local George Washington High School students spend six weeks working on a bicycle that will become theirs to keep. The OBC will also be donating “goodwill” bikes to other adults, refugees and veterans from the community. These initiatives are funded nearly 50 percent by sales from their shop, another 25 percent from events and fundraisers, and the final 25 percent from donations and grants. Volunteerism is of course the backbone of any bicycle collective, and Watson encourages people to get involved by visiting OgdenBikeCollective.org for more info. The wheels are turning quickly now over at the OBC, and its future is looking bright.