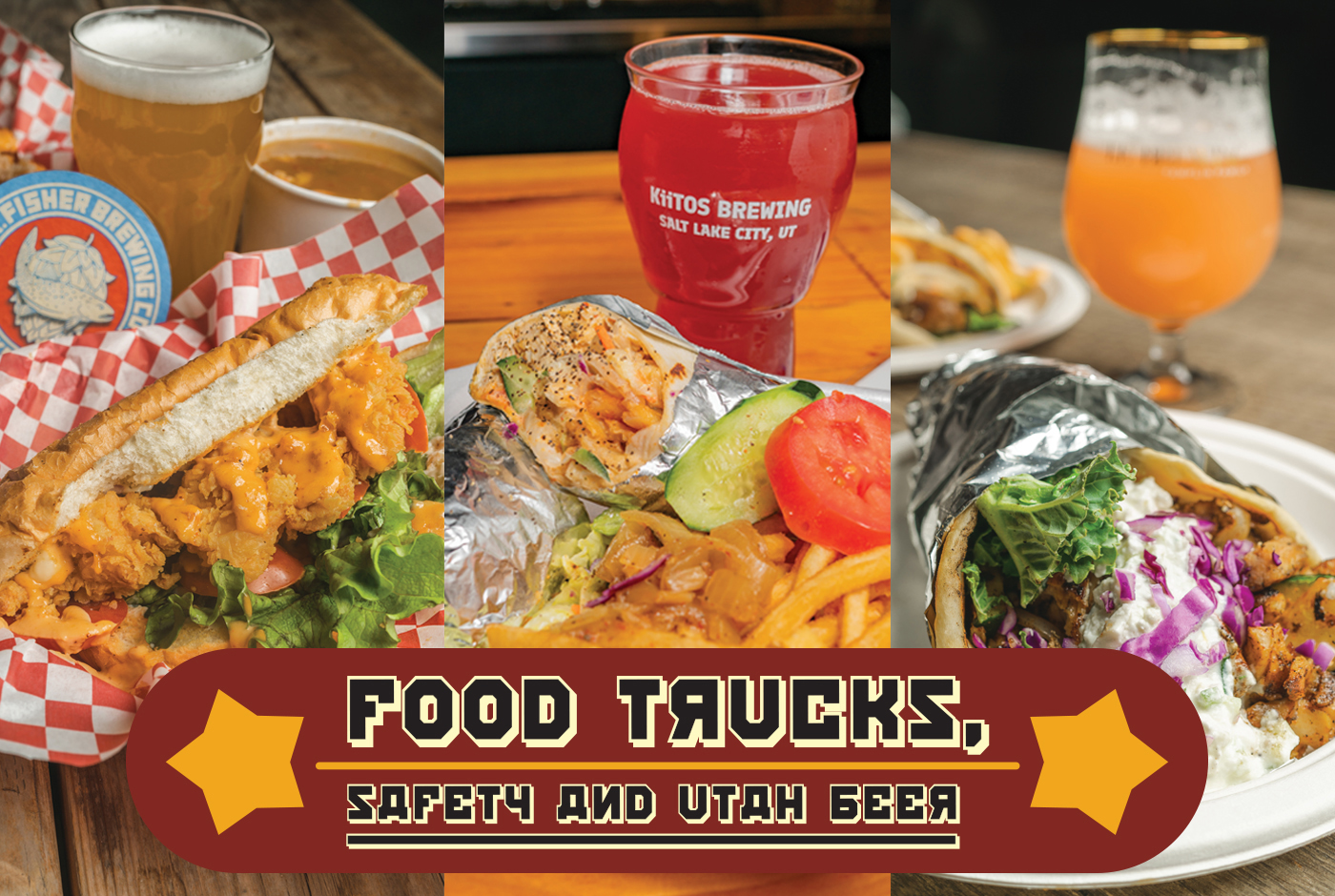 Because of this garbage virus, many of our alcohol-dispensing institutions have had to overhaul their entire business models in order to comply with city and state regulations. In the before time, Salt Lakers would spend a fair amount of time within the taprooms of Fisher Brewing, Kiitos Brewing and Templin Family (T.F.) Brewing. These establishments have also become the safest places to do a beer run and grab a bite, as they all rotate food trucks out of their respective parking lots and offer outdoor, curbside service. These businesses collectively participate in the organic warmth that is the flavor of our city, and aren’t backing down as long as we do our part in supporting them. Go catch ’em all! (Just not the COVID-19.)

What’s most entrepreneurially captivating about the team at Fisher Brewing Co. is that their theme packages itself into a concept made original on their own terms. It’s in the firsthand experience of visiting Fisher that you understand the foundation the brewery was built upon. Instead of going commercial, these are brewers who selectively choose what they want to brew and rotate the brand internally on a weekly basis. Fisher is the only place you’re bound to find Fisher beer, and they proudly host a monthly calendar featuring every and all of the best food trucks accommodating our city, among them the food truck Taste of Louisiana.

As much as I wanted to see a crawfish boil coming out of this food truck, options are instead the deep-fried Shrimp Po-Boys, collard greens and gumbo made on the spot. But in particular, frog legs on special jazzed these teeth like piano keys. The Po-Boy carries its own weight in gold, and the fried outer skin on the shrimp (also just about everything else) encourages us to eat toward the indulgent side of fat intake for the week. Moreover, Taste of Louisiana is incapable of over/undercooking the devious collard greens, because they’re perfect. These suckers are tender and deliver an umami that contrasts the fatty fried foods, carbs from rice and overall protein intake that sausage/shrimp gumbo throw at you. Throw that cocktail and fry sauce on everything and then give Taste of Louisiana a pat on the back. Their list of sold-out items as the line gets bigger is only promising!

When speaking praises for T.F. (Templin Family Brewing), we first give due respect to Kevin Templin, who stemmed this family brewery from his time shaping the master legacy that Red Rock Brewery has established throughout the years as their former Head Brewer.

Aside from specialty, barrel-aged fermentation and recreating an offshoot from this city’s double IPA scene, T.F. also pursues sours and light beers paired with a rotation of local food trucks. Tonight, we hit the Komrades food truck, who provide a selection of to-order Eastern European–inspired pita pockets ($8–10). I use the entire menu by substituting their shredded pork for the Greek chicken on the El Capitan. What makes this one great is how the meat is grilled perfectly alongside onions and zucchini. Komrades decided it is also appropriate to make a Banh Mi out of pita. Pickled daikon and carrots will fix all problems, and the coconut curry marinade rules either way. For what it’s worth, T.F. also frequently produces special-release beers, one of which is brewed yearly with a special “4:20” emphasis and limited glassware to match.

As we continue to blaze trails in these times of quarantine, buying curbside beer and/or supporting T.F. in any way is one of the many ways Utahns can nurture and revive our vulnerable service industry. By showing breweries like T.F. that we care about them, we can ensure that they’ll be sticking around for much longer.

Kiitos Brewing has made a name for themselves as one of Utah’s most accepted new breweries.  Specializing in blackberry sours and a line of New England–style IPA’s, another one people look out for every year is their—very pink—Big Gay Ale. Kiitos’ tap room, which is just a year younger than the brewery itself, offers a spacious communal sitting area and an impressive row of vintage pinball machines to keep the fun flowing all night long!

We especially like to come around the brewery on Thursday, Friday and Saturday evenings to check out their rotating selection of food trucks. Tonight, we belly up to Balabé, one of the city’s Senegalese eating establishments with everything priced within the $13 range, and we pick the Dakar chicken shawarma wrap. Served inside a warm pita, this wrap is also filled with grilled onion and zucchini, with a zesty drizzle of spiced-up aioli. We pick their Kaolack Brochette as a side, which are skewers of grilled chicken, plantains, onions, tomatoes and bell peppers. The bottom line with Balabé is that they deliver a perfect char flavor to everything they touch. During the rest of the week, Kiitos offers a modest assortment of burritos, chips, guacamole and salsas to order ($4–6).

The word “kiitos” translates in Finnish as a simple word for gratitude —Thanks! Now more than ever, we should be helping each other out and saying Kiitos!