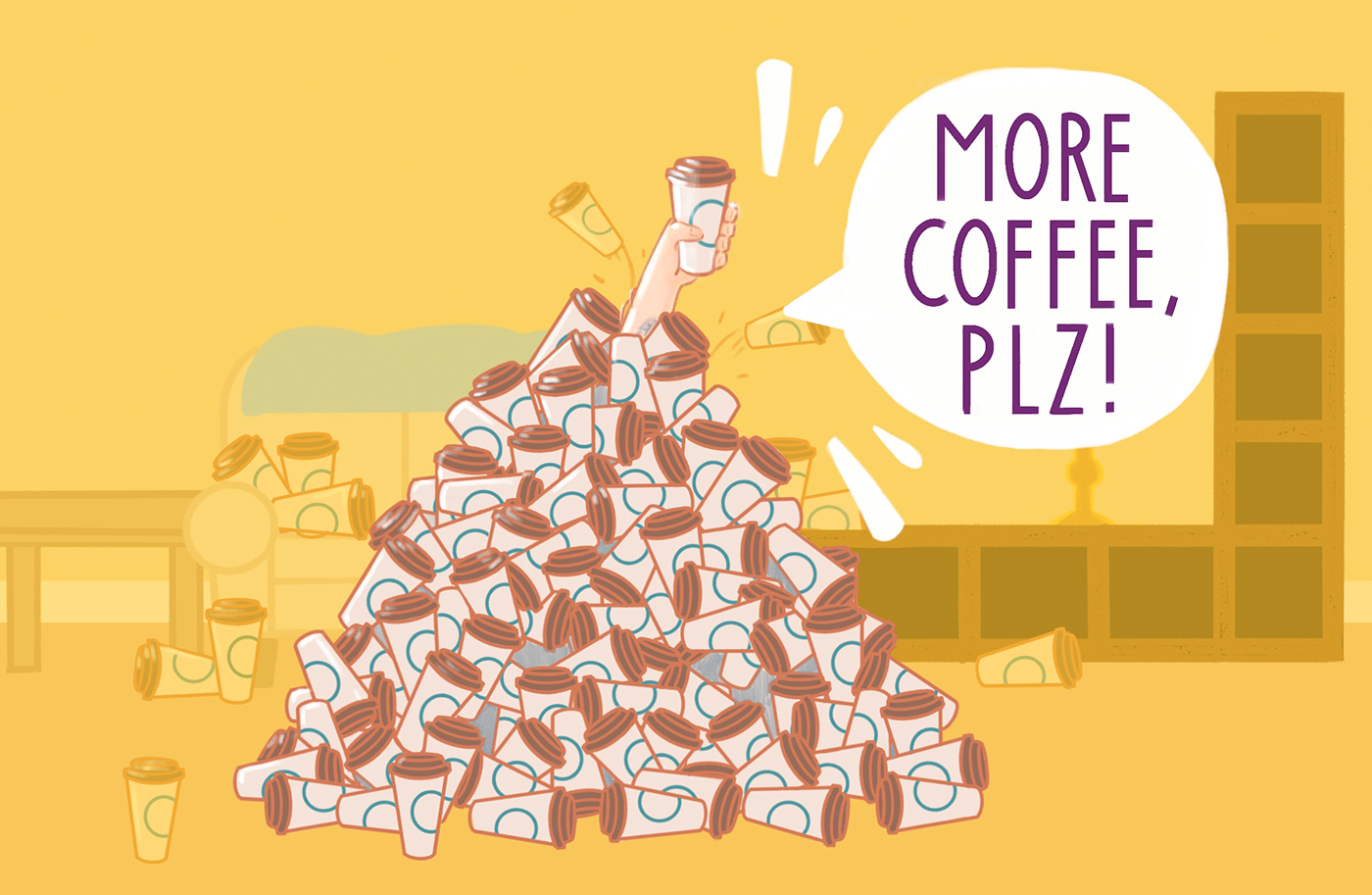 Mmm, coffee! As we navigate the depths of winter and most of our futures are uncertain to some cold degree, let us take a moment to celebrate the simple things that warm our bones and souls on a daily basis. Today, I celebrate coffee, as I do pretty much every day.

Here is a short list of reasons why I love coffee:

Nothing brings my bowels to attention quite like the blissful aroma of a dark and hearty brew. If coffee enemas ever become a thing, I’ll be first in line [Ed: They are. Queue up.].

Side note while on this topic: while doing half-assed internet research for this article, I came across something interesting. The most expensive cups of coffee served around the world are brewed from coffee beans that have been shit out by other animals, such as elephants and civets (a cat-like creature). You would think this type of brewing would be called the French press, but it’s not and is considered a delicacy. I would love to try this. Drinking something made from poo that would make me poo? It just seems so natural.

Next up, coffee goes well with cigarettes. Yeah, smoking is bad for you and all, but so are most enjoyable things in life. Some things were just meant to be a pair: Bonnie and Clyde, Taco Bell and diarrhea, guns and ammo, coffee and cigarettes.

“I have no idea how a sit-down coffee shop makes any money.”

For as much as I love coffee, I really don’t like coffee shops all that much. I’ll still pop in and grab a brew from some of my favorite local, independent businesses, but I don’t like hanging out in an obtuse den of social non-interaction or a breeding ground of bad poetry and terrible screenplays.

I have no idea how a sit-down coffee shop makes any money. Your average customer seems to spend only $4 to sit down and use your internet for six hours. The business model seems vulnerable, that is, unless you have the best coffee in the world.

Drive-through coffee seems to be the business model to follow if you want to make any real paper in the coffee game. Lines of cars in and out all day every day—it’s where Karen gets her start for the morning, easily able to berate a barista while deciding who to socially injustice next in between sips of some impossible-to-pronounce latté variation with way too much syrup in it.

One time while I was on tour with Fuck the Informer—a local punk band at the time—we were in San Francisco, and our friend we were crashing with asked us if we wanted the best cup of coffee in the world with the stipulation that we would have to wait at least 45 minutes. We were a young, impatient bunch of degenerates, but the world’s best coffee sounded enticing. Though, it also sounded like a bluff our friend was presenting. The shop was called Philz Coffee, and fuck me sideways—it was the best cup of coffee I think I’ve ever had. And yes, we did have to wait almost an hour, but it probably was made from the aforementioned elephant poo—it was that fucking good.

“How can I make my coffee better? Simple: Just add liquor.”

Somewhere along the line of coffee evolution, some genius figured out that putting liquor in coffee makes it better. They were probably Irish, hence the world-famous Irish coffee, the cause and cure of many a hangover. Adding liquor to many beverages enhances them. For example, try putting Rumple Minze in your orange juice, or try putting some gin in a glass of warm milk. And shit, we all know you can just throw vodka in anything and call it a good time. Whiskey, brandy and St-Germain all pair well with your morning cup of joe. Drinking coffee with your booze in the morning decreases your alcoholic factor a couple of notches, for sure.

Anyway, coffee is great, and I hope you all get to drink some today!