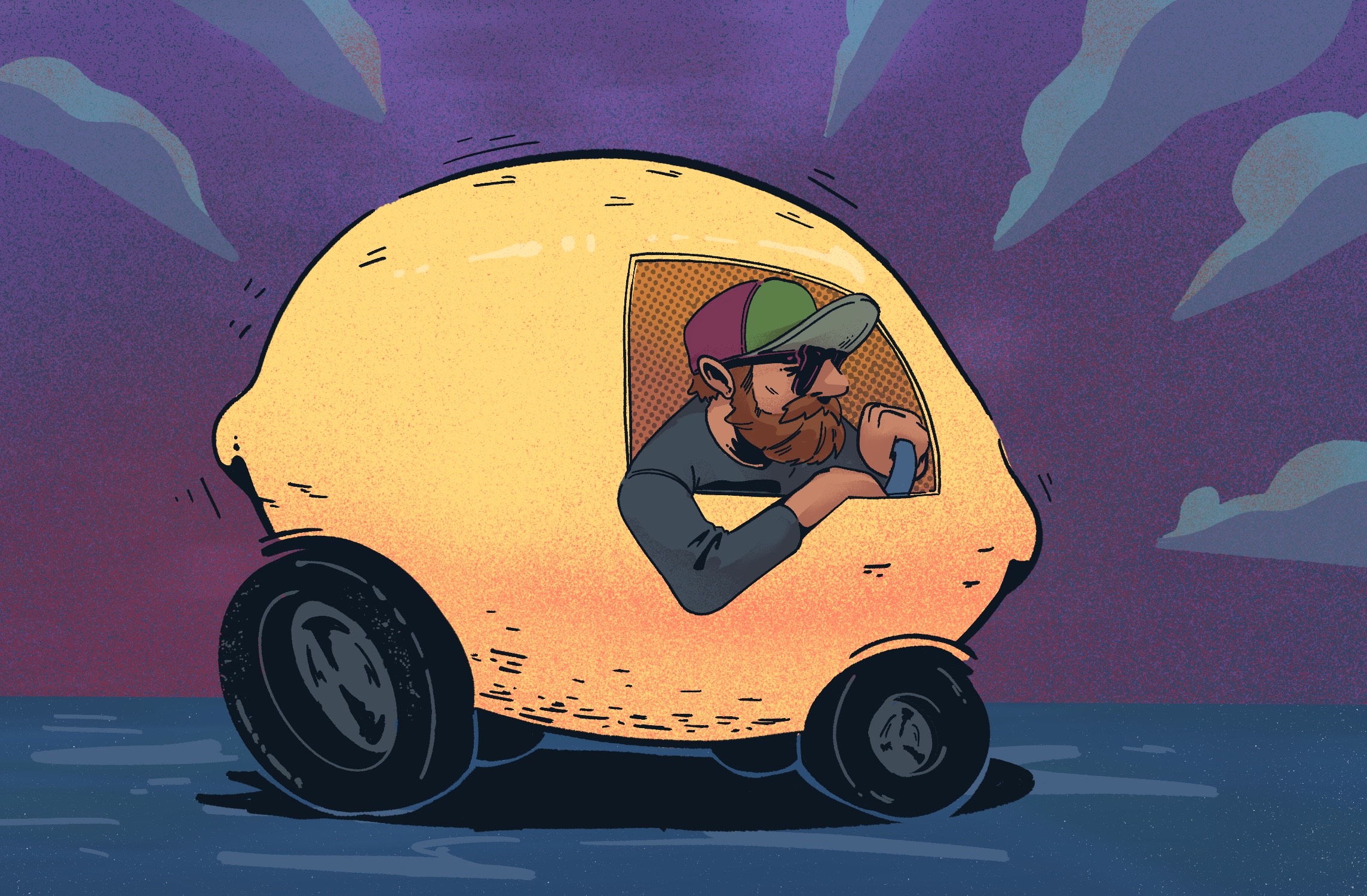 Last month, my trusty, paid-off chariot of steel and aluminum—aka my 2006 Volkswagen Jetta—was egregiously sideswiped, thus resulting in a total loss. Luckily, I was not in my vehicle, as it was parked legally downtown in front of my apartment, and I didn’t see or hear the accident. I went to get into my car a few hours after said incident to find the driver’s side completely smashed with a citation note from the police on the windshield stating what happened and that there was no need to call them back because it was now deemed a civil matter.

Oh well. It’s not like I had a job to be late for anyway. According to the police report, a Dodge Caravan, aka a Utah County Assault Vehicle, piloted by an 18-year-old was responsible for said damages. Thankfully and to their credit, they didn’t drive off.

It was time for a new set of wheels anyway, although I did love that Jetta. And what better way to escape quarantine than go shopping for used cars? Well, actually there’s a lot of things that would be better, but this is what I was working with, so time to just stay positive and not let 2020 get the best of me.

Thus begins the haggling with their insurance company. This can be seen as a bit stressful, but again staying positive, I relished in the fact that I would get to take some aggression out over the phone by yelling at insurance agents over the value of my totaled car. I actually ended up haggling over a vehicle I would never drive again with some douche over the phone versus haggling with a shady used-car salesman.

“Although it sucked at first, my car getting totaled has turned out to be the best thing to happen to me in 2020.”

After spending hours and hours of not looking at pornography on a digital device, instead sifting through oodles of used-car listings, I finally started making my way to the dealerships. The first thing I learned while visiting dealerships is that if this year has got you feeling down and your positive mental health is in question, you should just go visit a car dealership—even if you don’t need to buy a car. It’s the car salesman’s job to make you feel special. So go take some test drives to get that personal affirmation you desperately need. Even the shady salesmen will stroke your fragile ego into a shitty APR. Just don’t buy a car—just get the free coffee and positive reinforcement you desire.

Car shopping does kind of suck, though, especially if you are a boy like me who doesn’t know about “manly” stuff like cars. I can’t throw a spiral or turn a wrench. I know how to use a hammer but only for smashing inanimate objects. So I started taking used cars by my mechanic to tell me if I was buying a piece of shit or not. And I put it like that—I asked my mechanic if I could bring by cars for him to look at and tell me if they were a piece of shit or not. I brought by a total of four pieces of shit before starting to feel a bit embarrassed.

I realized that I needed to refine my car-search methods and took some advice from my mechanic, which was to skip the dealerships all together. I started thinking what was actually important to me in a vehicle. Like, does the AC work? Good tires? What won’t get me pulled over, and if so, what model of car would pair well with a mugshot? Will my new car have enough trunk space to live out of once the impending housing crisis hits?

“I realized that I needed to refine my car-search methods and took some advice from my mechanic, which was to skip the dealerships all together.”

But mostly, I was working within a specific price range while looking for cars. Car loans are at an all-time low as far as interest rates are concerned. Too bad you can’t use your unemployment CARES Act benefits as a reference for qualifying for a low APR. So scratch that plan.

I was driving a Kia that the rental car company gave me, and I hated that thing. It lacked the vroom-vroom I was missing, and even though they sponsor my favorite socially conscious corporation, the NBA, a Kia was way too dorky and out of the question.

At first, I wasn’t particularly hip on buying another German car after one of my friends made Hitler jokes that made me feel self-conscious. But as fate would have it, I found another German car. I got lucky and found a couple who got pregnant and had to get rid of their VW Beetle because of its inability to fit a child car seat. So I mostly bought the car as another form of protection from me having a baby. And I got a sweet deal on it. I don’t really need a back seat anyway—it’s better not having to give your friends rides anywhere or be the designated driver.

But yeah, although it sucked at first, my car getting totaled has turned out to be the best thing to happen to me in 2020. Who would have thought? I was able to get a massive upgrade at a reasonable price, and I now understand why people commit insurance fraud, though there was no fraud committed in this transaction. As long as I don’t get the ’Rona from test-driving pieces of shit, things should be all right. Vroom-vroom!