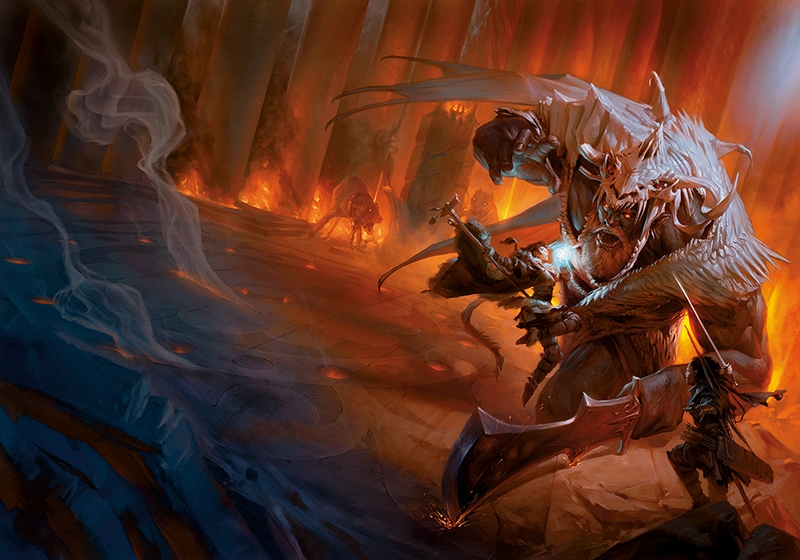 D&D Fifth Edition simplifies combat math, letting your players focus on how awesome it's going to be when they slay the Dragon-skin-cloak–wearing Fire Giant king. Photo: © 2015 Wizards. All Rights Reserved

I remember the day I jumped ship on Dungeons & Dragons. My play group was six months into a 4th Edition campaign I had elaborately designed from the ground up. Some of my favorite sessions of D&D took place during those six months, from an intimate three-player stealth mission through an ancient arcane library to a massive 11-player skirmish between my players and a tribe of swamp-dwelling Kuo-Toa. I was having a blast coming up with the concepts, meticulously planning every encounter and coming up with exotic locations to explore with my players.

Then everyone just got bored.

Dice that were once rolled with eager anticipation now fell diffidently onto the table. The excitement of the campaign went sour. It seemed like more people couldn’t make it to the table every week, until I rolled up my mat, shelved my divider and ended the group. For a long time after that, it seemed like every time we gamed, our group was pointing out the numerous flaws in 4th Edition, from the linear combat system to the tepid character creation system.

A couple of years later, I heard people talking about D&D Next, a playtest for the upcoming Fifth Edition of D&D. I was skeptical, to say the least. I made a couple of characters and rolled in an introductory adventure, but still didn’t feel the magic that had sucked me in with D&D 3.5.

Then I got a chance to flip through the finished Player’s Handbook. As I started flipping through the pages, I felt a well of excitement flooding back. Sometimes it’s the little things that spark your imagination. I kept finding myself lost in the artwork, which hearkened back to the high fantasy style I had grown to love in previous versions of the game. While 4th Edition’s art was colorful and chaotic, reminiscent of the maximalist character designs in World of Warcraft, Fifth Edition’s art has the patient beauty of old-school high adventure, amped up with a distinctly modern aesthetic. Everything has this magnificent watercolor texture that, while obviously digital in most cases, gives each piece a familiar, knowable feel. Even the costume design is very old-school, but with a wide color palette that goes far beyond the dusty browns of D&D 3.5.

Taking things one step further, the character designs are way more diverse this time around. D&D has always had a distinctly Medieval European fantasy aesthetic, but this time around there are ample examples of African, Middle-Eastern and Asian designs. This design choice adds a depth and richness that inspires players to be more creative in coming up with character concepts, which is a huge step up for D&D. As a Dungeon Master, I find myself poring over these designs and imagining where these characters come from, what their cultures are like and—most importantly—how I can take my players there.

As for the system itself, setting up an adventure and building a character has never been this easy—at least, not in Dungeons & Dragons. The races feel a little more varied this time around, featuring new sub-race options that give you more control over your character’s attitude and build. I didn’t feel like any race was unduly pidgeonholed into one class or another, and the features each race can get work for a broad variety of different characters. They even found a way to balance out the Drow in a way that makes sense to a new player.

Classes are deeper now, with more meaningful customization options and a more modest progression. Multiclassing is still available, but it seems like the development team has found a way to balance the overpowered multiclassing opportunities of D&D 3.5 while avoiding the convoluted clusterfuck that was multiclassing in 4th Edition. In most cases, you’ll want to stick to your starting class, but there are some interesting multiclass builds that I certainly want to try out.

My favorite addition to the character creation process is the new Background system. This randomly-generated feature nets your character a couple of skill proficiencies, some gear and a Background Feature that aids you in your exlpoits in the story. You also determine what significant events happened in their past, their Bond to the world of the story, their Ideals and their fatal Flaw. All together, you have created something far more engaging than “Snooty Paladin #9999,” and even if they are a snooty paladin, at least you know why!

Every time I went through character creation, I wanted to make another, just to see what kind of character I would roll up next. I haven’t felt like that since D&D 3.5. It still takes about 15-30 minutes total to get a character on the page, but that’s easily the shortest amount of time that I have ever spent on a single character in any D&D system.

The one thing I already hear people complaining about is the “removal” of Feats. Hear me out, guys. Feats, by far, were the most annoying part of the game for new players. As a DM, I constantly had to counsel my players on feat options, and the sheer scope of available feats gave the new faces at my table a bad case of analysis paralysis. In D&D 3.5, seasoned players could tinker endlessly with overpowered, feat-driven character builds that were frankly not very fun to have in the party. 4th Edition tried to curtail this issue by making the Feat system all but vestigial, removing anything powerful enough to be worth consideration—a decision that made choosing feats feel boring and unnecessary. Fifth Edition makes feats an optional feature, which I am perfectly fine with. It de-clutters the game and removes the incentive to try and break system mechanics. Some might disagree, but I find that the loudest complaints come from the most egregious power-gamers I know. I’d rather make the game fun for everyone at the table, and feats were most often the vehicle for turning a game about teamwork into one player’s power fantasy.

Going beyond the character generation system, it feels like the whole experience has been gently tweaked in favor of making encounters fluid and story-rich. Now, instead of groaning inwardly when my players ignore my plot hooks, I feel like I can cook up something fun for them to do on the fly. Much of the unnecessary algebra has been removed from the DMing experience, replaced instead with an Advantage/Disadvantage system that is both flexible and statistically relevant. Normally, you roll 1d20 to resolve an attack, skill check or saving throw. However, when the odds are in your favor, the DM can choose to give you Advantage, which allows you to roll 2d20 and keep the higher number. Pretty cool, right? The DM can also give you Disadvantage, which works exactly the way you’d expect—roll 2d20 and take the lower roll. Gone are the temporary -2 attack penalties and conditional +2 AC cover modifiers of yesteryear. I find my players getting more and more creative in the way they approach encounters because they are no longer cynically trying to squeeze every +1 they can out of every scenario. With Fifth Edition, they know that creative ideas in combat don’t mean flipping through the rulebook for 15 minutes, and as any seasoned DM knows, the longer you can stay out of the book, the faster and more fun combat will be.

If you’re looking for a hardcore RPG to test your skills at optimizing characters and crunching numbers, I regret to inform you that Fifth Edition might not be your cup of tea. This edition is heavy on story and keeps the mechanics fast and loose, so there’s not too many opportunities to abuse the system, which I understand can be a bit of a downside for some. However, I’m loving how streamlined and clean my encounters feel in this edition. Anything that can get all of my players engaged and roleplaying all at once is worth the effort, and keeps me excited about thinking up grand new worlds to explore.

All told, Fifth Edition is a compelling reason to get excited about D&D again, even though it’s not as complex as it used to be. While some will welcome the simplicity, I fully expect that plenty of people will stick to whatever system suits them best. However, this edition is easily my favorite, ranking even higher than D&D 3.5, my first love in D&D. If you’re just getting started and want to try it out, you can download a free PDF of the Basic Rules!

Check out SLUGMag.com next week for Part Two of this trilogy, where I will cover the Monster Manual and the myriad horrors that dwell within!