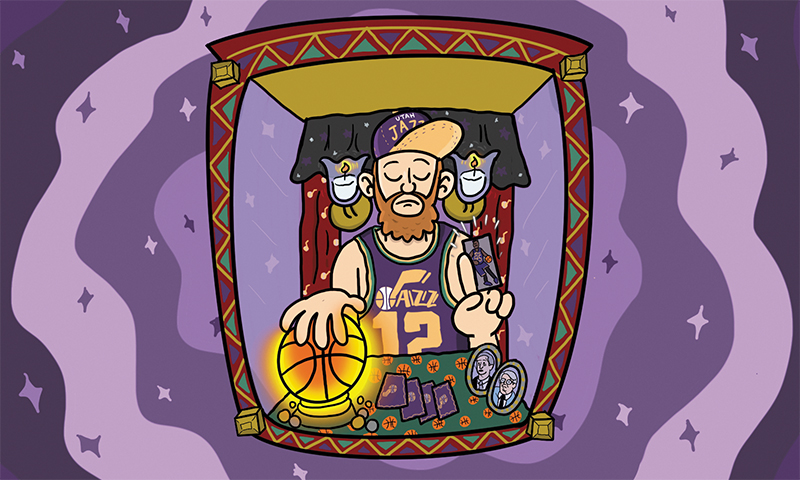 The air is getting crisper, the days are getting shorter, the famous Salt Lake inversion is looming (thanks a lot vape-users), and the chlorophyll is draining out of tree leaves, leaving them dead and useless all over your lawn. For most of you, this means fall is approaching, but for me and several other dorks who spend way too much time listening to sports-talk radio, this only really means one thing: It’s time for some Utah Jazz basketball!

Once again, I shall make my season predictions for the 2019–20 run. Not to humble-brag—because that term is an oxymoron—but I got four of my predictions right in my article for last season. For example: I predicted that Alec Burks would get traded; he did. I predicted that Rudy Gobert would remain tall; he did. I predicted that Dante Exum would get hurt; he did [Editor’s note: Mike Brown technically predicted that Exum would break in half and spontaneously combust, which technically didn’t happen]. And I wrote about white nationalists in the arena, and, lo and behold, some MAGA douchebag fan did get banned for life for using racial epithets toward Russell Westbrook. Overall, SportsCenter should just hire me now.

Now, there is a ton of hype about this Jazz team this year. There were many trades made to improve the team, some a little too good to be true, if you know what I mean. So my first (retroactive) prediction is that Jazz Executive Vice President of Basketball Operations Dennis Lindsey reverted to old-school mafia tactics to make this happen—paying cold, hard cash to a couple of wise guys named Bruno and Luca, threatening to firebomb the cars of other general managers and agents or to pay former Jazzmen as strong-arm infiltrators to make this happen. Maybe nothing that violent, but how the team got put together this year does appear a bit shady to me. They will be winning a lot of games, though, so fuck it. I’ve questioned Lindsey in the past, and out of fear for my kneecaps, I won’t do it again.

Stay in the Suburbs, Plastic People!

With the teams’ improvement and many among the national media agreeing that the Jazz could make the finals this year, out come the fair-weather fans. You know the ones I’m talking about. Season tickets are sold out this year. That’s nice and all, but I want to take a minute to say fuck you to these people (I don’t even like calling them fans)—you know who you are. I’ve been going to Jazz games since I was 9. I was still going when Ty Corbin coached the team and they would literally blast that song “Stand By Me” through the arena after another spectacular loss. If that doesn’t show dedication, I don’t know what will.

So my prediction is that all the fair-weather fans will show up to every game late because P.F. Chang’s was too crowded before the game, drink all the newly available craft beer at the arena, be late for the start of the third quarter, give half of their season tickets away to their clients who don’t give a shit about basketball, either, leave the game early and buy a Donovan Mitchell jersey. I have a feeling I’m going to nail this one.

Coke, Shit and A Beautiful Mind

This prediction is happy and I hope it does come true: Jerry Sloan gets a statue outside the arena. But it’s bigger than John’s and Karl’s statues and is just him shoving a ref or Jerry Stackhouse. It shall be made out of bronze and engraved with all of Sloan’s favorite swearwords he’s gracefully articulated over the years—words like “motherfucker,” which I think is his favorite, “son of a bitch” and “lying-ass ref,” among many other unmentionable phrases.

Coach Quinn Snyder’s coke dealer will get arrested this season, thus triggering a mental breakdown with his inability to self-medicate. All of Snyder’s clipboards will then look like that cork board with all the crazy shit on it from the movie A Beautiful Mind, and he’ll fire all assistant coaches and let the voices in his head fill their previous roles. Most players will be confused and hate this, but Gobert will love his new role as point guard.

The ghost of Hot Rod Hundley will haunt the arena this year. I predict that he possesses play-by-play announcer David Locke mid-game, thus making Ron Boone shit his pants. Ron will proceed to call the game in the same shitty way he always does like nothing happened and with his pants full of poop. An exorcism will be performed by the great Frank Layden mid–third quarter. Then Locke will quit for the season to focus on his podcast.

And there you have it. I hope you all have a great season, and go Jazz!