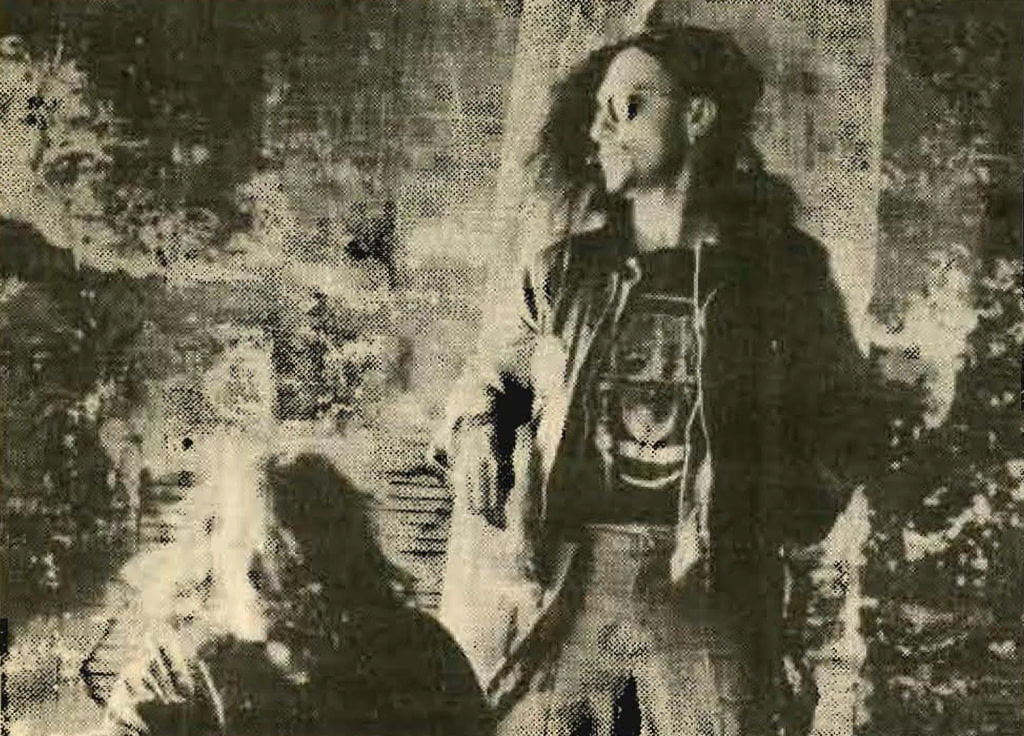 Al Jourgensen is the leader of an international group of industrial terrorists—nine musicians from God only knows how many bands, all on stage as Ministry.

By Matt the Lads and Barbara the Photo Queen
March 6, 1990

The mind may be a terrible thing to taste, but you should chew on a mouthful of Al Jourgensen’s sometime. This man is the leader of an international group of industrial terrorists—nine musicians from God only knows how many bands, all on stage as Ministry. They’re out to take the world hostage. Reviewing Ministry is like commenting on 20 or 30 bands at the same time—Jourgensen alone being in 11.

The set opened with about 15 minutes of synthesizers and voices: an exploration of the mind in operation. This also served to work the audience into a frenzy, barely controllable when the band finally came on stage. The crowd was yelling obscenities at the band 10 minutes before they took the stage, and it only escalated from there. The stage was surrounded by a chain-link fence. Jolly Roger, the tour manager, told us that was for the safety of the audience, not the band. But even the fence didn’t stop Jourgensen and the band from hurling a barrage of insults, beer and spit at the crowd as they tore their way through a set of songs from Ministry, Pailhead, Skinny Puppy and Revolting Cocks. Before the first song was over, Jourgensen had hit potential fence climbers with the microphone stand and, as the show continued, the brave were kicked in the face and beaten with billy-clubs to keep them down. High energy doesn’t even begin to describe the music. Speedway had to rent a generator to supply the extra power necessary to accommodate these giants of the underground scene. This was a “Super Groupe” of alternative musical masters.

The audience didn’t seem to be familiar with Pailhead songs like “Man Should Surrender” and “No Bunny.” But thanks to Joe Kelly from Fugazi, one of many that took turns at the mic, they got closer to the music—literally. Joe spent most of the time during his numbers either on top of the audience being passed around, or stage-diving from the fence into the crowd. Ogre, from Skinny Puppy, also had his chance to perform a Skinny Puppy tune, and Chris Connelly crooned the RevCo numbers.

But Jourgensenwas the center of attention, screaming out Ministry songs with all he had in him. “Thieves,” “Breathe,” “Stigmata,” “Deity,” “Burning Inside”—all from their last two albums. Pure, unadulterated, uninhibited and dangerous. This is industrial at its most raw and aggressive. And it showed in the audience. There was a lot of movement on the floor and a lot of audience members climbing on the fence and jumping into the crowd before and after they got beat down.

Jourgensen’s got a heart though, too. He brought Paul out on stage so that the audience could embarrass the fuck out of him by singing “Happy Birthday” to him. But then it was right back to the grinding. Ministry is definitely a band to be reckoned with. As Barbara put it: “We just saw the most frightening band in the world. People fear them.” Record companies fear them, club owners fear them, but their fans love them. Spit in the face from Jourgensen is like a present from God himself.