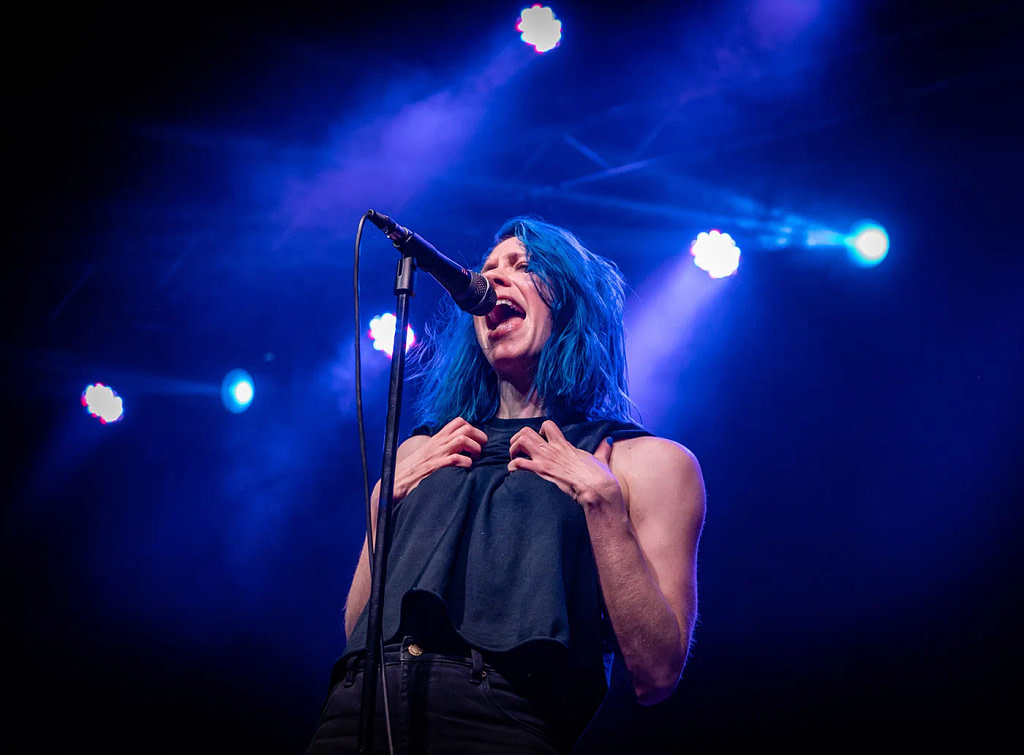 It was a cold, snowy night in Salt Lake City for K.Flay’s The Inside Voices Outside Voices Tour to land. Roads were covered with heavy, wet snow, and the whole city was filled with people seeking warmth from the flurries outside. A winter weather advisory had been issued, but that didn’t prevent it from being a sold-out show at The Complex.

The venue was slowly filling with people trickling into The Grand venue. Upon entering, there were merch booths on the side of the room and a concession stand selling snacks and drinks. Folks of all ages stood inside the separate room, dancing, singing and generally enjoying the live music.

Kid Sistr is an all-women, New-York-born indie trio, comprising Sabel on guitar, Sara Keden on bass and Rebecca Webster on drums. They covered “Sabotage” by the Beastie Boys, and the crowd loved to sing along. It was a fun time being back listening to live music after the past few years; there was high energy in the room as Kid Sistr got the crowd jamming out.

As Kid Sistr wrapped up their set, we headed up stairs to the 21+ mezzanine. Folks were grabbing drinks and rocking out above the crowd. It had a great view of the stage as K.Flay began to perform. During the opener, she announced that her and the whole team had quickly jumped on flights to make the show, leaving behind all their gear including instruments. They even had to borrow a bass from Kid Sistr, who happily obliged.

It was an intimate, authentic show despite the band not having their instruments for the tour. “Make Me Fade,” “Weirdo” and “My name isn’t Katherine” were a few of the standout songs played that evening. K.Flay delivered on her signature in-your-face energy, amplified by the frenetic slush storm surrounding the March night.