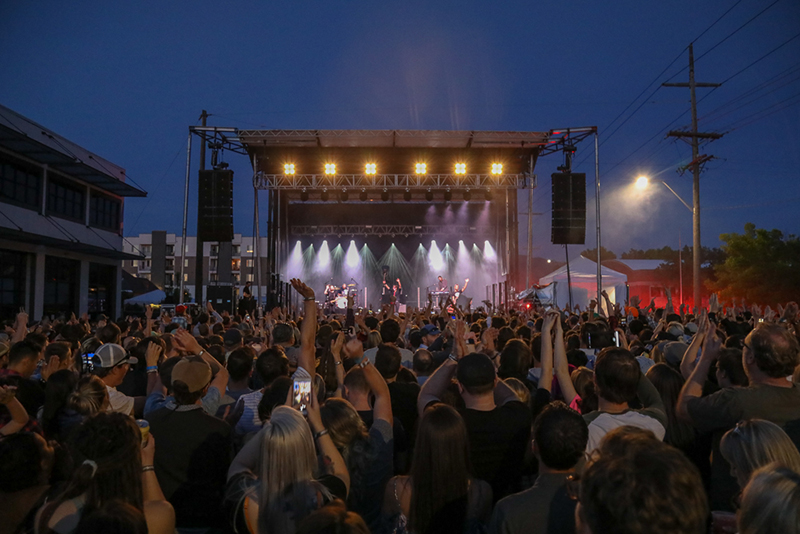 This might have been the only time this has ever happened. In baseball you’d call it pitching a perfect game. Last weekend was the concert equivalent of a perfect game. The perfect concert happened at the Kilby Court 20th Anniversary Block Party. How do I qualify this? Well, let me tell you:

Kilby Court is the soul of the local music scene. It invites the savviest of concert goers, especially those in the scene trying to catch the next big thing before they explode. It attracts concert goers who don’t need environmental bells and whistles to go with their music. It attracts the next generation of concert goers with its always all-ages policy. These people and minimalist-intuitive wonders made up the crowd on Saturday, May 11.

Generally, as you approach the mosh pit portion of a clumped audience, it smells extremely…gamey. Not on this day, though—for the time in the history of any concert I’ve ever been to, the audience smelled fantastic. This is a considerable feat, as the party featured three separate stages. There was one at the traditional Kilby Court concert area, a main stage at 700 S. and Kilby Ct. and the Spyhop stage on the far side of the event area. Until you’ve spent considerable time in a crowd having a sweaty shoulder smushed into your face, this appreciation might seem silly. But having a crowd smelling at the high end of pleasant can really relieve some general scent burdens.

“It was so nice to see the (and I quote from my notes) ‘Kick your door down with fucking rock!’ bravado of these bands.”

Running between these stages made me the odd one out on the positive hygiene scale, so I kept my distance and danced between shady spots. Even in line, the crowd impressed me. This is a sharp contrast to traditional concerts, where the audience can be a bit of a gamble. A show where everyone behaves is considered a success, but at the Kilby Court 20th Anniversary Block Party, the audience was impressive. That never happens. The perfect concert goes on.

Ritt Momney was the first band the take the main stage. My notes describe them as “pop-sexy,” despite the golf dad attire of the front man and lead guitarist. “He has a nice voice,” commented the gentleman to my left during the audience favorite “Young Adult.” Ritt Momney harmonizes well too, I noted. The people I’m sitting by at this point are other writers and media people. We all share a nice moment relaxing in chairs under a tree before the guitars fire off on the other two stages and we never get to sit down again.

This first rush lands me at the Spyhop stage where Blue Ribbon Boots are playing. All the bands are playing really well on this Saturday. I won’t mention it going forward, so consider it a general assumption amongst the stages. Like all good Kilby Court attendees, I’m looking for the diamond that’s still a bit of a rock. This quality could be found on the Spyhop stage. A band like the Sardines almost remind me of a young Modest Mouse. I once saw a young Modest Mouse and, at the Kilby Court party, thought to myself, “by-gawd these guys remind me of that.” My notes for Blue Ribbon Boots read, “Charismatic Gravy/Good Crowd skills.” This means they’re smooth. I loved how brave the bands on the Spyhop stage were that day. Coming from the grunge-era, I grew up with singers hiding behind their microphones and having self-deprecating attitudes about stage presence. It was so nice to see the (and I quote from my notes) “Kick your door down with fucking rock!” bravado of these bands. Stay brave young artists! The crowd at the Kilby Court 20th Anniversary Block Party, as well as those of us at SLUG Magazine, will always get your back.

“The crowd at the Kilby Court party got to see bands uniquely placed for this event only.”

Traveling between the three stages reminds me of all the times I’ve rushed to Kilby Court to catch a band or song. This event, though giant, still feels like a Kilby Court show. The venue hasn’t lost itself in the celebration. This anniversary was doing everything an anniversary should: remind you why it stays around. Joshua James and The National Parks both have ties to Utah, as they did a bit of their early rising in these parts. My notes for Joshua James read “Awkward Badass.” Listening to an album never really conveys the rapport between performers and their audience. You only see these qualities live. After each of the first six songs Joshua James said “Thanks, here’s another one.” I can appreciate the brevity of a small time slot and squeezing in songs, but this was so brief it was comical. We all just stood in awkward silence and listened to the shuffling noises coming from the stage. All of a sudden, BOOM, Joshua James drops into a subtle riff that grows into epic bad-assery. Hence, “Awkward Badass.”

Years ago, I reviewed The National Parks Until I Live album and wrote, “This is a wonderful local band who won’t be ‘local’ for too long.” Basic and undeveloped sentiment aside, this felt like a band fit for the Utah mountains I’ve spent my life in. Seeing The National Parks play with snowy mountains in the background was a breathtaking visual. These types of stages are not generally in these locations. The crowd at the Kilby Court party got to see bands uniquely placed for this event only.

Death Cab for Cutie was the big draw for the day and they, as the legend goes, played at Kilby Court while getting their start. This, in fact, happened back in 2001. I was curious to see the indie megalodon address this on stage. Ben Gibbard feels like such a giant presence and he, like all of us now, once wandered this hallowed court. The thing with DCFC is that, aside from a 12 minute version of “I Will Possess your Heart,” they played everything pretty close the radio cut. Many concert goers want this, but the Kilby Court audience is typically the type that likes the 32–minute version of The Smiths’ “How Soon is Now.” I wanted to see DCFC be human, not practiced. I wanted a flash of that 2001 band. I got my wish 2/3rd’s through the set when Gibbard started speaking to the audience. To my own education, I learned that Kilby Court wasn’t always the nice little area it is now. Gibbard spoke about the importance of giving bands that initial opportunity to share their music. All throughout the festival, posters, stickers, signs and stands represented bands that had passed through the court. Many have gone on to be career musicians. Gibbard personally thanked Kilby Court for existing. He then treated the Kilby Court 20th Anniversary Block Party to DCFC’s current single, “Northern Lights,” and the sun sank accordingly. A few songs later, we all shuffled out thinking the same thing: “In five years, we’re doing this again right?”

It’s important to challenge perfection. Thanks Kilby Court for an excellent time.