SLUG Mag Soundwaves
Episode #392 – Homephone
00:00 / 17:29
Spotify Stitcher
RSS Feed
Share
Link
Embed
Monday, April 24 was "Haight-Ashbury" night at The Urban Lounge, as every band performing that evening either contained an element of psychedelia and surf-rock, or overall had a feel that would make you think you were hearing a garage band playing from somewhere in that area during the 1960s. 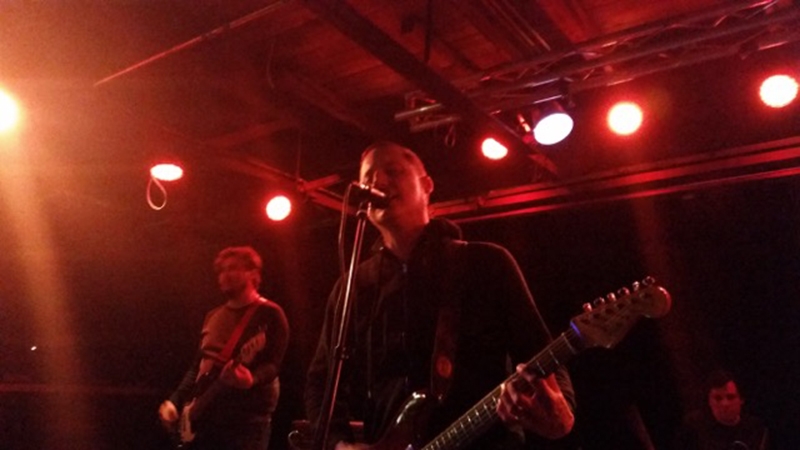 Monday, April 24 was “Haight-Ashbury” night at Urban Lounge, as every band performing that evening either contained an element of psychedelia and surf-rock, or overall had a feel that would make you think you were hearing a garage band playing from somewhere in that area during the 1960s.

Local band Starmy kicked the evening off. I’ve liked the music of Starmy ever since I heard them on the “Death By Salt” compilation that was released in 2004, yet I had never gotten the chance to see them until this show, and I’m really kicking myself that I waited this long.

They really are the template for great garage rock. Their music—an upbeat, excellent reminder as to what musicians can do with only three or four chords and a ton of talent—had elements of a heavier blues in the vein of early Eric Clapton, with ZZ Top and some Creedence Clearwater Revival in the mix. Although their rock numbers were great, it’s their “softer songs”—as guitarist/vocalist Mike Sartain calls them—where Starmy REALLY shine. They craft a sound that puts one in the mind of a psychedelic Cheap Trick. Please don’t make the mistake I did and check these guys out ASAP!

Up next was Brooklyn’s Shark? This was a band that I spent a good two hours digesting after the show had ended. I liked them, they were extremely unique—I just had to figure out exactly what it was I had just heard. The drums, bass and rhythm guitar would play something that almost had a late ‘70s surf-punk feel to it, with alternative/grunge progressions thrown in for good measure. Then the lead guitar, played by Jared Hiller, sounded as if Thurston Moore jumped on stage and began playing dissonant, atonal passages with a slew of effects that added more texture than melody … but it worked! With this juxtaposition, they always sounded like they were on the edge of a complete trainwreck, but they walked the line perfectly and made for a truly exceptional listening experience.

Los Angeles’ LA Font was the only band of the evening that was out of place. Not because they didn’t fit with the rest of the acts from a musical standpoint, but rather because the execution of their music did not live up to the same levels as the other bands performing. Their music was broken up into three distinct parts: verses (which sounded like a warmed over ‘70s Talking Heads), choruses (which had a very commercial anthemic feel to them, in the same vein as Weezer) and vocals (which rarely, if ever, veered towards being on key, and sounded a lot like Tom Verlaine going through puberty). LA Font have a lot of potential. I can’t say that they were completely disposable and not worth anyone’s time, because there were glimmers of greatness. If they could focus on their choruses and building a verse, as a song base, that didn’t have such a poorly-derived sound and lived up to the benchmark of those choruses, then musically they could be great.

Locals Koala Temple finished the show … well, more like almost finished themselves. They are a band who is willing to nearly kill themselves onstage to entertain an audience. Each member—Craig Murray (lead vocals/guitar), Josh Brown (bass/vocals), and Taylor Clark (drums)—put every ounce of energy that they possibly had on that stage. From Clark beating the skins so hard that they sound like they would topple over from the pounding, to both Brown and Murray jumping and flailing with reckless abandon. Murray put it out there the most though, by pounding and playing his guitar with such intensity that by the end of the set he had ripped off part of his thumbnail on his strumming hand, causing blood to run all over his fingers.

The great thing about Koala Temple was that their music was just as exciting as their stage antics. Much like the band Shark? before them, Koala Temple are able to combine different musical elements that, at first glance, doesn’t seem like they would work together, but are able to pull it off exceptionally. The drums and the bass would typically play something that had a really funky groove. Brown’s bass lines walked all over the neck and Clark’s drumming was exceptionally solid. The feel and tightness of their playing got a majority of those in attendance shaking their booties by the end of the night. Murray’s guitar playing, though, held some of the garage-rock sounds of a band like The Ventures with heavy reverb and a Middle Eastern flare (that hints at elements of The Velvet Underground). As a frontman, he was unstoppable. There were points in some of the songs where the drums and bass would keep going alone and Murray would address the audience in a very free-form way like Jim Morrison. He would point at audience members, say a line or two of some poetic relevance, hit a chord or two on his guitar and then go back into his sermon.

Overall, by the time Koala Temple ended their set, both they and they audience were completely spent from such an amazing evening of great rock n’ roll.