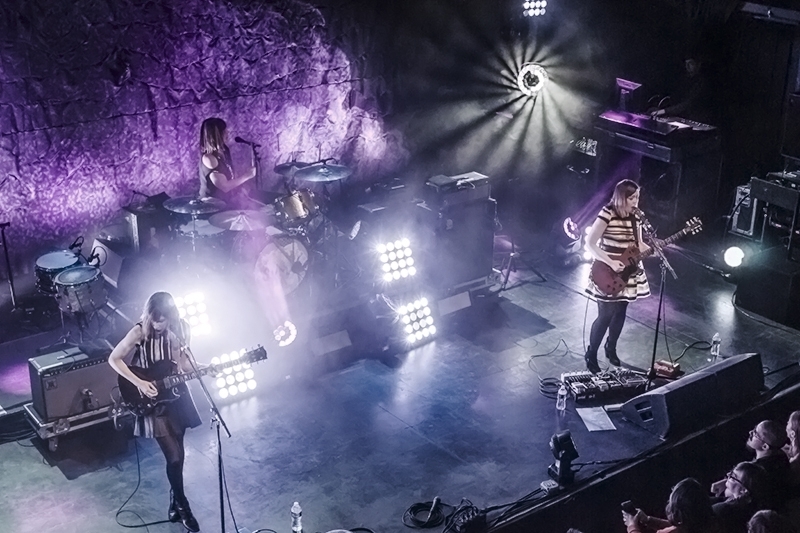 Sleater-Kinney plays a sold-out show at the Depot on their first tour in nearly a decade. Photo: www.mikeybaratta.com

For weeks, all forms of communication in the SLC music grapevine have chattered away about the most anticipated show of the year: Sleater-Kinney playing The Depot. My introduction to the legendary Riot grrrl group came from the short lived SLC band Modern Girl—as they had derived their name and philosophy from this obvious influence. I dug deeper into the roots of Modern Girl’s initial inspiration and quickly gained a keen interest. Fast-forward two years, and tonight this interest has turned into a fevered excitement that threatens to overwhelm my attempt to calmly catch the bus to the gig. It is all I can do to not bolt down my street exhibiting sheer excitement. However, I do have one concern regarding the expectations surrounding the show—whether it can live up to the hype of an army of devoted fans, or if it will fall dramatically short and bust.
After a long journey across town and a 30 minute wait in line—during which I revisited my love for Shocking Blue—I finally get into the venue. I sell what’s left of my soul for a refreshing pint of Trader Session IPA and race to grab a table so that I may observe the ever increasing number of people filing in. Tonight has brought out a diverse array of fans. Some are younger, but many look as if their heyday may have actually been in the 1990s. There is a notable difference in the atmosphere however. Unlike other gigs where the male presence is notable, most of the people here are women or others whose gender identity is non-male. In a way, I find that there is a certain aura of confidence and belonging that envelops the room and that is something that I have not seen at many other shows. Speaking of the audience, concert-goer Lindsey says, “They are intense fans.”
Lizzo starts off the night with the Hype Grrrl DJ Sophia Eris providing a digital education of Riot grrrl hits that includes La Tigre and The Runaways’ “Cherry Bomb.” Eris doesn’t play whole tracks—just enough to get you interested. After a few minutes of warming up, she switches to the “Imperial March” to introduce Lizzo as she takes the stage much to the excitement of the audience. She delivers a solid array of alternative hip-hop numbers, including “Faded” and “Paris.” Though it doesn’t quite grip me, my feeling on the matter is in the minority as the crowd clearly digs it.
Lizzo takes time to address her audience on the importance of social causes like Feminism and Police Brutality. During these brief addresses, the audience applauds and cheers, displaying that they are clearly on board with the hot button topics. It’s cool to see social awareness promoted through music, as it seems to be a thing that is unfortunately not done often enough. Lizzo’s last number gets the crowd to go wild and jive about. Her performance is met with the clear appreciation of the crowd and I would not be surprised if she gained some new fans.
Luckily, the wait between sets is short, and when the lights dim, the audience erupts into cheers to welcome Sleater-Kinney onto the stage. Before them is a captivated crowd that has eagerly waited months to witness the anticipated return of the Riot grrrl icons and believe me, they got what they paid for. Sleater-Kinney appear with a cool charismatic energy and, with a flawless intensity, knocks out numbers like “Price Tag” and “Fangless” to the ecstatic mass of jiving bodies. The difference between the back area of the venue, where I am, and that of the dance floor is notable as electrifying energy put off by the crowd gyrating about exhibits a raw feel that those in the back can only taste rather than experience in full. Though, the feeling itself is almost intoxicating.
The introduction of their new material is widely accepted and eagerly absorbed—though this not a surprising. Things get noticeably heavier upon the introduction of the signature tunes “No Cities to Love” and “No Anthems” from their new album. After temporally bowing off the stage after “Jumpers,” Sleater-Kinney return with a high energy encore an encore, starting off with “Gimme Love,” which shows off Corin Tucker’s impressive ability as a formidable front person. Much to mine and I’m sure the audiences appreciation the last number for the encore is “Modern Girl.” During this song, I hear much of the crowd singing along and one eager fan exclaims “I love this song so much!”

The conclusion brings on an eruption of applause that echoes throughout the room. I’m sure that if Sleater Kinney so desired, they could have continued on with their dazzling performance and nobody would have minded in the least. This was a solid gig that exceeded all expectations, and that’s a first.

Check out M.A.BARATTA’s gallery for this excellent show!