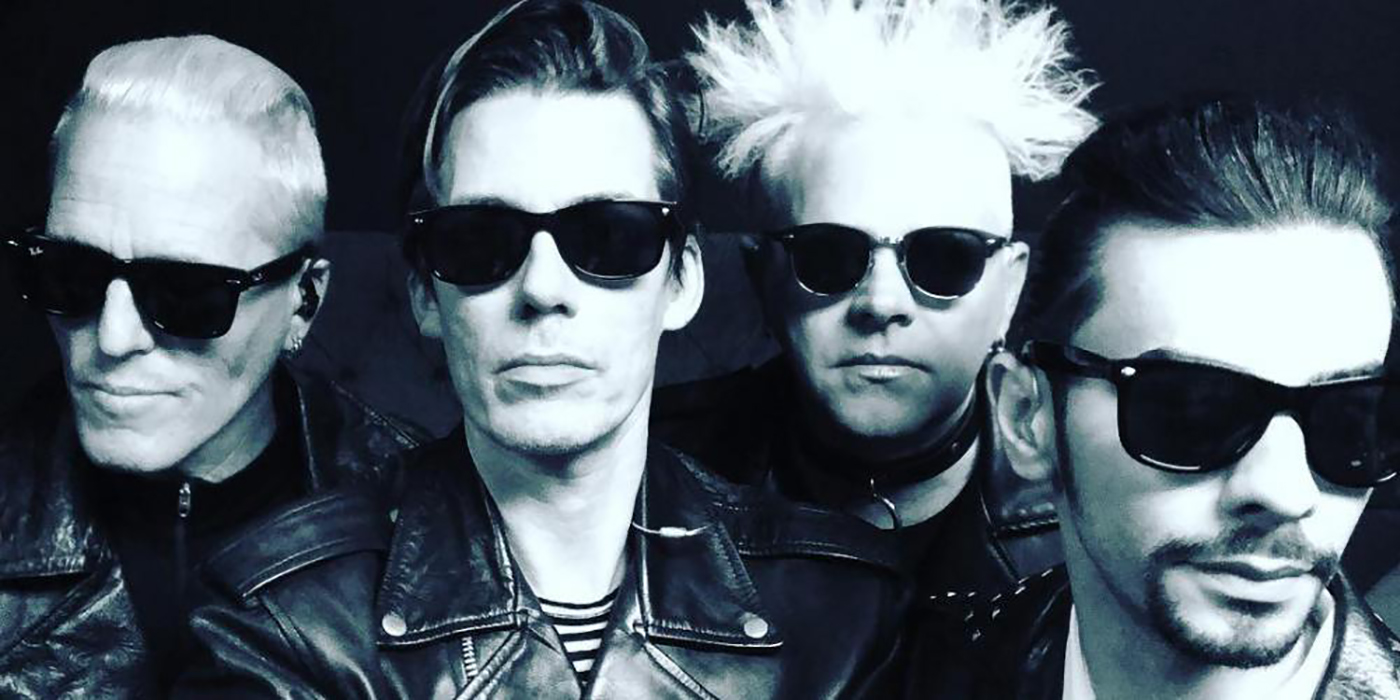 Strangelove is one of those rare and refined tribute bands that rejuvenates one’s faith in the power of professional imitation. From their shockingly skilled Dave Gahan doppelgänger to their actual involvement with members of the original band to their onstage performance chops, these four withstand the strict assessments of Depeche devotees like myself. At this group’s first visit a year ago, I was fully immersed—even as a decades-old fan of the original with an appropriately educated and discerning ear. At moments, I was capable of imagining myself at a DM show circa the early ‘90s—having imbibed several of the genuine article, including massive gigs in Los Angeles—against which to compare this agile “mockstar” foursome.

Electric Duke warmed up the evening with a deft Bowie impersonation alongside Strangelove’s own members—including skilled guitarist/Martin Gore simulaid Brent Meyer—and plenty of warbling, slithery swagger to mimic their stardusted master via Julian Shah-Tayler. Several expected hits such as “Heroes” as well as dark horse Bowie cuts including “I’m Afraid of Americans” helped work the crowd into anticipation for the headliners as said audience collectively progressed towards greater inebriation.

Strangelove has a solid local following, as evidenced by the wide array of multi-decade DM tour tees and lip syncing along with the setlist of stellar tracks from a band with one of the most impressive catalogs in popular music history. Per Brent Meyer’s attestation and corroborated by their performance stats, the foursome are a wholly successful international touring act, with major arena sell-out shows and a full statement of support from Depeche Mode’s primary songwriter, Martin Gore. Meyer indicated that the band had recently come from a reeling circuit of Australia amidst the chaos of wildfires, with an impressive show of support from the audience, especially as the actual Depeche had not made the rounds to Oz for many years.

“At this group’s first visit a year ago, I was fully immersed—even as a decades-old fan of the original with an appropriately educated and discerning ear.”

The dedication of Strangelove is notable, as are their collective professional backgrounds and personal projects. The band’s Alan Wilder mockup (aka the aforementioned Shah-Tayler) recently finished a record for his original project, The Singularity, with production by Robert Margouleff, whose client list includes the real Depeche Mode, Devo and Oingo Boingo amongst others. Strangelove’s Gore counterpart Meyer acts as Music Director and ran the largest tribute band booking agency for a decade before he became too busy touring Strangelove internationally, a dilemma any professional muso would crave to suffer through. At the time of their visit to our stage, the band is working on a symphonic iteration of the project and are coordinating with Depeche Mode’s consummate neural network—aka the genuine Martin Gore.

Furthermore, former Depeche member Alan Wilder provided Strangelove with original custom samples from their album and tour catalog to utilize in the show. Gore has also provided the group with synth programming guidance. The end result is an inarguable sonic authenticity worthy of serious appreciation by devotes and less erudite of audiences alike.

Frontman Leo Luganskiy is entirely dedicated to the craft of embodying his predecessor Dave Gahan, including the apparently inexhaustible energy, but seemingly sans Gahan’s peak-era opiate dependence. Luganskiy is an actor and musician alongside his Strangelove presence, having had several noteworthy  projects. The video to his new single “BRDRLNE” includes appearances by none other than Christopher Hardwick from the canonical Depeche Mode:101 D.A. Pennebaker documentary. Luganskiy gave a nearly limitless stage performance, utilizing his acting chops and what he attests was the better part of a year to hone the particular swagger for which Gahan was known. Every aspect, from wardrobe to Basildon-Essex accent to the dervish-esque mic stand spin are spot-on. Luganskiy reports that his onstage performance is now entirely natural, which seems accurate based on the seamless and organic nature in which he manifests the legendary frontman in aesthetic and personage.

Small technical difficulties didn’t cease the dedication of Strangelove, and even a swathe of monitor and reverb problems of the venue failed to halt their professionalism. The band gives eager audiences a well-tuned time capsule of the best that one of history’s finest and most lasting electronic acts ever offered. It’s apparent from two recent stops in Salt Lake that they can afford to shoot for larger stages and a more polished local venue on their next stop, reportedly sometime toward the end of this year. Strangelove concluded their midnight-closing set with the classics “Enjoy The Silence” and  “Never Let Me Down”, the selfsame super-hits with which the genuine Depeche end their soaring stage productions, crowd arms aloft and swaying along as expected. A shirtless “Ultra Dave” encore of the Black Celebration deep-cut “But Not Tonight” ended Strangelove’s awesome set. Truly not even a squint of the eye or removal of the spectacles is required to feel immersed in the uncanny Depeche Mode energy of Strangelove. As a dyed-in-the-wool, lifelong Depeche Mode devotee, I’m always impressed by this stellar foursome, as any of the DM fandom would be.

Find Strangelove touring the US now and at depechetribute.com,  IG: @strangelovetribute.