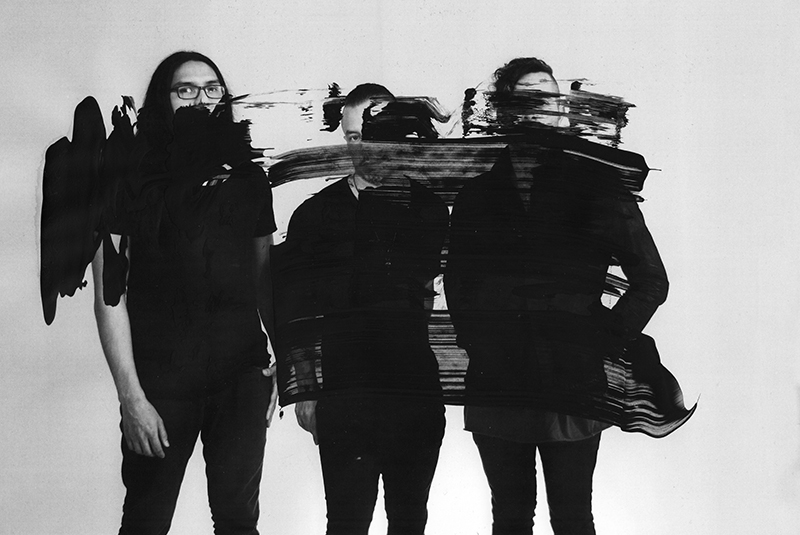 As black-clad concert goers slowly trickled into Urban Lounge on Wednesday night, I immediately noticed the intensity of opening performer, SRSQ (aka Kennedy Ashlyn, formerly of Them Are Us Too), as she glided around the bar and stage areas. With the crowd still trying to gain their bearings, and with most of them wearing the bold, triangular logo of headlining band The Black Queen, SRSQ wasted no time jumping onstage and kicking off the set with her synth-pop, dream-like song “The Martyr.” SRSQ’s set, and especially “The Martyr”, imparted an undertone of sorrow. Her lament was specifically in reference to the passing of Ashlyn’s musical partner in Them Are Us Too, Cash Askew, who died in the Oakland Ghost Ship fire of 2016. The grief-stricken weight of this song and SRSQ’s entire performance was evident as tears dripped from her face onto the stage floor throughout the set.

SRSQ immediately enraptured the audience with her hypnotizing vocals and passionate performance. Despite having to stay physically planted near her collection of synths, keyboards and pedals, Ashlyn kept her stage presence with theatrics. Her face grimaced in between breathtaking vocal phrases and her movements ranged from the serpentine to pure aggression. In one of her songs, her tone was almost operatic while she played with a vocal effect that deepened her voice to add an grotesque, monstrous quality to the song. With the minimalism of a solo act under simple, red lighting, SRSQ made an impression on the audience with her impressive voice and raw emotion.

Was Urban Lounge the right venue for Uniform? I’m not sure.

Falling under the broad umbrella of industrial music, second act Uniform strayed from SRSQ’s melodic style into raw, gritty noise. Multiplying from a solo into a duo, Uniform is comprised of vocalist/producer Michael Berdan and guitarist Ben Greenberg. Uniform channeled utter chaos, and Greenberg’s sludgy, unexpected guitar riffs cut through the buzz of the background drum and bass tracks. As a singer, Berdan channeled something feral and almost hellish, his eyes gapingly wide as he screamed incoherently, waving the mic stand wildly while black-and-white stills from The Exorcist flashed in the background.

Was Urban Lounge the right venue for Uniform? I’m not sure. For the most part, the noise of the tracking blended together too much to make anything other than Greenberg’s guitar riffs really coherent. I couldn’t really hear anything Berdan was singing, only that he was screaming.  Personally, I think Uniform elicits more of an open venue, and preferably one with a mosh pit. That being said, Greenberg’s guitarwork was intricate and unexpected, and there is something really impressive about the merging of a full, hardcore band’s sound with the buzz of synths and industrial music coming from just two people. For me, Berdan and Greenberg’s energy onstage compensated for an entire band.

Straying from Uniform’s disorienting chaos and SRSQ’s emotional toil, there was something effortlessly dark and sexy about The Black Queen’s performance.

The Black Queen, a three-piece electronic act featuring Dillinger Escape Plan vocalist Greg Puciato, channeled a more slow-burning, dark synth-pop act that really makes use of Puciato’s impressive vocal range. Along with Puciato are Joshua Eustis (Puscifer,Telefon Tel Aviv) and Steven Alexander Ryan (Puscifer, NIN) as well as a cascade of visuals projected on the screen behind them and a perfectly timed light show. By the time The Black Queen took the stage, the crowd was neatly packed in, hanging on every line Puciato sang. While it took a minute to really dial into what Ryan was doing on guitar over Eustis’ synths, TBQ had a set that was visually, as well as audibly, appealing.

Straying from Uniform’s disorienting chaos and SRSQ’s emotional toil, there was something effortlessly dark and sexy about The Black Queen’s performance. Every piece seemed to build, highlighting Puciato’s vocals. For me, TBQ was the most palatable group of the evening—this was easily reflected in the range people TBQ seemed to bring in. Eustis, in the corner on synths, wearing Uniform’s merch and round-rimmed sunglasses, paired with Ryan on guitar, with a black, leather jacket and long black hair covering his face, imparted an almost Matrix-like visual appeal. Their onstage interactions with Puciato seemed synchronized through the rich, almost romantic tunes that they churned out together, bringing the night to a satisfying conclusion.

The balance of SRSQ’s emotionally wrought performance, Uniform’s chaotic energy, and The Black Queen’s chilly, melodic synths made for a very interesting and musically diverse night. Having gone into the show only really knowing SRSQ’s music, I came out a solid fan of all three acts, as well as an acute case of Tinnitus from the noise.

More on SLUGMag.com:
Review: Them Are Us Too – Amends
Review: Uniform – The Long Walk