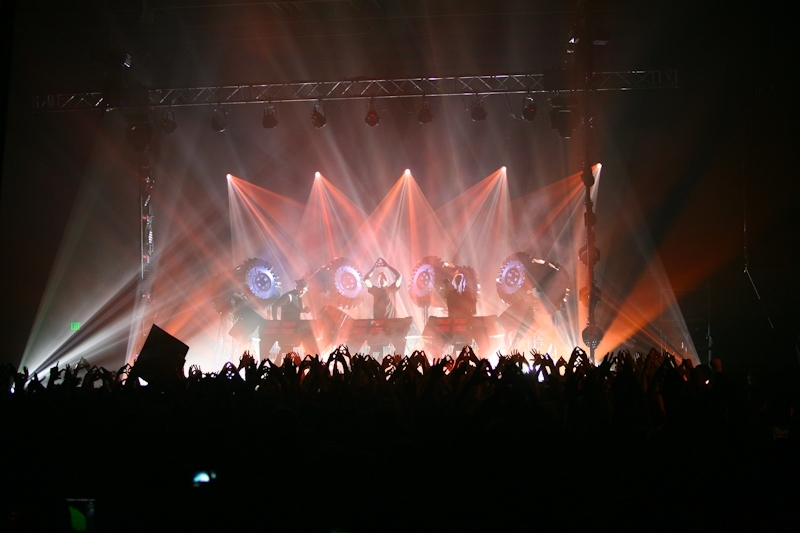 The Glitch Mob at The Complex 04.28 with Penthouse Penthouse, Asa Sia

Similar to seeing a movie for the second time, going to a show multiple times during the same tour gives you the chance to notice new things, as well as how a band has progressed since the start of the tour. Since seeing the Glitch Mob begin their tour in New Orleans, catching a few brief moments of their show at Coachella and now, finally in Salt Lake, I was able to really soak in the hard work and dedication they put into their current tour, in promotion of their new album Love Death Immortality. Not to mention, this tour is probably the most mind-blowing, out of this world electronic show I’ve been to recently.

Since beginning their career in 2006, as a five-piece in California, The Glitch Mob has now blossomed into one of the most innovative electronic groups of their time. Since the release of their first album in 2010, The Glitch Mob has become a crowd favorite among a vast range of electronic fans around the world from raver groupies to festival junkies (as in people addicted to concert-going, not actual junkies⎯though they’re entitled to like The Glitch Mob too) and even burners. Their latest album, which was released earlier this year on Glass Air Records, has gotten heaps of good praise from a wide platform of review outlets and had a debut ranking at #13 on the Billboard Top 200 chart, with a #1 ranking on the Billboard dance/electronic chart.

I arrived to the venue just as the group was performing their hit “I Need My Memory Back,” off of their latest album to a packed house. The groups’ new booth set-up, which features three separate areas for each member, with four iPads that lean towards the crowd used to DJ, and four wind turbine-like drums set behind them, with lighting that silhouettes the entire area, has been a huge hit amongst crowds throughout their tour. As I said before about the group being innovative, they demonstrate that on this tour, both visually and in their one of a kind hard-rock inspired electronic sound. Throughout the show, the trio performed a variety of both old and new tracks from both of their albums, but kept consistency in their sound despite the differences between the two.

In between songs, different members of the group would grab the microphone to repeatedly thank the crowd for coming to their show, even mentioning how thankful they were for such a big audience that supports of independent music. The group, who started their own label in 2010, has been releasing their music independently since the release of their debut album, Drink The Sea that same year. The group finished the show with what I would call their biggest hit, “We Can Make the World Stop,” off their debut album before coming back to perform one more single from their latest album.

For what it’s worth, I’ve never been disappointed by their shows, whether it be in front of a few thousand in the Sahara Tent at Coachella or in front of fifteen people at a secluded Burning Man sound camp. The group always impresses and takes an electronic show to the next level by actually performing rather than simply DJ’ing to a room full of people. “I saw them play a few years ago and it definitely wasn’t like this,” a friend of mine mentioned to me as we were leaving the show. The group has had a quick climb to the top over the last few years, but proves worth it on their latest extensive tour. Love Death Immortality is available for purchase on iTunes and if you weren’t at their show Monday night (I’m sorry) you can view a sample of their latest booth set-up in their video for Beyond Monday.